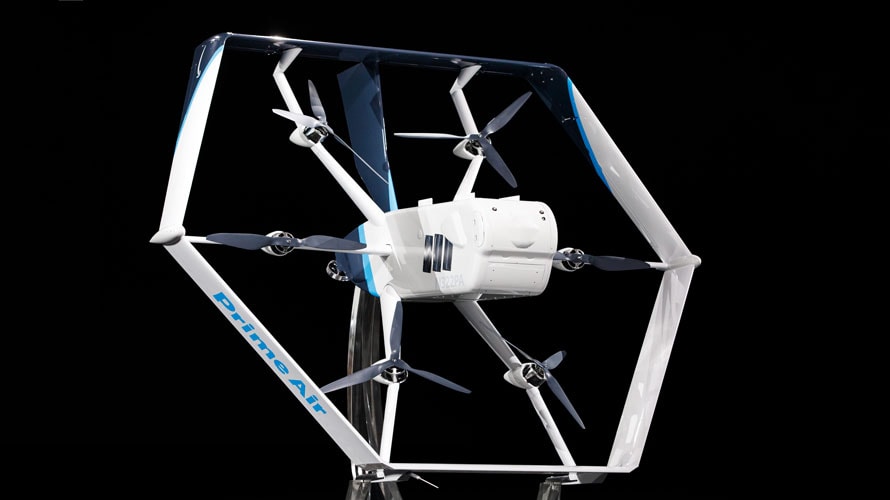 Move over, one-day delivery. (As long as your package is 5 pounds or less.) - Credit by Amazon

In 1984, Domino’s 30-minute delivery was a revolutionary offer for pizza, which arrived by cars.

Today, the stakes are higher, literally and figuratively. And it just so happens Amazon revealed its latest Prime Air drone design on Wednesday, which it says can fly up to 15 miles—but the packages it ferries must weigh less than five pounds.

In a blog post, Jeff Wilke, CEO of Amazon Worldwide Consumer, said the platform’s fulfillment and delivery network should allow it to scale drone delivery “within months.”

Wilke stressed safety via special wing features and said the drone will refuse to come into contact with objects in its path, which will prevent accidents. He also noted the drone can take off and land vertically like a helicopter, but it’s also aerodynamic like an airplane and can transition between the two in flight.

“We employ diverse sensors and advanced algorithms, such as multi-view stereo vision, to detect static objects like a chimney,” he said. “To detect moving objects, like a paraglider or helicopter, we use proprietary computer-vision and machine learning algorithms.”

Amazon says drone delivery requires a small area clear of people, animals and obstacles, and Prime Air drones are capable of finding such an area.

“We determine this using explainable stereo vision in parallel with sophisticated AI algorithms trained to detect people and animals from above,” Wilke said. “A customer’s yard may have clotheslines, telephone wires or electrical wires. Wire detection is one of the hardest challenges for low-altitude flights. Through the use of computer-vision techniques we’ve invented, our drones can recognize and avoid wires as they descend into, and ascend out of, a customer’s yard.”

Wilke said Amazon knows there may be times when even one-day delivery is not the right choice for consumers—and Prime Air will help Amazon reach its goal of making 50% of shipments net zero carbon by 2030.

“When it comes to emissions and energy efficiency, an electric drone, charged using sustainable means, traveling to drop off a package is a vast improvement over a car on the road,” Wilke said. “Today, most of us run to the store because we need an item now. With a service like Prime Air, we’ll be able to order from home and stay home. This saves tremendously on fuel usage and reduces emissions.”

It’s been a two-and-a-half-year wait since the first autonomous Prime Air delivery in England in 2016. Amazon said it would deploy the service “when and where we have the regulatory support needed to safely realize our vision.” It has Prime Air development centers in the U.S., the U.K., Austria, France and Israel and said it is testing drones in multiple international locations.

But it was actually drone startup Flirtey that conducted the first autonomous FAA-approved drone delivery in the U.S.—for 7-Eleven, of all retailers. The package reportedly included Slurpees, a chicken sandwich, donuts, coffee and candy. (A stunt from the Flower Council of Holland came a few months prior, dropping roses on unsuspecting lovebirds and lonely hearts via what it called Cupidrone in Verona, Italy, on Valentine’s Day 2015.)

Flirtey has also worked with Domino’s in New Zealand to enable pizza delivery via drones.

Chinese ecommerce platform JD.com, however, is pretty advanced, comparatively speaking. It has been testing drone delivery since 2016 and now boasts a network of seven drone types, more than 100 drone routes and over 400,000 minutes of flight time.