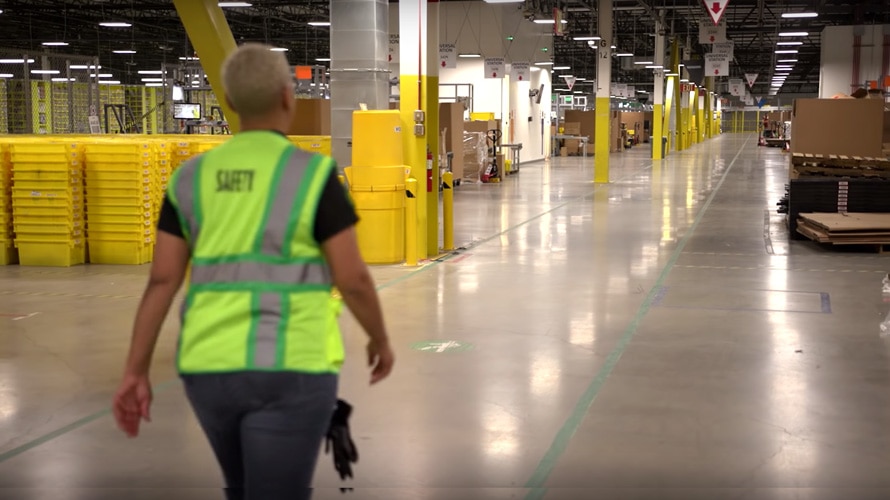 A new report from the New York Committee for Occupational Safety and Health (NYCOSH) says Amazon needs to stop meddling in workers’ efforts to unionize and to reduce line speeds in its facilities.

The report is based on interviews about psychological and economic stress, as well as occupational pain and injuries, with 145 workers at Amazon’s warehouse in Staten Island, N.Y. As a result, NYCOSH concluded Amazon prioritizes productivity over workplace health and safety.

For example, the committee said 80% of Amazon warehouse workers feel pressure to work harder and/or faster. One employee in Staten Island said the quota system requires them to handle at least 2,000 units per day, which works out to four items a minute. In addition, to boost efficiency, NYCOSH said Amazon has software to optimize product storage and travel routes for pickers, but it doesn’t necessarily have workers’ best interests in mind.

“Analysis of such models show that, too often, they prioritize management-oriented efficiency criteria at the expense of human factors, such as worker health and safety concerns,” the report said.

The study also found the majority of workers in Staten Island are experiencing some kind of discomfort:

In addition, 18% of workers at Amazon’s Staten Island facility said they’d been injured as a result of their work, which NYCOSH noted is triple the average of warehouses nationwide. 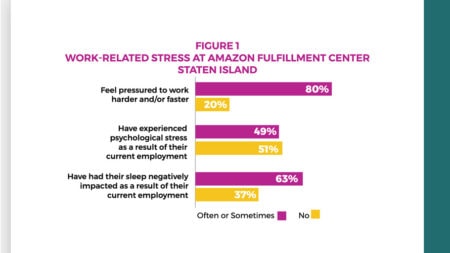 “NYCOSH’s report shows the impacts at just one facility, in just its first year of operating,” wrote Stuart Appelbaum, president of the Retail, Wholesale and Department Store Union, in a statement. “Operating at speeds where ‘80% of workers feel pressured’ means Amazon needs to hire more workers, under more sustainable speeds that don’t put worker’s lives in jeopardy. Amazon needs to understand that human beings are not robots.”

A spokesperson for Amazon said the Staten Island facility has 4,500 employees, so NYCOSH surveyed less than 3% of its workforce there. In a statement, Amazon said NYCOSH is a “a union led organization run by private committees focused on generating false narratives in an effort to create interest and potential revenue for the unions they serve” and included “selective data skewed to support false statements by an organization that’s sole business objective is to misinform the public on Amazon’s safety record.”

In fact, one worker cited in the report described working in an Amazon warehouse as “a full body workout, all day, every day.”

In Adweek’s own tour of a warehouse in Edison, N.J., we saw vending machines throughout, which our tour guide said housed free products like box cutters and gloves to help employees do their jobs. However, a recent profile in the New Yorker said these vending machines also carry over-the-counter painkillers—and employees line up for them.

In response to calls for reform in Amazon warehouses earlier this year, a spokesperson encouraged skeptics to book a tour to see Amazon’s warehouses for themselves. Amazon reiterated this sentiment in response to the NYCOSH report.

To be fair, Amazon raised its minimum wage to $15 last year, which it followed with a $700 million program to “upskill” 100,000 U.S. employees. But warehouse workers continue to stage walkouts over issues like workplace safety and scheduling.

And, NYCOSH said, the workplace safety part at least has more far-reaching consequences.

“Workers who develop [musculoskeletal disorders] are ultimately forced out of the workforce and into disability,” the report said. “This has a ripple effect, impacting not only the workers’ individuals lives, but also those of their families, as well as financial ramifications for the community at large.”

Instead, NYCOSH said, Amazon should reduce its line speeds and implement ergonomic interventions—and, if it has not already done so, NYCOSH said Amazon should perform a risk assessment of the tasks it requires employees to perform and encourage injury reporting among employees.

Here’s the kicker: NYCOSH said Amazon should also remain neutral in workers’ efforts to unionize—which includes not terminating employees involved in unionizing efforts—and “allow the workers to make this decision for themselves.”

NYCOSH said unions can contribute to the improvement of health and safety at Amazon as studies in the U.S., Canada and Great Britain have demonstrated lower injury and illness rates among unionized workforces.

Amazon has not exactly been receptive to unions so far.

In July, Adweek asked about a job listing for an employee relations manager with “seven years direct experience in … union avoidance work, or labor/employment law with an emphasis on union avoidance.” Amazon did not respond to questions about the listing—and the reference to “union avoidance” was deleted the next day.

Three months later, it has resurfaced—albeit in muted form—in a similar listing for an employee relations manager in Herndon, Va., which says “2+ experience working in unionized settings and significant experience in handling union organizing activities required.”

NYCOSH, however, encourages Amazon to give unions a chance.

“If providing a healthful workplace isn’t enough motivation to implement protective measures, then Amazon can do so to diminish the productivity and revenue loss associated with work time lost to injury, the cost of training replacement employees and medical compensation payments,” the report added.

This story has been updated to reflect comments from Amazon.