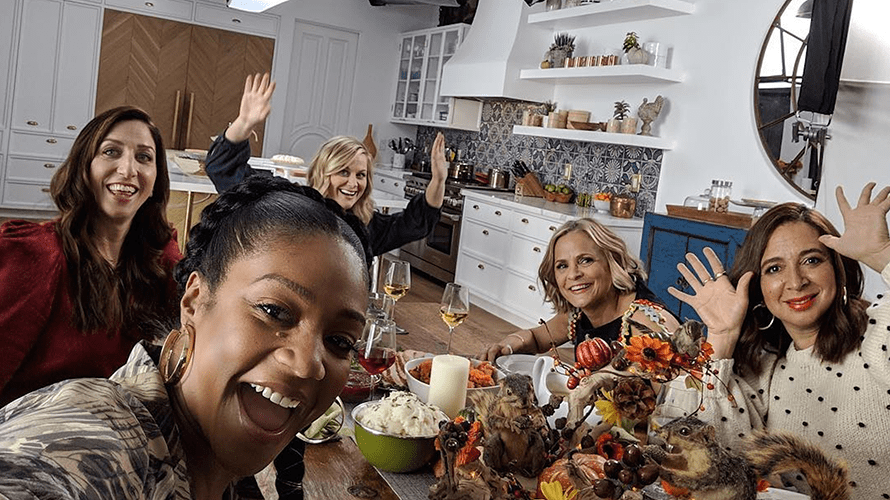 Google pulled out all the stops to promote Home Hub as a holiday helper.
Tiffany Haddish/Instagram
Share
By Lisa Lacy
|
November 22, 2018
Share

Google released its Home Hub voice-enabled-device-with-a-screen in October and wasted no time taking advantage of a holiday when Americans eat more than 44 million turkeys—which somebody has to cook—to showcase what an asset it can be in the kitchen.

Or, as a blog post put it, Google Home Hub “can be the sous chef you need for the holidays.”

To demonstrate, Google partnered with NBC to enlist comedians Amy Poehler, Amy Sedaris, Maya Rudolph, Chelsea Peretti and Tiffany Haddish for a Friendsgiving celebration that might also be the best dinner party of all time.

In a series of spots during NBC’s broadcast of the 92nd Macy’s Thanksgiving Day Parade, the women interacted with Home Hub, highlighting features like the ability to access videos for festive fall tablescapes, see who is at the front door, and view playlists, calendars and photos. (Google says Home Hub can also set multiple timers, broadcast to all a given user’s Google Home devices that dinner is ready and find recipes for leftovers by saying, “Hey Google, clean out my fridge.”)

And, of course, they did it with comedic flair, including Sedaris’ joke about “giving you the bird.”

In an announcement upon the launch of Home Hub, Google said it partnered with Buzzfeed food site Tasty to bring recipe videos to the device. And so the device got yet another pre-Thanksgiving plug from model-turned-cookbook-author—and Tasty partner—Chrissy Teigen, who called Home Hub her “new friend in the kitchen” in a video on Instagram.

“The official kick-off to the holiday season happens on NBC every year and we’re thrilled to work with Google to create unparalleled creative to run in some of our most iconic programs during the holiday season,” added Mark Marshall, president of advertising sales and partnerships at NBCUniversal, in a statement.

The high-profile stars and placements indicate Google is aggressively trying to capture the fledgling voice-enabled-device-with-a-screen market.

It, too, aired an ad during the parade, but messaging focused on connectedness. Facebook was also advertising Portal on FoodNetwork.com on Thanksgiving Day, telling site visitors, “If you can’t be there, feel there.”

Meanwhile, Amazon released a new version of its Echo Show device in September with a bigger screen and improved sound. Funny enough, the announcement also referred to Echo Show as “the perfect sous chef for your kitchen.” And, similar to Home Hub, it can provide recipes and step-by-step instructions with visuals and videos.

Amazon has not disclosed how many Echos have been sold to date, but chief executive Jeff Bezos’ 2017 letter to shareholders said, “Customers bought tens of millions.”

Research firms have estimated it’s about 30 million devices for Amazon and 14 million for Google—at least as of the end of 2017.

Amazon had a headstart—it released Echo in 2015 versus Home in 2016—but a recent report showed Google is gaining market share.