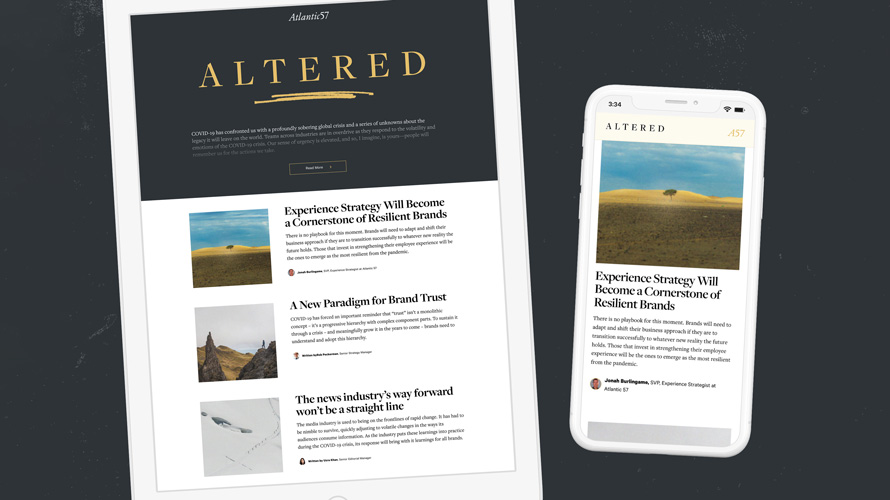 The Atlantic’s in-house agency, Atlantic 57, is creating a new platform specifically for brands and marketers navigating COVID-19 as it moves to position itself as a “brand evolution firm.”

The Atlantic’s newsroom has been aggressively covering the pandemic, an effort that put substantial coverage in front of its paywall yet still saw a surge in subscribers. Now, the consultancy firm, Atlantic 57, is releasing a new platform, Altered, to offer brands and marketers advice on navigating the same unsteady economy rocked by the coronavirus.

“We very rapidly made this pivot from thinking just simply as an Atlantic wholesaler, from just commerce and providing services and partnerships, to being more altruistic and civic minded,” said Kate Watts, president of Atlantic 57, whose evolution of the division was in the works before COVID-19 took hold in the U.S.

Some publishers have used their brand studios, like The New York Times’ T Brand Studio or The Washington Post’s WP BrandStudio, to enter the consultancy space, a different route than The Atlantic has taken with its own, separate brand studio in Re:think.

Watts said Atlantic 57 was already defining a “brand narrative” for clients, making her think how else those insights could be extended to other services of the company.

“For me, it was an opportunity to take something that was smaller and make it more holistic,” she said.

As part of Altered, Atlantic 57 will provide a range of offerings, including workshops, data and research products to its roster of that have included Allstate and Mastercard. It also kicks off with a series of pieces exploring what new trends might be on the other side of COVID-19, including what brand trust will look like for consumers.

“It was really important that clients saw us as partners no matter what—in great times and hardship,” Watts said.

Previously, Atlantic 57 has worked with clients like Chick-fil-A to create a campaign that showed what was behind their chicken sandwich, with a story rolled out on the fast food chain’s website.

The challenge facing brands (and publishers that benefit from their ad spends) is advertising around coronavirus coverage, which can be seen as not brand safe. Despite publishers ramping up coverage around this topic, and seeing historical traffic upticks and subscriptions, brands are leery to have their messaging surrounding the coverage.

With these brand marketing campaigns on pause or outright canceled, the agency workforce is also seeing an impact, particularly among freelancers who depend on the consistent work.