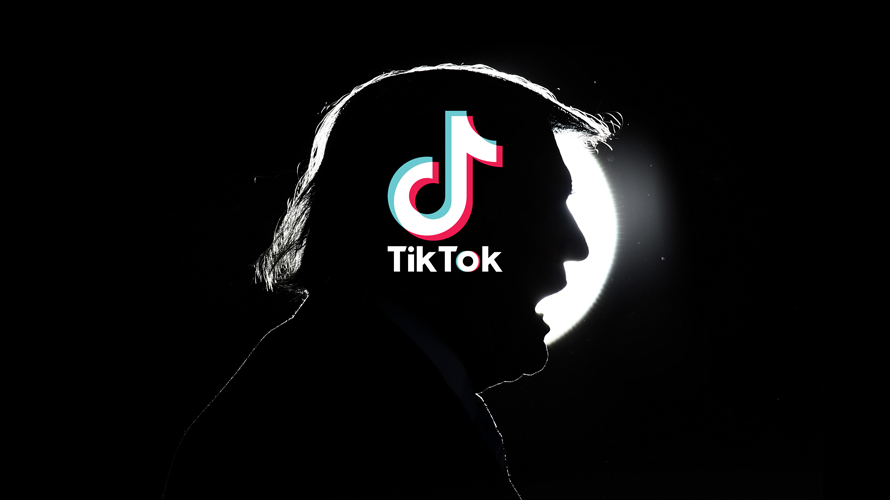 Trump has turned his gaze toward TikTok. Getty Images, TikTok

TikTok has cemented its status as a regular part of Americans’ social media diets. It’s perhaps the only entity that’s been able to break through a space crowded by mammoth incumbents like Facebook and YouTube in recent years. But with astronomical growth comes commensurate scrutiny from regulators around the world, including the United States.

While U.S. bureaucrats and legislators have had their eye on TikTok, President Donald Trump himself has turned his own gaze to the app.

Last week, the Trump administration confirmed it was considering a ban of TikTok and said it would “take actions that preserve and protect [citizens’] information” from the Chinese government, according to Secretary of State Mike Pompeo.

“I don’t think there’s any self-imposed deadline for action, but I think we are looking at weeks, not months,” White House chief of staff Mark Meadows said Wednesday.

(TikTok says its parent company, ByteDance, is now headquartered in the Cayman Islands, not in China). 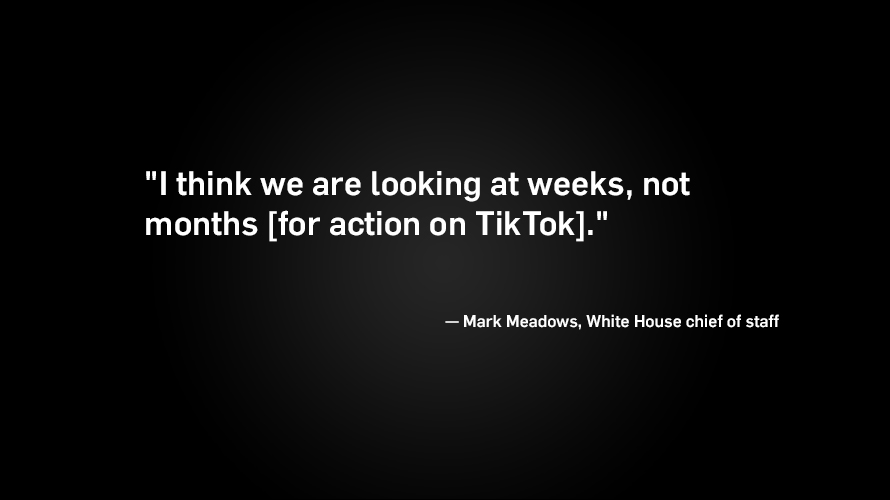 Given how much information the app collects from users—which is not much different than what U.S.-based social media companies collect—concerns abound over where that data is stored and what, if anything, is being shared with Beijing. TikTok claims data from its American users is kept in the U.S., although its privacy policy mentions that the company may share data with “a parent, subsidiary, or other affiliate of our corporate group.”

So, can the U.S. government actually ban TikTok? Experts told Adweek the answer is no, but the government does have ways it can make business much more difficult for the company.

In the past month, TikTok exited two foreign markets, one willingly and another unwillingly.

Amid escalating military tension with China, India banned TikTok and 58 other apps with ties to China on June 29, saying they “pose a threat to [the] sovereignty and integrity of India.” Days later, TikTok voluntarily withdrew from Hong Kong after officials there enacted a sweeping national security law that gives police authority to “take down internet posts” and punish internet companies’ employees if they don’t comply with data requests, The New York Times reported.

Tensions have also escalated in Australia, where politicians have called TikTok a national security threat.

Last year, the Federal Trade Commission fined TikTok $5.7 million for Children’s Online Privacy Protection Act violations by Musical.ly, the app ByteDance acquired and rebranded as TikTok, for collecting data from children under 13. And recent reports indicate the FTC is looking into whether TikTok violated its consent agreement.

In November, the Committee of Foreign Investment in the United States, a government body with the power to block or uncouple corporate mergers, announced an ongoing investigation into ByteDance’s 2017 $1 billion acquisition of Musical.ly.

And numerous government agencies, including State and Defense Departments, have barred employees from downloading the app on government phones. A Senate bill introduced by Sens. Josh Hawley, R-Mo., and Rick Scott, R-Fla., in March, would apply that same prohibition on all federal work devices.

In response to pressures in Washington, TikTok has bolstered its lobbying efforts, hiring 15 lobbyists since February and, during the first quarter of 2020, TikTok doubled its lobbying expenditures to $300,000, according to the Times.

While this sum pales in comparison to Facebook and Amazon, which each spent approximately $17 million in lobbying in 2019, it indicates that TikTok knows its biggest obstacle to success doesn’t lie in appealing to teenagers—it’s done that—but in convincing Washington it’s worthy of its trust.

There is no law that would allow Trump to completely ban TikTok, and it seems “unlikely that the government” would try to do so, said Kurt Opsahl, general counsel at Electronic Frontier Foundation. But regulators can force TikTok’s hand.

The app could face new scrutiny from CFIUS, which is reviewing the legality of ByteDance’s 2017 acquisition of Musical.ly. It also cannot ban TikTok, but the committee gained new authority in 2018 when Trump signed the Foreign Investment Risk Review Modernization Act, which let it review a wider swath of technology companies.

The committee would still need more than “suspicions” to take action against TikTok, said Michael Greenberger, professor at the University of Maryland Carey School of Law and director of the Center for Health and Homeland Security.

“If CFIUS [determines] that U.S. companies cannot enter into cooperative agreements of one kind or another with ByteDance or TikTok, that would be troublesome, but it’s not a full-fledged ban of the kind that we see in India,” Greenberger said.

CFIUS could order ByteDance to divest from TikTok, similar to its actions last year when it ordered the Chinese-based company Kunlun Tech to sell the popular gay dating app Grindr.

Brent Skorup, a senior research fellow at the Mercatus Center, a libertarian think tank based at George Mason University, said the government can also target government contractors that work with TikTok.

Apple and Google, which control app downloads on iPhone and Android devices, are both major U.S. government contractors. “If the White House can point to a national security or human rights threat from TikTok, the most direct way might be for the White House to prohibit government contracts to any company that hosts TikTok on its app store or transmits TikTok traffic,” Skorup told Adweek.

The Commerce Department also has broad authority to impose “export controls and other economic penalties” if they deem companies a national security risk, Skorup said.

This power lies in the Commerce Department’s Entity List, also known as Export Administration Regulations. American companies are discouraged from conducting transactions with companies on the list, while listed foreign companies must obtain licenses before selling goods.

While the U.S. government is suspicious of its data practices, Greenberger said, TikTok has not been charged with any crimes, and it would take more than “suspicions” of wrongdoing to place it on the Entity List.

In challenging placement on the Entity List, Greenberger said, the fact the company has an American CEO—former Disney executive Kevin Mayer, who started in June—would help TikTok’s legal case.

But the government’s response can be swift if companies are found to have committed wrongdoing.

Huawei and ZTE, large Chinese tech and telecom companies, are on the list, though both have faced criminal charges in the past (ZTE pleaded guilty in 2017 to shipping U.S.-origin items to Iran, and Huawei was charged in February with racketeering and conspiracy to steal trade secrets.) Separately, the Federal Communications Commission deemed the two companies a national security threat in June, barring them from using government subsidy money. 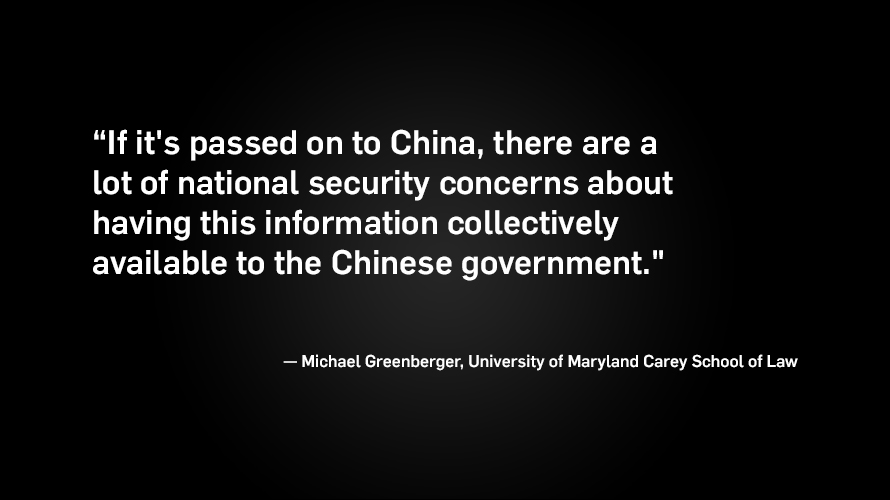 Rachel Winicov is an intern with Adweek for the summer of 2020 focusing on digital media, ad tech and social media. She is a rising senior at the University of Pennsylvania, where she studies classics. Rachel is from Philadelphia, Pa.
@ScottNover scott.nover@adweek.com Scott Nover is a platforms reporter at Adweek, covering social media companies and their influence.