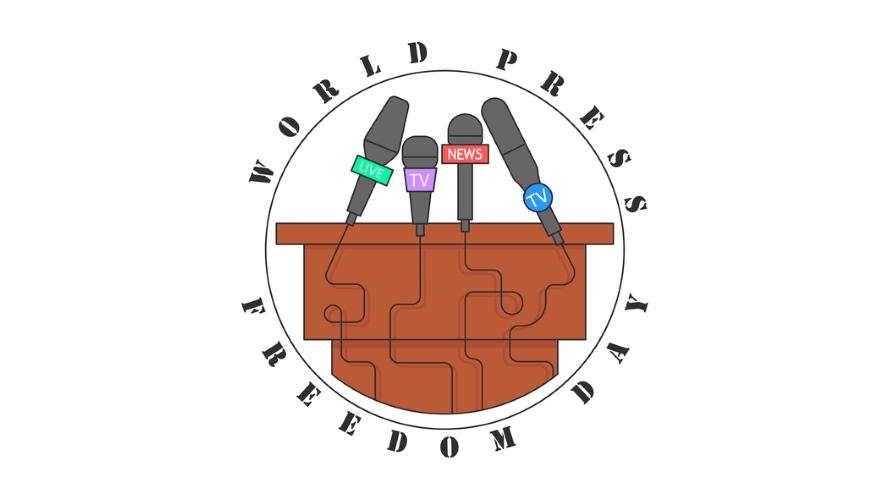 May 3 was World Press Freedom Day - Credit by Tatiana_Stulbo/iStock

This year, May 3rd’s World Press Freedom Day held more weight than it perhaps had in the past. Although the U.S. affords us the luxury of free speech compared with nations that have been accused of violently punishing or jailing journalists, the years-held, unspoken agreement between the White House and press has gradually dissolved over the course of President Donald Trump’s time in office.

Also dissolved was the social “relationship” between Trump and model/foodie/Twitter connoisseur Chrissy Teigen, who frequently called out the president on Twitter, only to be blocked by him. Those actions were deemed unconstitutional last week, with a federal judge ruling that they violate First Amendment rights, considering the fact that Trump is operating from an official government account.

What’s conspiring here puts America in a different, yet still dangerous, position compared with other countries that fight for free press—a position that calls into question if the government can uphold democratic practices and, ultimately, the First Amendment. As of right now, it appears that it cannot. As such, the democratic ideal of America’s free press is hanging on by a thread.

This explosive debate has only been inflamed by key occasions over the past 12 months (blockings of civilians on Twitter included) that have left journalists dumbfounded, yet more inclined to ensure that their stories are truthful, reliable and, ultimately, told.

Here are three examples from the past year when Trump and his camp have staged assaults on press freedom, what journalists have done to rise above it and how all parties can preserve the free press going forward.

Shortly after Trump took office, his no- ex-press secretary barred notable news outlets from briefings. Conservative outlets were shown favoritism over ones that took a more critical view of his policies. Leaving the public out of these meetings—which cover key current events and business happenings at home and abroad—by banning outlets read by many hinders citizens’ decision-making skills.

Punishment for putting pen to paper is the beginning of a dangerous rhetoric against those who are tasked with supplying the public with crucial educational information and news that can impact society’s well-being.

Yet, the White House’s politically incorrect behavior has been the catalyst to reporters becoming more inclined to go the extra mile to get the scoop and hold Trump accountable for his actions.

Case in point: There has been over a year-long hunt to retrieve The Apprentice outtake tapes that have been rumored to show the president making racist, provocative comments. This same drive resulted in Trump’s alleged charitable donations being investigated. All efforts question whether or not he is fit for office and, ultimately, presidential.

To create a more transparent government, press and lawmakers must not just keep the open White House policy intact, but provide greater access to government data and introduce more user-friendly government websites. Politicians also must be held accountable to practice transparency once in office (on and off Twitter).

Trump is likely one of the main reasons why fake news was named the word of the year. His frequent suggestions that journalists are untrustworthy—what can be assumed is a defense mechanism to discredit those who criticize his policies in order to rally supporters—has caused civilians to question the reliability of news outlets and has been used to his benefit to position himself as an authority on the matter.

These incessant—and, many times, false—claims created a “them” versus “us” environment between the White House and the press, as well as press and society. Even the publishing and advertising ecosystem took a hit, as brands are now timid over placing ads on news sites in an attempt to not be associated with fake news in any way shape or form.

But the volatile environment has been handled swiftly and creatively by news outlets, journalists and platforms alike.

In the midst of it all, The New York Times tightened its policies around anonymous sources to provide readers with more information. Google went as far as launching its own News Initiative to help journalists thrive in the digital age. And news outlets like HuffPost began leaning on interactive storytelling tools to capture skeptical readers with fleeting attention spans, incorporating engaging elements into articles on topics including the president’s relationship with North Korea and his response to white supremacist violence.

This comes as no surprise. Our data at Playbuzz shows that interactive content garners an average dwell time of two minutes and 15 seconds (compared with the eight-second industry average), and that if you blend a news story with an interactive storytelling element, the time people spend on that story jumps by 20 percent.

Although spending more time on an article won’t verify or counter the content of it, it enables readers to engage with it, judge the content of it and, thus, enhance their ability to evaluate the information presented to them. This is of course in comparison to skimming a headline passively, which makes readers more susceptible to half-truths. More engagement could, therefore, lead to a safer news environment and reduce the spread of misinformation that Trump himself is disseminating.

Although President Trump has ushered in a more casual way for a world leader to frequently communicate with a wide audience—via Twitter—it has been done so at times carelessly with him almost using the platform as a weapon. His bombastic rhetoric and seemingly knee-jerk reactive statements frequently garner unsympathetic headlines, as playing the big guy on the playground doesn’t sit well with most journalists.

Using the social platform to call journalists dishonest and “the enemy of the American people” appears to have been done sans consideration for long-term repercussions. Those include influence on younger generations’ trust in reporting and America’s overall reputation as a democratic country. It could also be one of the reasons why 43 percent of Americans have a very or somewhat unfavorable view of the press.

But reporters quickly went from baffled to fighting back, with CNN asserting that Trump’s tweets endanger journalists in countries hostile to free press. The outlet, and others, have also used Twitter to directly respond to the president and uphold that facts come first.

As their reputations have been questioned, the press has grown stronger in forming what I would say is an environment of comradery to stand up for the right to report the news not just at their organizations, but globally.

The secrecy permeating from Trump’s camp—including refusal to hand over his tax returns, unlike presidents before him—has been the catalyst to an era of uncertainty for civilians who are questioning their country’s leadership and, on a more micro level, for journalists who aim to tell truthful and trustworthy stories on a daily basis. This includes a celebrity like Teigen, who uses her social following as a platform to air her views.

In honor of this month’s World Press Freedom Day and in lieu of last week’s ruling, we must demand higher standards of transparency—from the White House to the newsroom—in order to work together and end the fake news narrative that has helped incite distrust and snowballed into a war against the truth.

Although Trump’s campaign against the media—and likely Teigen—is far from over, his attempt to silence journalists will continue to be fought with creativity, technology and the earnest to tell great stories.