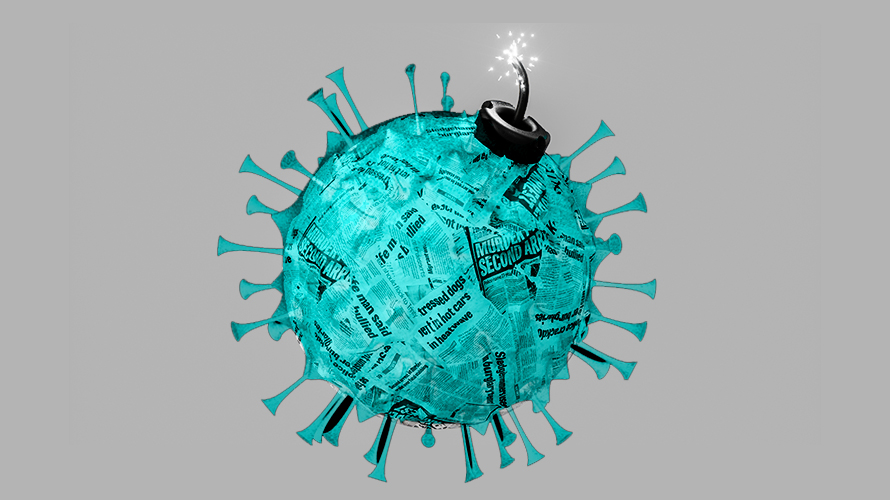 Thousands of journalists have lost their jobs in recent years, with the biggest blows dealt at the local level. As other businesses recovered after the 2008 financial crisis, they took their digital ad dollars to Facebook and Google instead of publishers’ websites and news pages. Local news organizations still haven’t found their footing.

Now, news organizations, as all industries, face a new economic threat. But this time, local publishers are without the last leg they had to stand on in advertising dollars from local businesses now forced close to stop the spread of coronavirus.

Gannett, among the largest local newspaper owners in the country, announced today that it would not pay workers making more than $38,000 for one week per month through June; The Tampa Bay Times is reducing its print schedule to two days per week while its newsroom continues to aggressively cover the virus; and alt-weekly owners with publications in multiple cities, like Euclid Media Group, have had to lay off huge chunks of their staff.

“The industry was in a weak financial position before COVID-19,” said News Media Alliance president and CEO David Chavern. And then whole advertising categories—like travel, local restaurants and local theater “completely disappeared,” he added. “This is not advertising that necessarily national publishers get. It’s what still sustains local news publishing.”

This is now the fourth week of the coronavirus squeezing the U.S., and publications at the local level—alt-weeklies and newspapers—are starting to feel it. These are the business models on the front lines of tragedy.

“This was a natural disaster to the economy, but nobody knows when the recovery will start. I can't think of any analogy like that.”
News Media Alliance President & CEO David Chavern
Overall employment in U.S. newsrooms decreased by about 25% between 2008 and 2018, according to Pew Research. Local newspapers saw the greatest decline in that period with a 47% decrease in jobs.

“Before this public health crisis, most local news organizations were struggling with the massive disruption to their business models resulting from digital transformation. Now, a number of these local news organizations—both legacy ones and digital startups alike—are in even greater peril, with advertising and events revenue plummeting because of the coronavirus crisis,” said Tim Franklin, senior associate dean and professor at Northwestern University Medill School of Journalism, Media, Integrated Marketing Communications.

This crisis has led to a surge in traffic to many publishers’ websites, but without a real pathway to monetize that traffic.

Despite this, some local news organizations like The Seattle Times, The Tampa Bay Times, The Philadelphia Inquirer and The Chicago Tribune are seeing an uptick in digital subscriptions, according to an analysis by the Local News Initiative, an effort to “reinvent the relationship between news organizations and audiences” led by Franklin at the university.

But bumps in digital subscribers, Chavern said, are not making up for the losses in ad revenue, which local publishers are forecasting to decrease by 30% to 50% this quarter.

“We’re going to have to do two things: We need to figure out how to get our way through this COVID-19 crisis, and then we need to relook at how we rebuild a business model for the long term,” he said.

Cleveland Scene, an alt-weekly with news coverage that competes with the Advance Publications-owned publication in town, The Plain Dealer, generates 75% of its advertising from places where people gather, like music venues and restaurants.

Ohio’s aggressive move to ban large gatherings cut off the outlet’s advertising pipeline, putting a chokehold on its events business. For example, it was just days away from a brunch tasting with 30 local restaurant partners, selling more than 800 tickets, when the coronavirus swept in. Cleveland Scene had to postpone the event and give refunds to ticket holders, and has stopped printing with its newsroom now down to just three journalists, after its parent company had to (hopefully) temporarily lay off about 70% of staff among its alt-weeklies in five states.

“It was terrible. It was one of the worst days I’ve had, just awful to have to do that,” said Andrew Zelman, CEO of Euclid Media Group. “There was no fault of anybody in the industry that this happened, but we were at that point trying to figure out a path forward, and that was the only option we had. Something beyond our control happened, and we had to make these changes almost immediately.”

For now, Zelman hopes to bring those staffers back when the market returns to normal.

In a note to Gannett employees, CEO Paul Bascobert acknowledged that he expected revenue to “decline significantly,” with direct-sold advertising “already slowed” as “many businesses have paused their scheduled marketing campaigns.” At the media company, execs will take a 25% pay cut, while Bascobert won’t take his salary at all. His base salary was reportedly $725,000 last year.

“This is our plan for the future, and despite the challenges of today we must stay committed to creating an efficient operating structure,” Bascobert wrote. “So yes, as I have said to you all in the past, that means we will see some permanent reductions during this period.”

In the meantime, local publishers, as all media organizations, are left to plot out a pathway to sustainability—a difficult task already—without an actual timeline for when the economy can reopen.

That’s also assuming news outlets will be able to keep their doors open as the storm continues to rage. For now, Chavern, who is constantly talking with publishers, said he is doing his best to make sure the number of local media organizations that shutter is “as small as possible.”