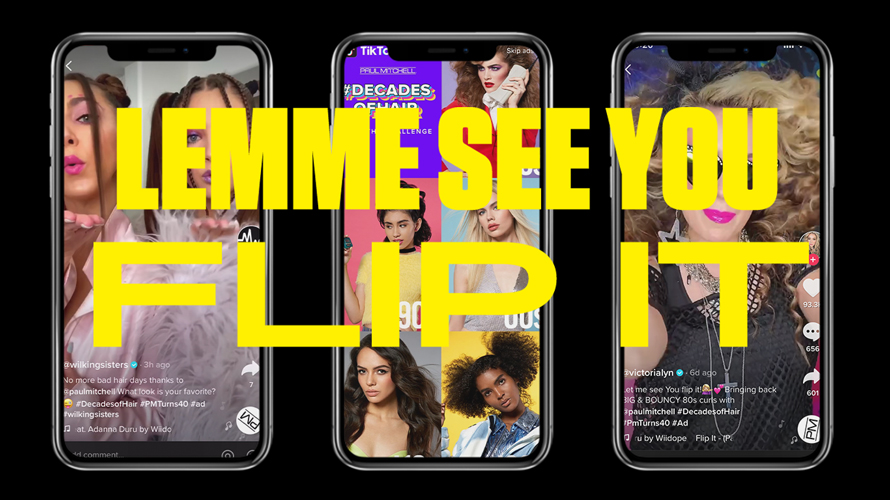 Despite the 15 seconds TikTok requires its users to keep to, a number of brands have developed their own jingles on the platform to widespread success.

E.l.f. Cosmetics created a TikTok challenge last October based on an original song called “Eyes.Lips.Face.” The brand not only made history on TikTok, but the full-length version of the song took off on streaming service Spotify.

Partly inspired by that campaign’s success, hair care brand Paul Mitchell created an original track called “Flip It,” which anchored a TikTok challenge of its own to mark Paul Mitchell’s 40th anniversary in March.

The creative studio behind those campaigns, Movers+Shakers, has rolled out similar marketing efforts with other brands including dating application Match and Warner Animation Group’s recent movie release, Scoob!.

The masterminds of those efforts have, in part, theater to thank.

Incorporating original music into campaigns was “an opportunity for brands looking to do something different and fresh and stand out,” Horowitz said.

Movers+Shakers began adding its touch to campaigns on Facebook, Instagram and YouTube, scoring its first big hit with three-minute musical film Match the Musical, which he described as a combination of “Summer Nights” from Grease and La La Land.

Match/Movers+Shakers
The success of its jingle for e.l.f came down to a chance meeting.

Former Stanford University classmates Gayitri Budhraja, vice president of brand for e.l.f., and Horowitz running into each other at a college reunion was the catalyst for “Eyes.Lips.Face,” which is what e.l.f. stands for.

The stunt accelerated the makeup company’s presence on TikTok, where its hashtag already had 3.5 million views, according to e.l.f. chief marketing officer Kory Marchisotto.

The brand had only been using a “toe in the water” approach with paid media, and “a lot of people knew e.l.f. but didn’t know what it stood for. We wanted to invite everybody to share their eyes, lips and face in a way that was most authentic to them,” Marchisotto said.

It was a first for e.l.f. and TikTok—neither had created a custom jingle. “E.l.f. loves being first to market with new different marketing approaches,” Horowitz said.

So, on Oct. 4, e.l.f. kicked off a six-day hashtag challenge on TikTok with “Eyes.Lips.Face” by Grammy Award-winning songwriter Ill Wayno and Holla FyeSixWun.

The effects lasted longer than six days. It became the most viral campaign ever on TikTok and the fastest ever to reach 1 billion views, spurring nearly 5 million user-generated videos, with celebrities including Ellen DeGeneres, Lizzo and Reese Witherspoon joining the fray organically.

The full track was released as a video via Vevo following a partnership with Republic Records, and the song reached No. 4 on Spotify’s global viral charts, getting added to some 300,000 playlists on the platform.

e.l.f. Cosmetics/Movers+Shakers
Marchisotto called the campaign’s success “catching lightning in a bottle thrice,” referring to its success on TikTok and YouTube, followed by the artists behind the track signing deals with Republic Records.

“We wanted to create an original piece of music that was an invitation to self-expression,” she said. “The idea of creating original music has become a key component of so many launches. How can we have the greatest impact in the smallest amount of time?”

Horowitz said the 15-second timeline is mapped to creative strategy and brand strategy, and the studio and the brand work with the songwriting team “so that we know what we’re trying to do with each second of music.”

“It’s a skill to translate a brand’s personality into music,” he added.

Brands typically invest “five figures,” in music, which covers everything from brand strategy to talent recording and usage and rights fees. A generic track, comparatively, can be licensed for four figures, and the price tag jumps to six figures for a hit song.

The cost didn’t frighten Paul Mitchell away. Influencer marketing manager Jasmine Duarte said, “Not a ton of hair brands have been around for 40 years,” and the company wanted to mark that anniversary with a collaborative effort themed around decades of hair.

Duarte said Gen Z tends to be responsive to content influenced by the 1990s and early 2000s, adding, “The decades theme felt very natural. Transformative videos and transition videos do really well on TikTok. We knew the music and audio would be a big, huge part.”

The result was “Flip It,” which debuted March 31 and has tallied roughly 8 billion views and 2 million user-generated videos. Creators wanted it to “sound native on TikTok,” Duarte said.

“With TikTok, you’re forced to listen to things with sound, unlike other platforms where people watch videos with the audio off,” Duarte said. “I had been in the social media and influencer space for 10 years, and I never had to create anything original like that.”