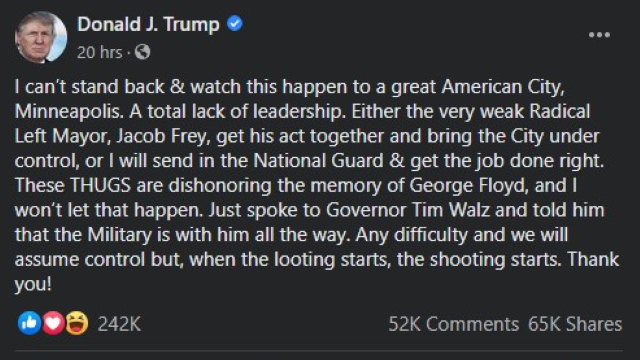 While one social network took a stand against potentially misleading information and statements glorifying violence posted by President Donald Trump, another held firm to its policy of inaction, despite pressure from both inside and outside of the company.

The first social network is Twitter, which labeled two tweets by Trump Tuesday regarding mail-in ballots with links to additional information from trusted sources, causing the angered president to sign an executive order Thursday in a legally flawed attempt to limit protections for social networks that are part of Section 230 of the 1996 Communications Decency Act.

Undaunted, Twitter affixed a label to Trump’s tweet early Friday morning regarding protests, rioting in looting in Minneapolis in response to the death of George Floyd during an arrest, saying that the tweet violated the platform’s rules against glorifying violence—“when the looting starts, the shooting starts”—but would remain accessible because it was in the public interest.

The second social network is Facebook, which has been under pressure for some time already for its reluctance to take action against Trump and others.

The pressure began to build from inside the company, as well, as internal posts leaked to Casey Newton of The Verge Friday showed.

Newton reported that vice president of content policy Monika Bickert wrote on Workplace, the company’s internal version of Facebook, that the Facebook version of Trump’s post on mail-in ballots did not violate the social network’s rules against voter interference because it did not mislead people about registering to vote or voting.

Bickert toed what has become the company line, writing, as reported by Newton, “We do not believe that a private technology company like Facebook should be in the business of vetting what politicians say in the context of a political debate. As is the case with the president’s tweets, speech from candidates and elected officials is highly scrutinized and debated. We think people should be allowed to hear what politicians say, make up their own minds and hold politicians to account.”

Employee comments following Trump’s Friday morning posts about Minneapolis, from the content leaked to Newton, include:

“I have to say I am finding the contortions we have to go through incredibly hard to stomach. All this points to a very high risk of a violent escalation and civil unrest in November and if we fail the test case here, history will not judge us kindly.”

“It’s egregious that nobody from policy has chimed in or provided any sort of context here. They’ve already made an official decision by keeping the post up after it’s been reported. They should communicate their justification for the decision.”

“Makes me sad and frankly ashamed. Hopefully this wasn’t the final assessment? Hopefully there is still someone somewhere discussing how and why this is clearly advocating for violence?”

“It’s been said previously that inciting violence would cause a post to be removed. I too would like to know why the goals shifted, and where they are now.”

Newton also said one employee shared a GIF of a comedy sketch by Mitchell and Webb, in which an SS officer asks his counterpart during World War II, “Are we the baddies?”

That employee wrote, “Waking up every morning at FB now and having this run through my head, immediately followed by ‘Yes, apparently.’” And a comment from a co-worker read, “It’s honestly really hard for me to take seriously the words of support from our leadership this morning if we allow content like this on our platform. Whatever we are getting from not acting on this, is it worth allowing clear, violent threats against Black protesters?”

Facebook CEO Mark Zuckerberg finally responded late Friday, in the time slot the company normally reserves for breaking news that is not likely to be well-received.

In a lengthy Facebook post, he said he had been struggling with his response all day, adding, “Personally, I have a visceral negative reaction to this kind of divisive and inflammatory rhetoric.”

However, he indicated that no action against Trump’s posts was forthcoming, explaining, “We looked very closely at the post that discussed the protests in Minnesota to evaluate whether it violated our policies. Although the post had a troubling historical reference, we decided to leave it up because the National Guard references meant we read it as a warning about state action, and we think people need to know if the government is planning to deploy force. Our policy around incitement of violence allows discussion around state use of force, although I think today’s situation raises important questions about what potential limits of that discussion should be.”

Zuckerberg also referenced a post from Trump later Friday, claiming that he meant to imply that looting could lead to violence, and not to encourage violence.

The inevitable comparison to Twitter was addressed, with Zuckerberg writing, “Unlike Twitter, we do not have a policy of putting a warning in front of posts that may incite violence because we believe that if a post incites violence, it should be removed regardless of whether it is newsworthy, even if it comes from a politician. We have been in touch with the White House today to explain these policies, as well.”

He concluded, “There are heated debates about how we apply our policies during moments like this. I know people are frustrated when we take a long time to make these decisions. These are difficult decisions and, just like today, the content we leave up I often find deeply offensive. We try to think through all the consequences, and we keep our policies under constant review because the context is always evolving. People can agree or disagree on where we should draw the line, but I hope they understand our overall philosophy is that it is better to have this discussion out in the open, especially when the stakes are so high. I disagree strongly with how the president spoke about this, but I believe people should be able to see this for themselves, because ultimately, accountability for those in positions of power can only happen when their speech is scrutinized out in the open.”