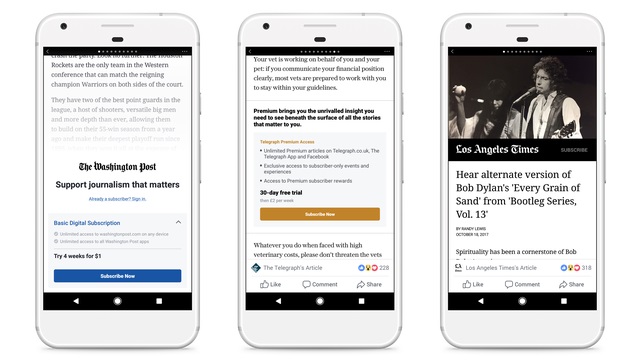 The idea of subscriptions in Facebook’s Instant Articles has been bandied about for quite some time, and an official test is finally underway.

Head of news partnerships Campbell Brown, head of news product Alex Hardiman and product manager Sameera Salari announced in a Facebook Media blog post that the social network is teaming up with 10 alpha partners in the U.S. and Europe to test news subscription models in Instant Articles, starting out on Android.

According to Peter Kafka of Recode, iOS is not part of the test because Apple is seeking up to 30 percent of any revenue generated via Instant Articles, as Apple considers these transactions to be in-application purchases, while Facebook has earmarked 100 percent of the revenue for publishers.

The alpha partners are:

Brown, Hardiman and Salari outlined how the test will work:

Facebook will also test other ways to help publishers drive subscriptions, including a Subscribe call to action in Instant Articles—similar to existing CTAs such as Email Sign Up and App Install—and a subscribe button in place of the like button in the top-right-hand corners of articles.

Brown, Hardiman and Salari said average revenue per page view on ads in Instant Articles has risen more than 50 percent in 2017, and publishers are receiving more than $1 million per day from Instant Articles via Facebook Audience Network.

They added in the blog post, “Earlier this year, many publishers identified subscriptions as a top priority, so we worked with a diverse group of partners to design, refine and develop a test suited for a variety of premium news models. We also heard from publishers that maintaining control over pricing, offers, subscriber relationships and 100 percent of the revenue are critical to their businesses, and this test is designed to do that.”