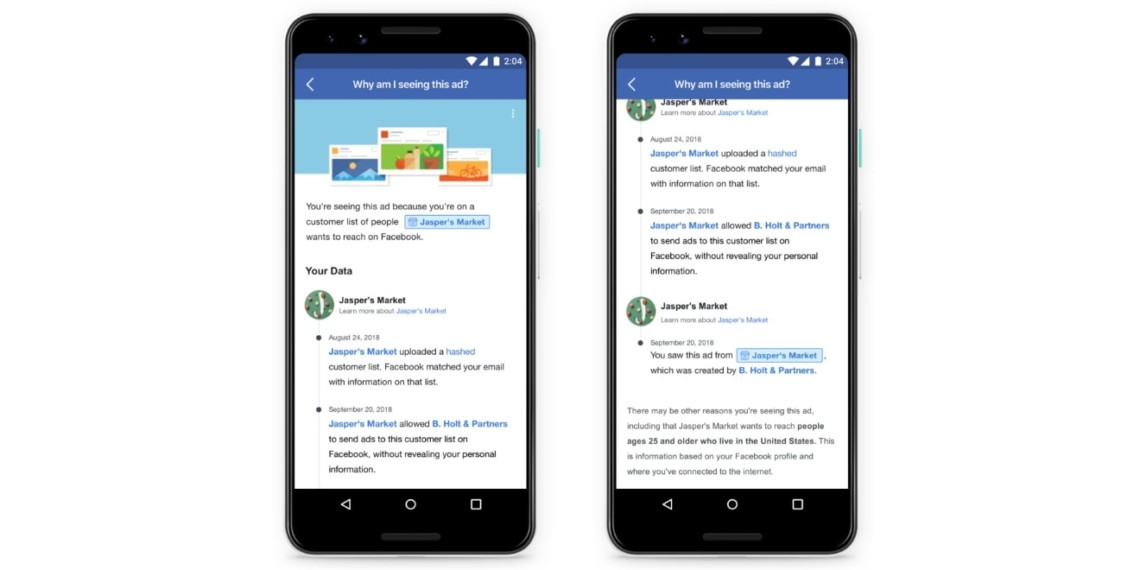 Facebook's 'Why am I seeing this ad?' tool - Credit by Facebook

Leathern shared a series of tweets about the change, which will begin rolling out later this month.

A promised thread for adtech nerds. Since we announced an important product change last week that applies to all ads (not just a subset), for ‘Custom Audiences from a list’. I wanted to give some more details. These changes start to roll out later this month (1/17)

He said that when Facebook updated its “Why am I seeing this ad?” and Ad Preferences tools in July, he told Katie Notopoulos of BuzzFeed News in an interview that the tools were still “somewhat difficult to navigate and not as comprehensive as (people would) like.”

Leathern said this month’s update will make it easier for Facebook to show its users the relationships between agencies, marketing partners and advertisers, adding, “Many small and medium businesses do their own marketing, whereas some big companies have their own marketing affiliates and multiple agencies.”

He previewed the new control screen for businesses that people will have access to, saying in his tweets, “You can control the use of lists at a business level. You could disallow the use of lists by multiple advertisers at one time, if they are using lists uploaded by the same business account. You can choose whether an advertiser can include or exclude you from their target audience at a business account level. That means any advertiser using any list from that business will also not be able to include, or exclude, you in an audience. Or you could make yourself eligible for seeing the ad, if they are using a list to exclude you. In this example, a gym might exclude you from ads to sign up because you’re already a member.”

Facebook
Leathern elaborated on the include/exclude split, saying that advertisers use it for testing purposes, and offering as an example a streaming service that a person is already signed up for not showing them sign-up ads, but showing them ads for specific new shows.

People who are not sure why they were included on a list in the first place will still have to contact the business that created the list, as Leathern said Facebook has no visibility into the makeup of these lists, and all information is hashed before being sent to the social network.

When the update is rolled out, users will be able to access it via Advertisers & Businesses in their Ad Preferences.

Leathern concluded his tweetstorm with, “I’m excited about the new transparency that people will get about how marketers are trying to reach them and the granular ability to make changes to that picture. Once it rolls out later this month, I would love feedback on how we continue to improve it.”