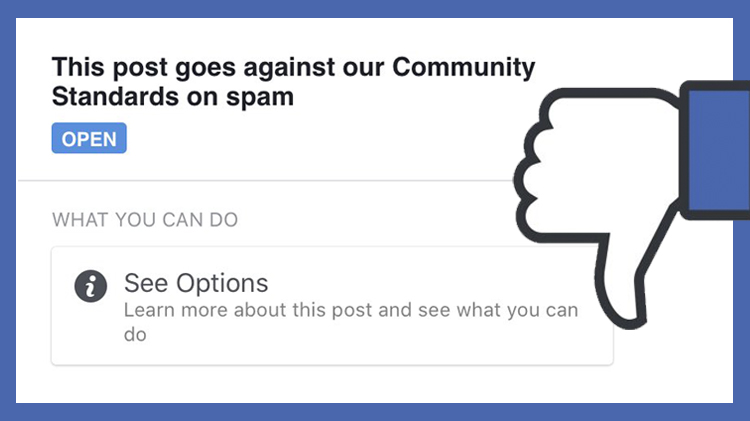 If you're a Facebook user and saw this message Tuesday night, you are not alone. - Credit by Facebook

Facebook blamed a glitch in its automated systems that filter out spam for a host of complaints Tuesday night about posts on topics including the coronavirus being removed despite not violating its terms of service.

Users of the social network turned to Facebook and Twitter to complain about the erroneous removals of posts, many of which referenced COVID-19 or contained links to legitimate news sources.

In one example, Jodi Rudoren, editor in chief of The Forward, a media company geared toward Jews in America, said in a tweet that its content was removed from its own pages, individuals’ pages and organic shares “just as news was breaking of coronavirus in Hasidic neighborhoods in Brooklyn.”

All of @jdforward content has been taken down from @Facebook -- from our institutional pages, from individual pages/organic shares -- just as news breaking of #coronavirus in Hasidic neighborhoods in Brooklyn. People got messages saying we "violated community standards" 1/2

She tweeted shortly afterward that the issue appeared to be fixed.

Facebook could not provide an estimate of how many posts were affected.

The social network said earlier this week that in an effort to protect its contract workers who review content from the coronavirus pandemic, it planned to rely more on its machine learning systems, which may result in more mistakes. But this was not the case with the posts deleted Tuesday night, according to vice president of integrity Guy Rosen.

According to Rosen, the erroneous removals were caused by a bug in the social network’s anti-spam features, and were “unrelated to any changes in our content moderator workforce.”

Facebook CEO Mark Zuckerberg said during a press call Wednesday that “98% or more” of spam is taken down from Facebook by artificial intelligence systems. About Tuesday night’s issues, he said, “This was just a technical error. We’re still doing the postmortem on what happened.”

Rosen added in a later tweet that all “incorrectly removed” posts have been restored, “which included posts on all topics—not just those related to COVID-19. This was an issue with an automated system that removes links to abusive websites but incorrectly removed a lot of other posts, too.”

We’ve restored all the posts that were incorrectly removed, which included posts on all topics - not just those related to COVID-19. This was an issue with an automated system that removes links to abusive websites, but incorrectly removed a lot of other posts too.

Several replies to Rosen’s second tweet indicated that people were still having issues, but a Facebook spokesperson said Wednesday that all posts affected by the issue had been restored, adding that while users logging in may see notifications alerting them that their content was removed, they should be able to see that content on the platform.
david.cohen@adweek.com David Cohen is editor of Adweek's Social Pro Daily.