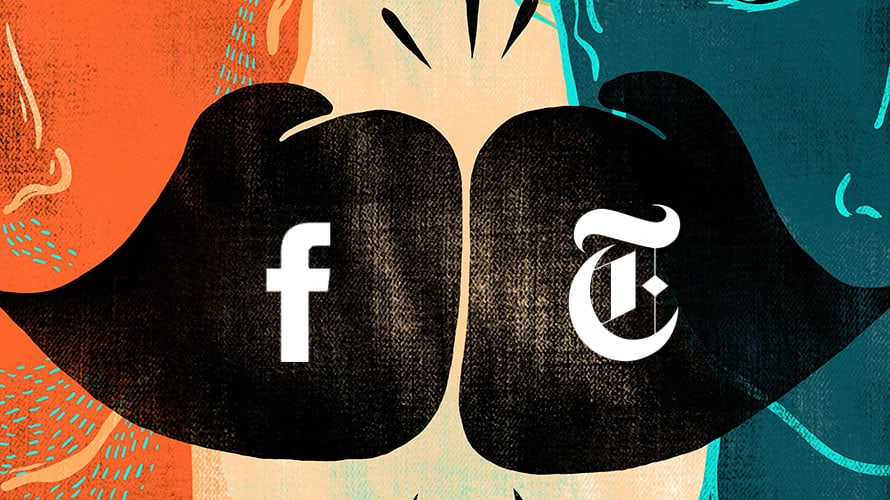 Facebook's new policy regarding political ads played out in a heated discussion between execs from the New York Times and the social media platform. - Credit by Photo Illustration: Yuliya Kim; Sources: Getty Images

Campbell Brown, head of global news partnerships at Facebook, said publishers have “welcomed” the company’s approach to including them in their political ads policy.

Brown and Thompson were discussing the findings in the 2018 Reuters Institute Digital News Report during an event at Columbia Journalism School today. With Brown and Thompson sitting just inches apart, even sharing the same microphone, the conversation turned into a verbal boxing match. Thompson said he’d love to meet even one publisher who is happy with Facebook’s new policy.

A group of seven media organizations representing more than 20,000 media publishers and professionals have already pushed back and called on Facebook to exempt news organizations from the policy, which requires that all ads that run on Facebook and Instagram in the U.S. that are election-related, or about political issues, must be clearly labeled, including noting who paid for them.

The ads will be placed in an archive where specific information about the ad, including how many impressions it got, how much money was spent, and specifics about the ad’s audience, are broken down.

Publishers fundamentally object to the idea of blurring the lines of reporting on politics with politics itself, Thompson said, adding that it was, “completely clear that the enemies of high quality journalism want to blur the line.”

“This is not about Facebook’s intentionality. Unintentionally, I’m afraid Facebook is supporting the enemies of high quality journalism,” Thompson said.

Brown replied by saying there was a “fundamental misunderstanding” of the policy and that this was the first time journalists were arguing against transparency.

“We’re asking you to be transparent about all the content being boosted on the platform,” Brown said, questioning whether Thompson’s views were because The New York Times doesn’t want people to know how much it spends on marketing.

To illustrate his point, Thompson brought receipts. He put up a picture of a post that promoted a cooking recipe, a “dangerous, political” message that called for nuts.

“Frankly, Facebook may contain nuts,” Thompson said, before noting that after The Times pointed out the mistake to Facebook, it was fixed. He shared another example of an article about President Trump that was flagged by Facebook.

Rooting out bad content around political issues is at the heart of the new policy because of the events during the last presidential election, Brown said.

“We have a mid-term coming up, you know what happened on our platform during the last election,” she said, later adding, “I don’t see what’s wrong with saying the New York Times paid for a boost for a post about Donald Trump.”

Thompson sat for most of the panel with his arms crossed while Brown leaned so far away from him that it was almost surprising she didn’t fall out of her chair. As was noted multiple times throughout the discussion, all of this went down on Brown’s 50th birthday.

“We want to have an informed community,” Brown said. “That means having high quality news on the platform.”