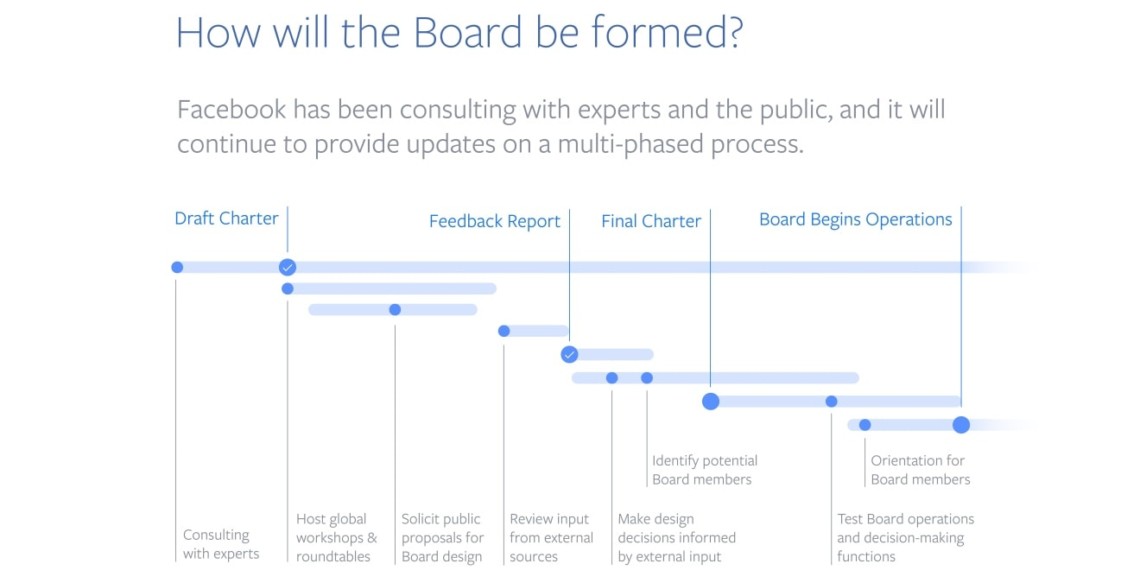 A look at the long process to date Facebook

Facebook provided an update on the independent oversight board to help with decisions on which content should be removed for violating its community standards, which was initially proposed by CEO Mark Zuckerberg last November and described in more detail in January.

In response to backlash last November over Facebook’s work with Definers Public Affairs, a Republican opposition research firm that conducted work on the company’s behalf, Zuckerberg said the social network would establish an independent body that would review content decisions it made.

In January, vice president of global affairs and communications Nick Clegg introduced the draft charter for the oversight board, which included several key questions that needed to be addressed in the process of forming the group.

As part of the process, Facebook began seeking input from the public in April.

Director of governance and global affairs Brent Harris said in a Newsroom post Thursday that since the draft charter release in January, Facebook has hosted six workshops and 22 roundtables, which were attended by more than 650 people from 80 countries, and the company had personal discussions with over 250 people and received more than 1,200 submissions from the public.

Harris shared a report and appendices (embedded below) containing all of the feedback and recommendations it received, and he shared three general themes Facebook discovered in compiling this information.

The board must exercise independent judgment, and not be influenced by Facebook, governments or other third parties. To do this, it will need “a strong foundation for its decision-making—a set of higher-order principles.”

The process of how the board will select and hear cases, deliberate, decide and communicate those decisions to the social network must be clarified.

And diversity is essential in the composition of the board. Harris wrote, “These members should be experts who come from different backgrounds, different disciplines and different viewpoints, but who can all represent the interests of a global community.”

The next steps for Facebook include deciding who will serve on the eventual 40-person board, which will be done via sourcing, interviewing, selecting and providing training, as well as engaging consultants and executive search firms and accepting nominations.

Harris said Facebook will select the first few members, who will then help fill out the remaining seats.

Oversight Board Consultatio... by on Scribd

Oversight Board Consultation Report Appendix by David Cohen on Scribd