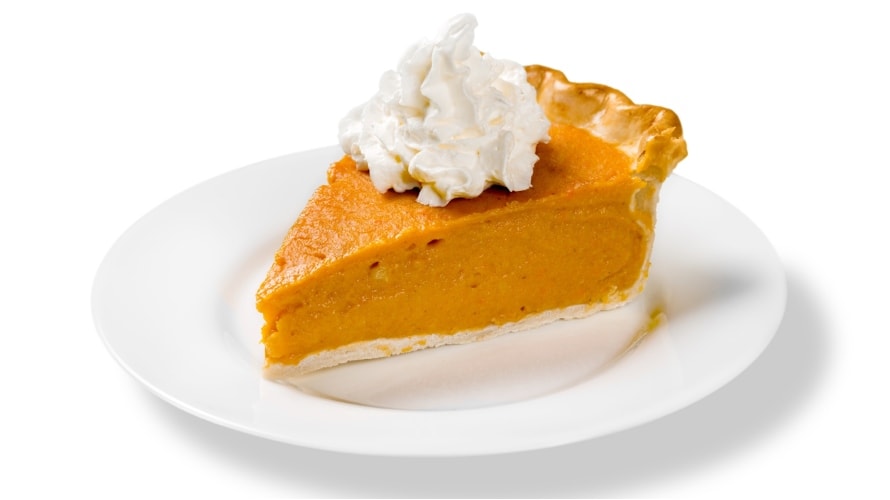 Life had no meaning for Facebook users in September, as absurdism—along with associated topics ethical egoism, nihilism, pessimism, existentialism, skepticism, surrealism, anarchism, Albert Camus, philosophy and meme—was one of Facebook IQ’s Topics to Watch for September 2018.

Conversation on those topics was up nine times compared with September 2017 and 0.8 times versus August, dominated by men 18 through 34.

Facebook IQ wrote, “Absurdism is a philosophy that stresses the idea that life is fundamentally meaningless, but people still continue to search for meaning and purpose in spite of this. While this philosophy may seem dark, it’s actually commonly incorporated into humor, especially among millennials. People are even forming online communities around absurdist memes. And this philosophy is increasingly appearing in everything from TV shows to movies and games. Ironically, absurdist content brings people together—allowing them to form meaningful connections over meaningless content.” 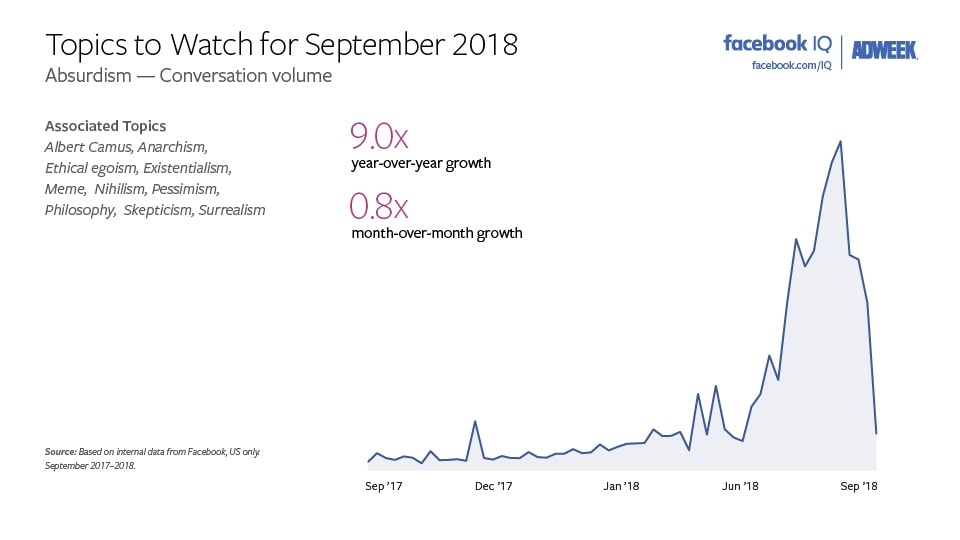 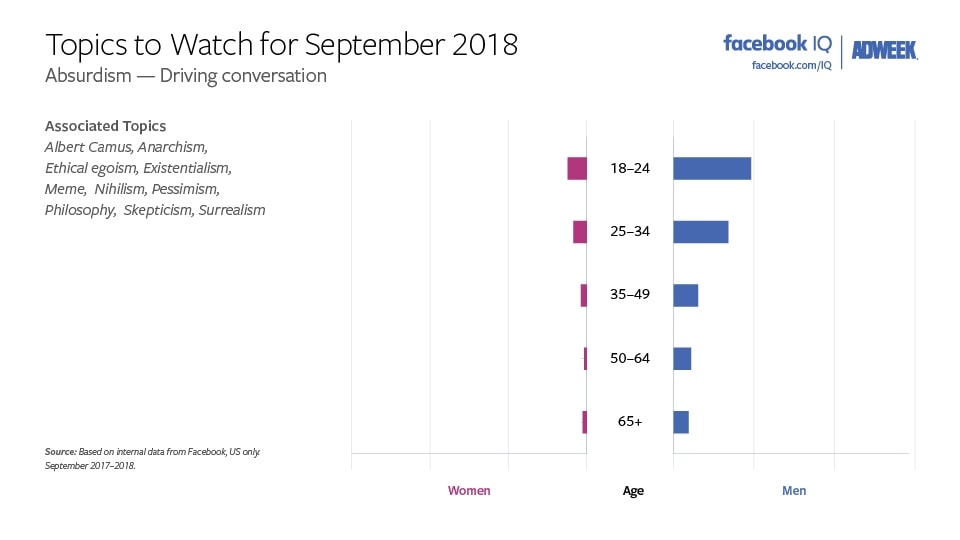 The social network’s research arm wrote, “A common house plant, Monstera deliciosa is often referred to as the Swiss cheese plant due to the holes in its large, green leaves. It’s been growing in popularity not just as a house plant, but as a design element. Clothing brands are choosing these distinctive leaves over palm leaves in their prints. Monsteras are also appearing in artwork, jewelry and home goods. And this plant even has its own hashtag on Instagram, as people post pictures of their plants—and plant-themed decorative elements—on #MonsteraMonday. Monsteras are growing everywhere—from gardening to graphic design.” 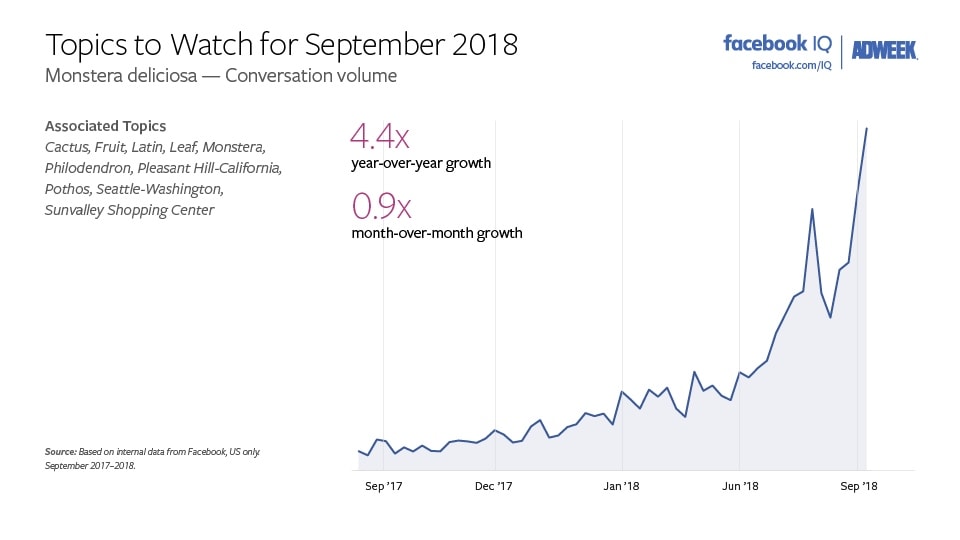 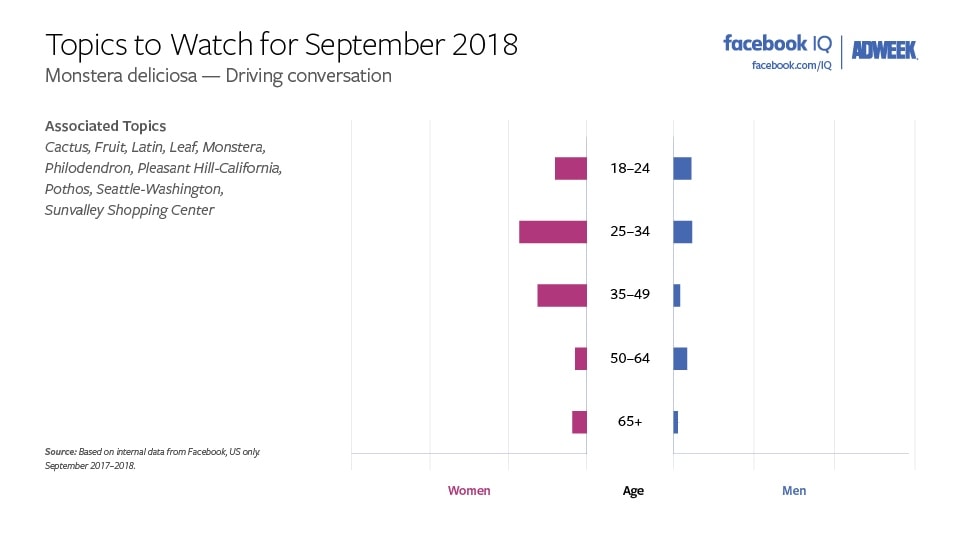 Fall is in the air, and pumpkin pie spice—along with associated and related topics chocolate chip cookies, pumpkin spice latte, latte, pie, Starbucks, cookie, coffee, butter, bread and brown sugar—saw conversation on Facebook skyrocket 70.2 times compared with last September and inch up 1.1 times from August, with women of all ages dominating the talk.

Facebook IQ wrote, “Pumpkin pie spice—a blend of cinnamon, nutmeg, ginger and cloves—has become an autumnal staple in recent years, owing much of its fame to pumpkin lattes. Now, the flavor is trending again, as people create diet-friendly lattes that amp up the spice without all of the sugar. It’s even moving from desserts to entrees, as recipes circulate for enchiladas and pot roast that incorporate this signature blend of spices. While pumpkin pie spice pops around this time each year, its uses expand each season, as people mix and match flavors and foods.” 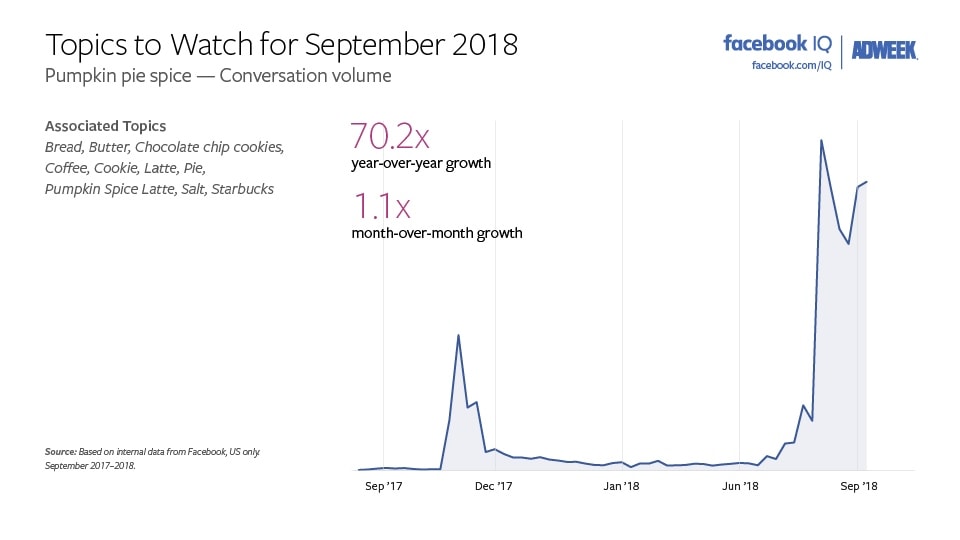 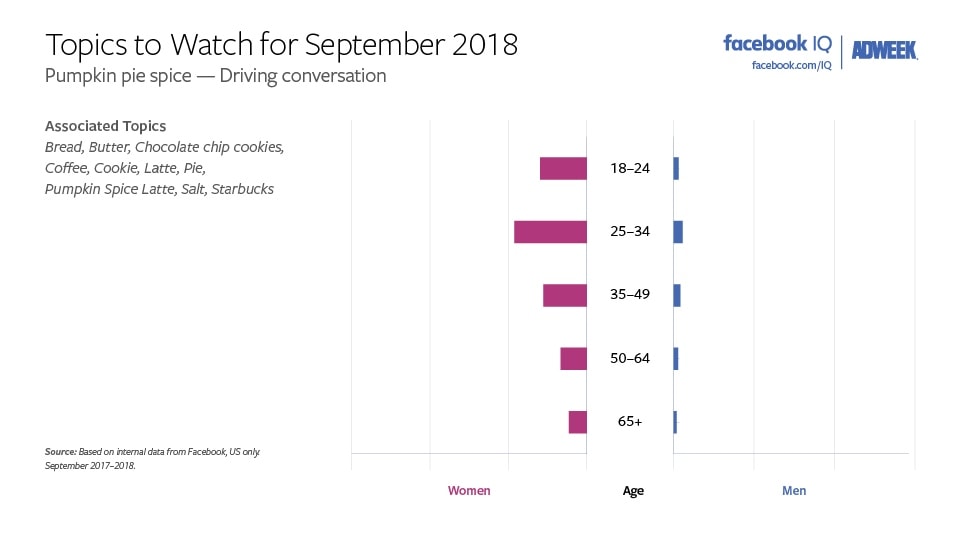 Facebook IQ wrote, “Remote cameras allow people to take photographs or videos from afar. Traditionally used by professional photographers to capture images at particularly dangerous or hard-to-access locations, they’re increasingly being used for home surveillance, as well as baby or pet monitoring. Many also have corresponding applications, which allow people to keep an eye on their homes from their mobile devices. With tracking technology, these cameras are even able to capture moving objects in a space. As people look to further connect their lives—and their homes—remote cameras and other smart devices will become increasingly ubiquitous.” 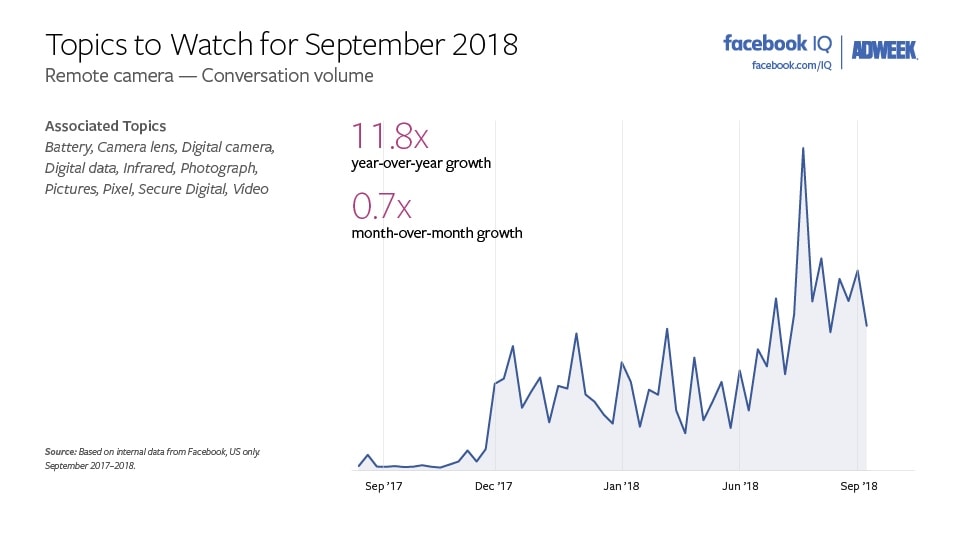 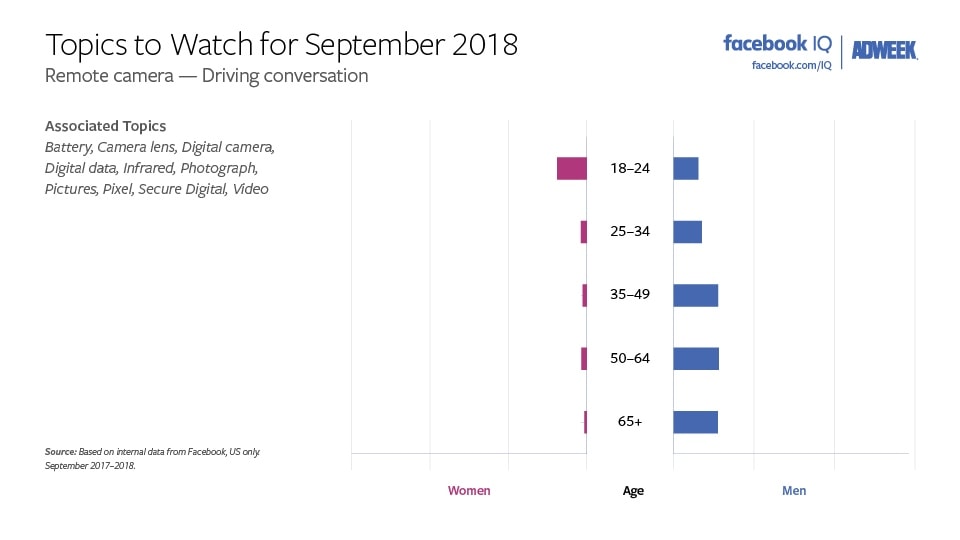 Many urban legends were shared on Facebook last month. Joined by associated topics Snopes.com, myth, folklore, internet, hoax, supernatural, paranormal, Haiti, horror film, Colorado and suspense, people 50 and older in both genders triggered a 1.1 times jump in conversation versus September 2017 and a 0.8 percent rise from August.

The social network’s research arm wrote, “People have always loved scary stories, and urban legends are modern manifestations of myths and folklore. Some have been passed down for generations, while others emerged more recently. Many are integral parts of local communities, reflecting the culture and occurrences in specific states, cities or regions. While they’re often debunked or deemed fictional, urban legends still serve to spook people and add a supernatural touch to everyday life. They now spread quickly across social media, and some even have sites and forums devoted to them. And new horror and science-fiction films are even leveraging these legends for their plots, bringing age-old fears front and center for modern audiences.” 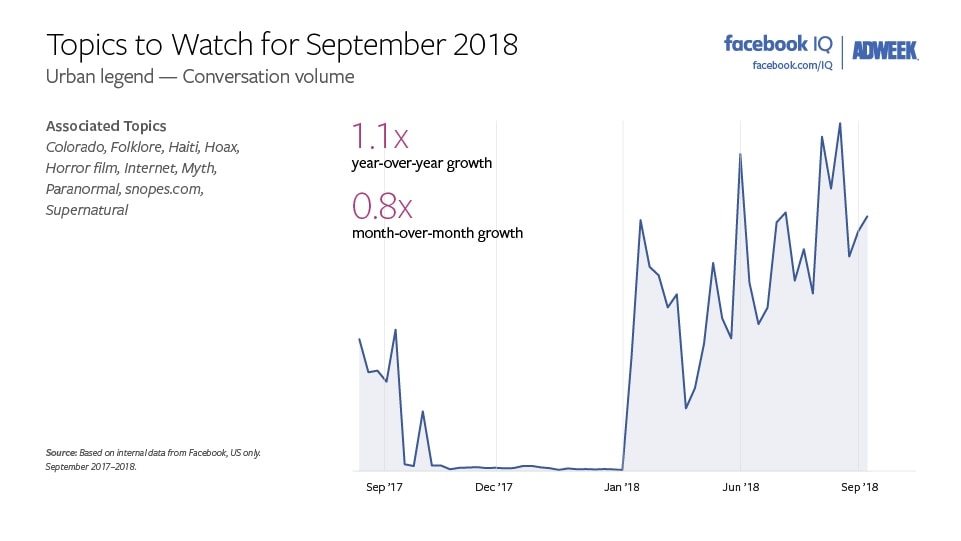 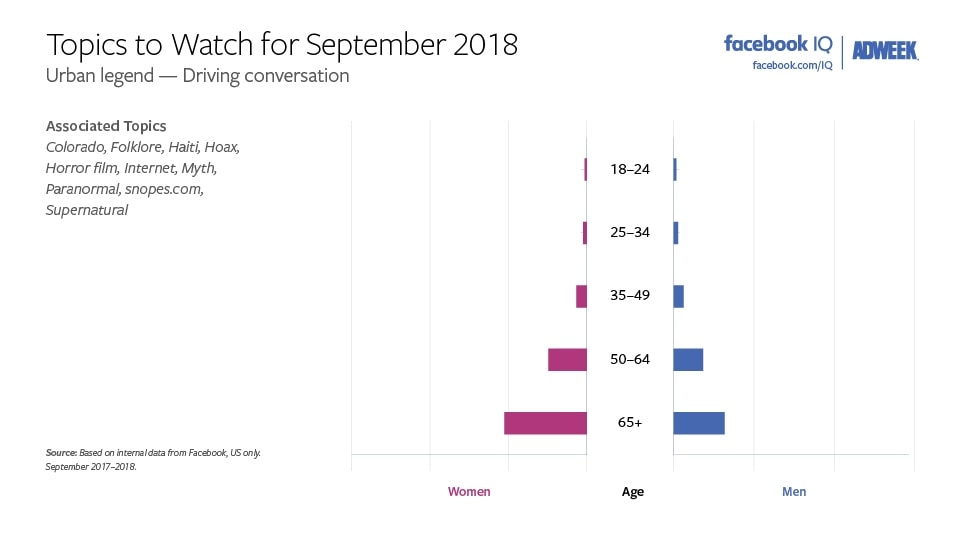 Facebook IQ wrote, “As veganism and healthy, organic eating have grown in popularity, so has vegan cheese, a general term for plant-based alternatives to dairy-based cheese. Vegan cheeses range in flavor and textures, as well as key ingredients. Some are tofu-based, while others are made from cashews or nutritional yeast. In recent years, the quality and availability have improved, as have people’s interest in exploring plant-based diets. As a response, even major food chains are exploring vegan cheese, and other vegan options, too. From pizza to pasta, vegan cheese is one of many foods becoming more easily accessible—and delectable—for all.” 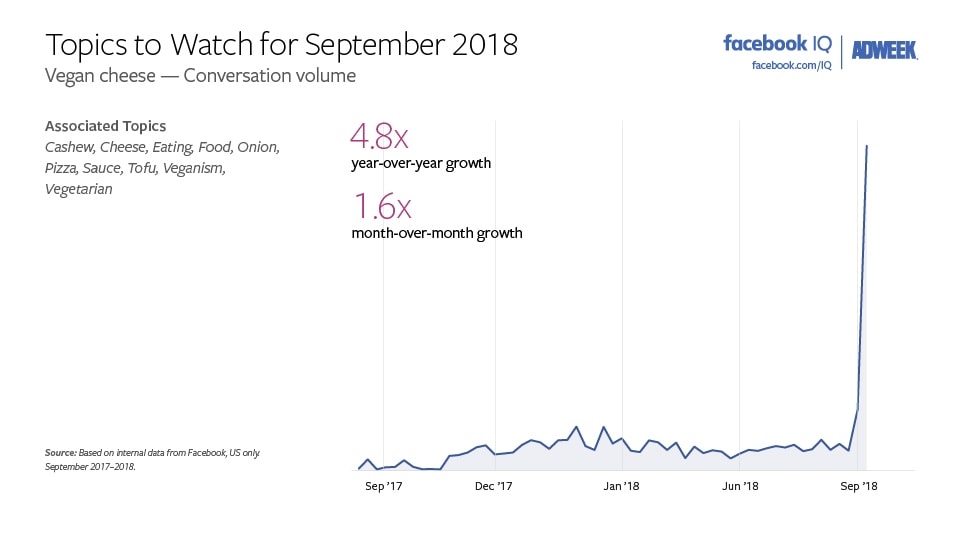 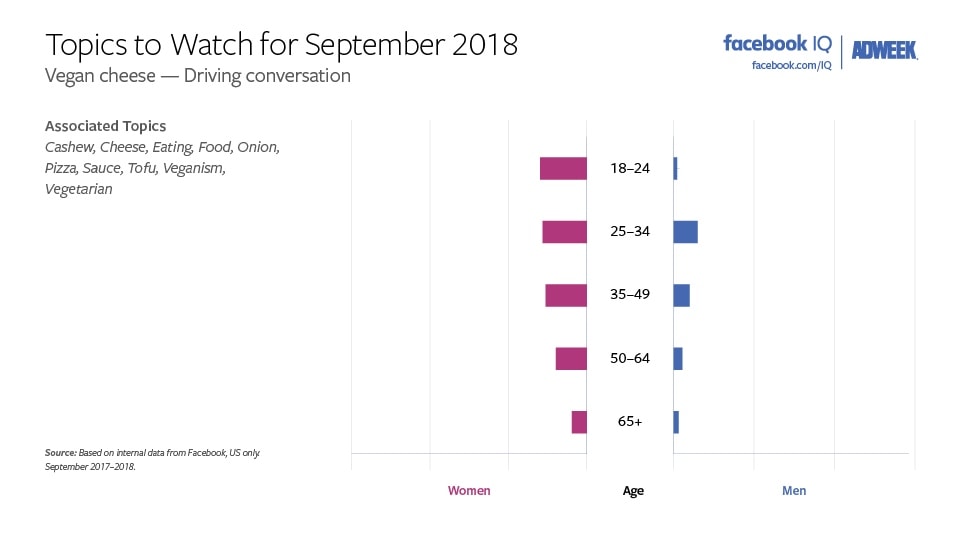