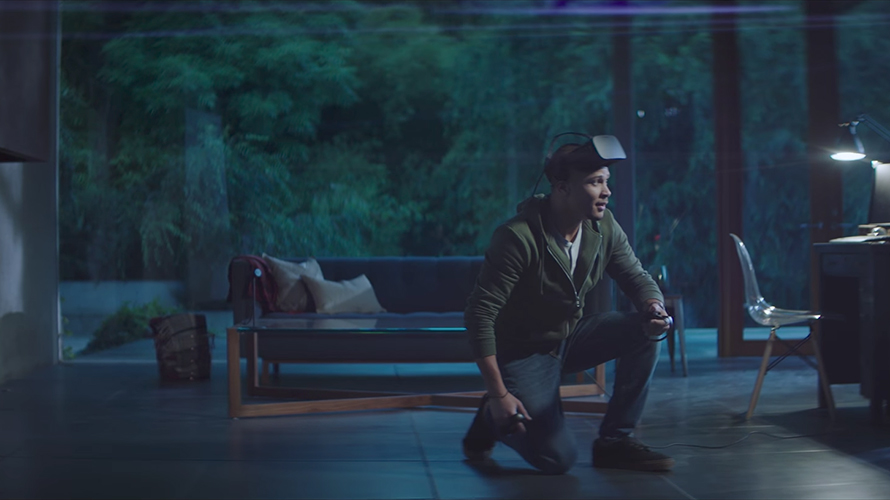 Oculus, Facebook’s VR subsidiary, has hired Space Camp as its new agency of record for Oculus Rift, launching its first global campaign to promote the VR headset. The campaign, which debuted this week, is part of a broader push by Facebook to finally make VR accessible to the average user. The two-minute spot invites people to “Step Into Rift”—a line that seems like a nod to The Matrix—while millennial men and women play action-packed video games.

According to Space Camp’s co-partners Chris Younger and Vincent Juarez, the campaign is aimed at gamers that might be on the fence about buying their first VR headset. (Los Angeles-based Space Camp is a spin-off of Ayzenberg, an agency with a background in video game promotion.)

“The campaign is really around the heart and soul of gamers and helping capture and really embrace the experiences that can be offered in VR for them,” Younger told Adweek.

Rift has been promoted in the past through smaller grassroots efforts. However, “Step Into Rift” is the first full-blown campaign by Oculus, which will be running the spots primarily in North America and Europe in English, French and German. Once the campaign has saturated the gamer market, the plan is to move onto more mainstream users—perhaps those that want to more passively watch something or who want to hang out as an avatar inside of Spaces, Facebook’s VR social network.

“We’re basically starting with a core audience and then building concentric circles around that,” Juarez said.

While the company is still primarily focused on the gamer market, it’s also hoping to get VR to a broader subset of Facebook users with a new $200 headset called Oculus Go. The headset, which ships early next year, will be the first modern VR headset that doesn’t require a powerful PC or a smartphone. That could also help pique the interest of people who want to try VR but don’t want to trade in their beloved iPhones for a Samsung Galaxy or Google Pixel.

All this is part of Facebook CEO Mark Zuckerberg’s dream of getting 1 billion people into VR in the near future. (For context, that’s half the 2 billion total users it already has on its current platform.)

Speaking on stage at Oculus Connect, Zuckerberg suggested that the “most important technologies don’t start off mainstream.” However, his talk also comes just a couple of days after a PR misstep in which Zuckerberg traveled in VR to hurricane-ravaged Puerto Rico to showcase Facebook’s Spaces platform. (Yesterday, he apologized for what many people saw as a tone-deaf way of exploiting a disaster.)

Oculus and Space Camp still have their work cut out for them. There’s been a lot of hype from media companies, ad agencies and tech firms but VR is still far from an everyday experience for the majority of the population. Earlier this year, a survey of 3,200 adults by the research firm IBB found that 71 percent weren’t interested in VR. Of those interested, 30 percent of respondents already had their own equipment.

On the agency side, some working in VR see this week’s announcements as a “small step” in the direction toward mass adoption. Marc Jensen, chief innovation officer at Minneapolis-based Space150, said there needs to be even more content to make it worthwhile to consumers.

“Moreover, Facebook is still asking people to step out of their world,” he said. “It continues to define the category as a destination, not an experience. Compared to VR, AR brings the virtual world out. Facebook is hedging their bets on both AR and VR, but the coming ubiquity of AR limits the impact of these VR moves.”

One of the studios at the forefront of the push to make VR compelling for a mainstream audience is Here Be Dragons, a company co-founded by Patrick Milling Smith and Chris Milk. The company, which showcased its “Dispatch” VR miniseries at Oculus Connect, has previously made VR films to go along with shows like Mr. Robot and brands including GE.

According to Milling Smith, there are three related barriers to mass adoption of VR: There is the high price point, tech limitations like being tethered to a computer and the availability of compelling content.

“Today’s Oculus news was not only a huge step forward towards eliminating these aforementioned hurdles for consumers, but also a boon to us creators working to get more people to interact with this innovative type of storytelling,” he said. “Aggressively going after emerging markets with the overarching goal of getting 1 billion people into VR is huge and should be taken very seriously. It’s not whether VR will go mainstream, but how soon.”