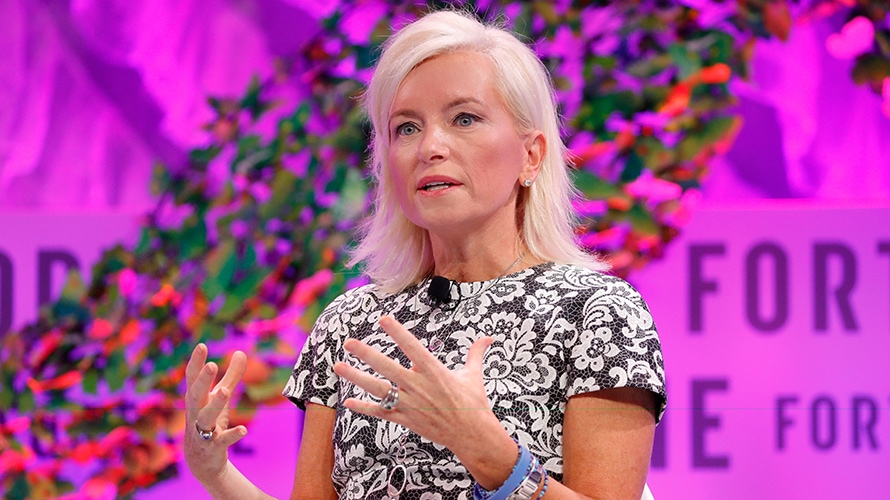 Facebook’s had a brutal year.

After being criticized for its role in spreading disinformation intended to affect the 2016 presidential election, the massive social media company has been battered by months of bad news, beginning with the Cambridge Analytica scandal, intensifying with scrutiny over fake news on the platform, and it’s been linked to violence in Germany, Malaysia, Libya and the Philippines.

Facebook has rolled out a number of changes intended to stem the flow of fake news, increase transparency and rebuild trust with people who have abandoned the service. The company has partnered with fact-checkers, started labeling ads that contain political content and made other changes, but those updates have caused headaches and controversies of their own.

On Sept. 7, Adweek interviewed Carolyn Everson, Facebook’s global head of marketing solutions, about moving forward and about the initiatives the company has rolled out to try to address looming public criticism and lawmaker scrutiny. The conversation was part of a wide-ranging sit-down interview that Adweek conducted with Everson, along with Kay Hsu, the global lead for Instagram’s creative shop, Patrick Harris, the head of Facebook’s global agency team, and Karin Tracy, Facebook and Instagram’s head of industry, beauty, fashion and retail.

Everson identified four major pillars that have been Facebook’s focus in 2018: data security and privacy, misinformation and fake news, tools and consumer education, and brand safety. The conversation also touched on the company’s attempts to address trust on the platform, how it is working with publishers and how it is bracing for pushes for more privacy.

“The average person does not understand how online advertising works or how their data are being utilized,” Everson said. “And that is not the average consumer person’s fault. That is the industry’s responsibility. We have to do our part — and I think you are starting to see a lot of initiatives [to] really provide much better tools and consumer education. But I think we collectively have a long way to go so that people understand how to protect their privacy and how data are being utilized.”

Below are several discussions from the roundtable that touched on trust, data and privacy.

On winning back peoples’ trust

Adweek: A lot of these four pillars you mentioned speak to trying to establish and maintain trust. There was a study from Pew Research Center that said more than 40 percent of Facebook users between the age of 18 and 29 had deleted Facebook from their phones in the past year. I wonder what your thinking is in terms of reestablishing that trust. Where are you trying to get those people back? What’s the path forward there?
Carolyn Everson: Trust is the most important thing. It’s the baseline, and we talk about it that way internally. That is the foundation. I know the Pew study. I do want to just say for the record that it is self-reported data. It does not match our internal numbers. I think that’s important for you to know. The more important part of your question is what are we doing to restore trust? Because there was definitely a breach of trust that happened for the consumers that were impacted by Cambridge Analytica. We’re concerned about that.

The way we think about it, you can’t rebuild trust with one thing.

We’ve done ad campaigns. We’ve spent a significant amount of money here in the U.S. We’re doing campaigns in the U.K., Australia, Germany, in a handful of markets. That’s one positive thing. That’s a step in the right direction to go out and admit fully our mistakes, take full accountability, and be transparent about what we’re doing. So that definitely helped, but it’s not the only thing. You can’t just run an ad campaign.

The way we think about it is it’s a series of actions that you do every single day, just like if it was a personal relationship. That’s how we talk about it internally. When you’re sitting with [Facebook chief product officer] Chris [Cox] and [Facebook CEO] Mark [Zuckerberg], it’s like, how do you build trust with a friend, a partner, a spouse? You build it every day by actually doing what you say, being very transparent, being humble, having full acceptance of responsibility.

If I added up all the product things that we have done, everything from changing privacy settings to doing more education to consumers to giving them full control over how their data is being used to saying that if you want to take all your photos out of Facebook and move them out, you can do that. Each one of those things, we’re hoping, adds up to ensuring that we either regain it or continue to have it with those that we didn’t lose. It’s a total focus of the company.

… We are doing so much, but it’s hard to communicate that in a succinct and simple way. There are numerous times I’m with a marketer, or even a consumer, and say, ‘Do you realize you can click the right-hand side of any app and say, why did I receive that ad, what data was used, I never want to see that ad again?’

How do Apple’s increased privacy efforts affect Facebook? Especially since Apple is not as beholden to advertising and can be a little stricter than everyone else.
Apple has made changes, and they’re going to continue to make changes. Obviously, it sometimes impacts the signals we get from the data that would be coming from an Apple device.

Overall, Apple is a good partner, an amazing partner to us across the advertising spectrum and an amazing platform partner for us, but they are making changes. They take it very seriously. We’ve had a really great relationship with them to talk about the importance of data privacy and security.

A lot of the changes we’ve made—we’ve talked about the product category change, we talked about rolling GDPR out globally—that has been viewed very positively by Apple. They feel like we’re making the right steps in the right direction.

Can you give an example of some of the signal changes that are affecting you?
Any time they make a change where let’s say if they were not to accept third-party cookies or pixel data, those would be changes that would impact us. I can’t speak to their entire road map, but any of those changes would impact signals that we get. And of course, we get signals from a lot of different places.

On how marketers are thinking about mobile

Since mobile is such a huge piece of [changes that impact signals], how does that change the way marketers are thinking about mobile, especially concerning privacy?
Any time there are changes, marketers get alarmed. Part of our strategy has always been that you can’t depend on just a few data sources. We do a ton of work around our own native. What are the signals we’re getting on our own platforms? Shopping is a really good example.

We have a tremendous amount of signals already on the platform based on what people are browsing on Instagram and how they are actually clicking to buy products. We see them reaching out to businesses through Instagram Direct. Businesses weren’t even intending to sell something, but they posted something, and consumers are very savvy, and they figure out how to direct message. All of those are important signals, but at any time, if consumers don’t want any of that particular data being utilized, they can opt out of that.

This space is going to continue to evolve, and there’s going to be stricter controls, more controls for consumers, more transparency. I think that’s all a good, healthy thing, because in order to build the digital ecosystem and the advertising industry, you’ve got to go back to the trust. The consumers have to feel like they understand how their data is being utilized, and the marketers have to feel good about the fidelity of that data.