Once just a website where movie lovers could find the show times for the latest flicks, Fandango is further expanding its FanShop to include a new Prop Shop that’s filled with replicas from the upcoming Jurassic Park film.

And that means fans can immerse themselves in the movie with a $25,000 Indominus Rex head or a $400 hatched Velociraptor egg.

“Fandango is all about servicing the moviegoer and making the experience better,” said Adam Rockmore, CMO, Fandango. “Prop Shop is our first foray into a one-of-a-kind experience for movie fans.” 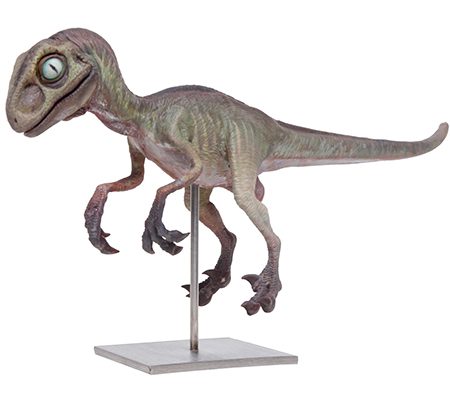 While FanShop already offers fans the chance to snatch up all matter of movie merchandise, Prop Shop is a unique initiative launched in conjunction with the upcoming release of Jurassic World: Fallen Kingdom, which comes out June 22. These molded prop replicas are specific to the Jurassic franchise.

“This year marks the 25th anniversary of Jurassic Park, so the release is also a tactical move,” said Rockmore.

The broader FanShop concept is an important part of the moviegoing ecosystem for fans who want to be more immersed whether it be through jewelry, figurines or fan art initiatives, Rockmore explained. Fandango currently attracts about 60 million web visitors per month, but the company declined to release specifics on how many of those users currently peruse FanShop.

But don’t confuse Prop Shop with your average retail experience, Rockmore warned. Prop Shop is all about a curated experience for movie franchises with a large fanbase. (There are also much cheaper options than the aforementioned dinosaur head.)

Fandango is talking to other studios about partnering to align new Prop Shop product launches with major film releases, but Rockmore said it’s too early to share any more details. In addition to simply enriching the experience, the Prop Shop further drives home Fandango’s original purpose: Getting people to go to the movies in the first place.