"Clean up in aisle 5" will be a high-tech endeavor 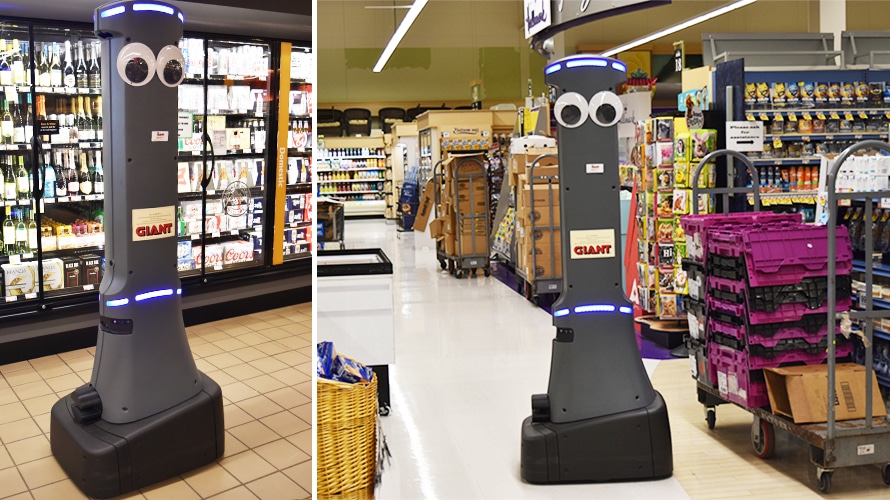 It’s as if Christopher Walken’s Googly-Eyed Gardner decided to go into retail: Supermarket chain Giant Food Stores has deployed six-foot-three-inch googly-eyed robots named Marty—and it has plans to bring him to all 172 stores across Pennsylvania, Maryland, Virginia and West Virginia this year.

Marty is the result of a partnership between parent company Ahold Delhaize, the Dutch food retailer, and autonomous robot company Badger Technologies.

At the NRF’s annual retail conference in New York on Monday, Steven Platt, director and research fellow at the Retail Analytics Council—an initiative between Northwestern University, Medill’s Integrated Marketing Communications department and the Platt Retail Institute, which studies consumer shopping behavior and the impact of technology—said this marks the largest front-of-store deployment of robots in a retail environment.

Marty doesn’t need those googly eyes to see—he has a laser-based detection system to guide him—but Nick Bertram, president of Giant, said they wanted to personify the machine to “[make] it a bit more fun” for customers and “not hide it, but celebrate the fact that there’s a robot.”

As a result, Bertram said customers have so far been more excited than freaked out—a number even going as far as taking selfies. Marty has also served as a brand ambassador, “[leaving] the store every now and again.”

According to Badger, its robots can address: out-of-stock items; compliance with planograms, or drawings of store layouts that include product placements; what it calls “price integrity”; and audit and compliance issues. However, to start, Giant will use Marty to identify in-store hazards like spills, so employees can take action faster.

Platt said he has also seen concepts in which robots stock shelves, but packaging in a grocery environment—including but not limited to jars, cans and boxes—makes it a complex task for a robot. In the meantime, he said a major focus for his organization is using RFID to enable continuous monitoring of inventory and, as a result, forecasting to tighten up the supply chain to reduce waste.

Further down the road, Rowland pointed to additional tasks in grocery stores that can be automated, such as identifying food that is nearing its expiration date.

“Robots don’t have the human sort of functionality to touch and move and stuff—working together is really the future of how that goes,” Platt said of humans and robots working together in retail environments. “A lot of retailers … are losing sales because staff is focused on customers and we know they’re not stocking enough merchandise, so they’re losing sales. It’s a complement of customer service by employing bots doing minor functions.”

Marty will roll out “in waves” over the next few months with completion expected mid-year.