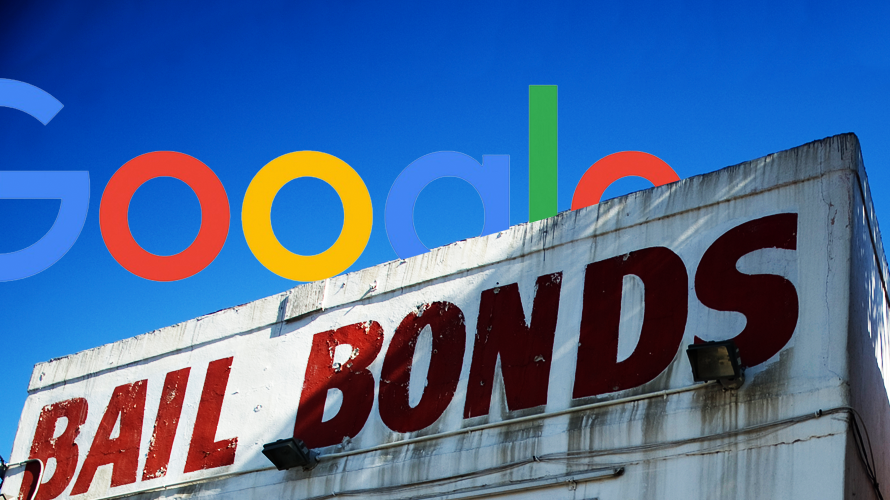 About 500,000 Americans are held in jail because they can’t post their set bail. - Credit by Photo Illustration: Dianna McDougall; Sources: Getty Images, Google

In a blog post on Monday, Google took a bite out of bail bond services. The company announced that starting in July, it will prohibiting ads from bail bond service companies across all of its platforms.

“Studies show that for-profit bail bond providers make most of their revenue from communities of color and low income neighborhoods when they are at their most vulnerable, including through opaque financing offers that can keep people in debt for months or years,” the company wrote in the post. “We made this decision based on our commitment to protect our users from deceptive or harmful products.”

Bail is the amount of money that acts as insurance between the court and the defendant. A judge sets the amount, and the defendant typically will get a bail bond to help secure release. About 500,000 Americans are held in jail because they can’t post their set bail, according to law experts Jessica Pishko and Jessica Brand—and most of this number are incarcerated for low-level offenses.

Let’s say you get arrested and bail is set at $10,000. You don’t have that kind of money, so you employ a bail bondsman, whom you pay $1,000; he’ll cover the rest through collateral from you or your family. Like your car. Or your grandmother’s diamond ring. Or your house. As long as you show up for your court dates, according to bail bond company Surety Solutions’s website, “the bail bond is dissolved at the conclusion” of your case. You get your $9,000 in collateral back. If you don’t show up, a bail bondsman turns your collateral into cash.

Google’s initiative includes “a wide range of groups and organizations who have shared their work and perspectives with us,” such as Essie Justice Group, Koch Industries, Color of Change and “many civil and human rights organizations who have worked on the reform of our criminal justice system for many years,” according to the blog post.

Not be outdone, the second dancer in the duopoly tango, Facebook, also announced that it, too, is saying no to bail bond advertisements.

“Advertising that is predatory doesn’t have a place on Facebook,” said Monika Bickert, vp of global policy management, in a statement.

Bail bond is not the first industry Facebook and Google have banned from running ads on their platforms. If you’re a cannabis company, it’s against the rules to run ads on the social network and search giant.

“It’s been frustrating for us not being able to advertise on Facebook and Google because of our involvement in the cannabis industry,” Jeffrey Zucker, co-founder and president of Green Lion Partners—a business strategy firm focused on early-stage development in the regulated cannabis industry—told Adweek in a recent story.

“This is the largest step any corporation has taken on behalf of the millions of women who have loved ones in jails across this country,” said Gina Clayton, executive director of the Essie Justice Group in Google’s blogpost. “Google’s new policy is a call to action for all those in the private sector who profit off of mass incarceration. It is time to say ‘no more.’”