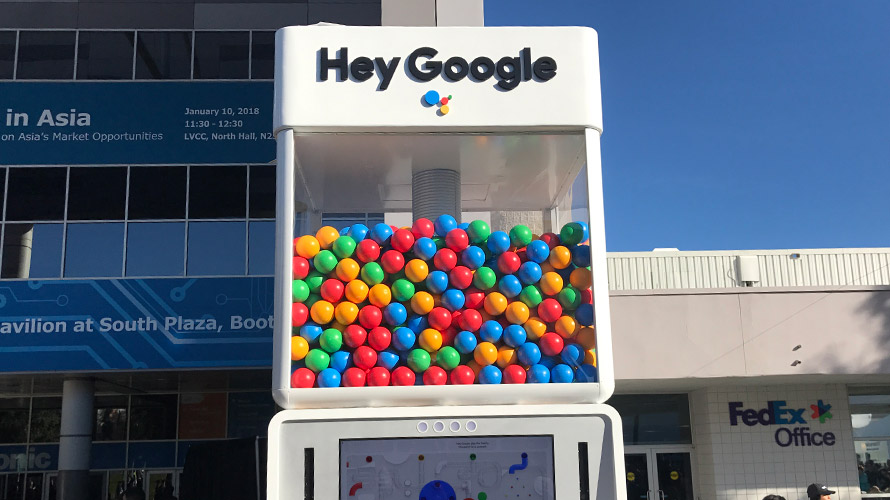 Google plans to give out around 1,400 prizes a day from its gumball machine. Marty Swant

Digital assistants are learning to activate a lot of things. They’re used to activating phones, lights, speakers, televisions and cars. Now, Google is taking a more playful route to promote its own Google Assistant this week in Las Vegas.

At the Consumer Electronics Show, Google has supersized the way people interact with its artificial intelligence platform by bringing a gigantic voice-activated gumball machine for attendees to interact with. The machine, stationed outside of the Las Vegas Convention Center, lets participants line up for a chance to ask Google a question in exchange for prizes such as smart speakers, Nest security cameras, OpenTable gift cards and Google gear.

The activation, which runs all week, invites users to enter a large coin given to them by a Google rep which then activates the machine. Once it lights up, they’re given four categories of 15 questions each to ask Google Assistant, which then answers them before doling out a related prize. Google plans to give out around 1,400 prizes a day.

We’re hitting the strip at #CES2018 to show off some of the 1 million Actions you can take with your #GoogleAssistant—just say #HeyGoogle. pic.twitter.com/ecZyDHcvCK

Yesterday afternoon, nearly 100 people were in line around lunchtime for their chance to talk with the machine, asking it questions such as “What sound does a hippopotamus make?” “Are there any diners open 24 hours in Las Vegas?” and “What is Picasso’s full name?”

However, for a while on Wednesday morning, there was another question everyone outside was asking that even Google Assistant couldn’t answer: When is the power coming back on? After a partial power outage forced the Central Hall of the convention center to go dark, the gumball machine outside also got shut down, leading the mass of people to let out a loud cheer when it finally came back to life.

The activation is one part of Google Assistant’s overall presence at the show this week, where around 180,000 attendees converge to see and sample technology from around the world. Across a parking lot, Google also constructed a three-story Google-themed playground to promote Assistant, where people can visit different rooms to better learn about how the technology might be useful to them on a daily basis. (Google’s also running more traditional promotions as well by taking over the Las Vegas monorail system with ads for Assistant.) 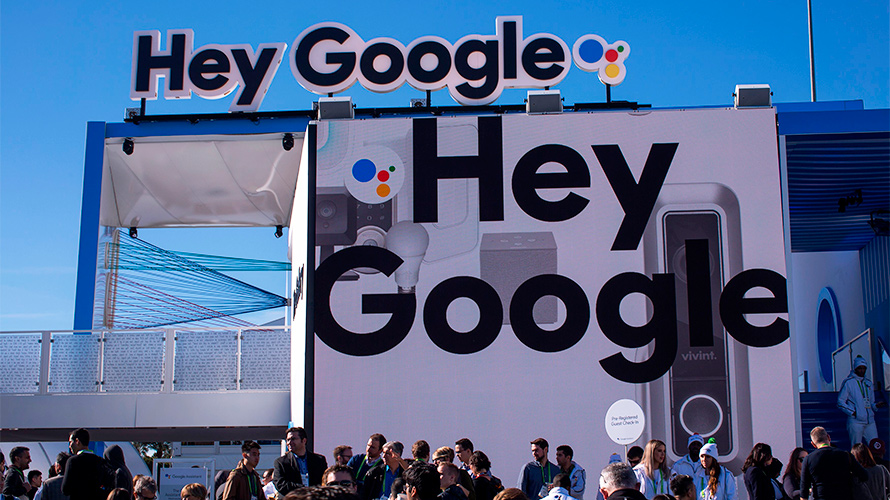 The large push is one way for Google to compete with its rival Amazon Alexa, which has a more muted presence this year even while various companies announce integrations with their own cars, refrigerators and other electronics.

Google is also making its way into more products: On Monday, Lenovo announced its first Smart Display, a screen activated by Google Assistant that looks and operates similar to Amazon’s Echo Show.