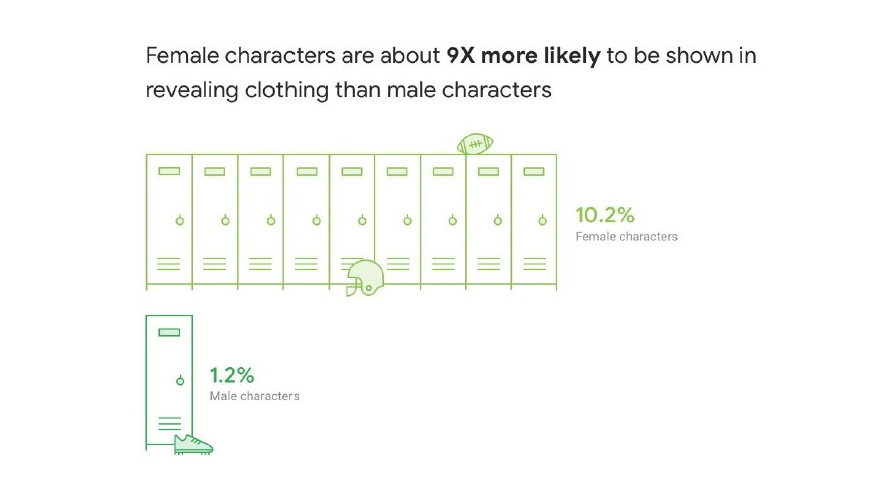 Women accounted for 47% of total viewers of Super Bowl LI in 2017, according to Nielsen, and they represent 50.8% of the total population of the U.S., according to the Census Bureau, but you wouldn’t know it by watching commercials during the Big Game.

Researchers for YouTube parent Google analyzed 273 Super Bowl ads that ran between 2015 and 2019, and the company shared its findings in a blog post on Friday.

Men are typically represented in traditional, authoritative roles when featured in Big Game ads, according to Google, while women are often portrayed in stereotypical ways. Google found that male characters were 1.5 times more likely to be shown working or having an occupation and twice as likely to be shown as leaders.

Google said its ongoing work with the Geena Davis Institute on Gender in Media has helped it determine that marketing content on YouTube that features female leads and gender-balanced content drew 30% more views than male-dominant fare, despite representing less than one-half of the videos studied by the two parties.

Procter & Gamble was spotlighted in the YouTube blog post, both for its Like a Girl spot in 2015 for its Always brand and this year’s Olay ad and its star-studded, all-female cast.

P&G will also run a pregame spot for its Secret brand, advocating for gender equality.

Secret associate brand director Sara Saunders said in the blog post, “More than two-thirds of girls believe that society doesn’t encourage women to play sports. We’re setting out to change this notion by spotlighting world-class female athletes on a field where they lack equal opportunity.”

YouTube concluded, “For much of its existence, the National Football League’s Big Game has been home to ads that featured action, comedy and plenty of men. When women were featured at all, there was a good chance that they’d be sporting a bikini. In short, the ads in what has become the nation’s biggest TV event were made by men, for men. To a certain kind of marketer, it made a certain kind of sense. The assumption was that the game was watched predominantly by men. But that’s no longer the case.”