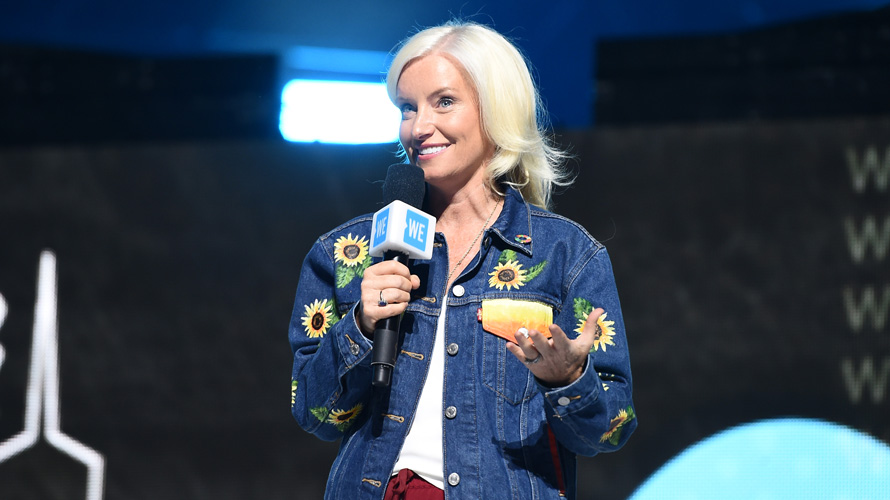 Carolyn Everson, Facebook’s vice president of global marketing solutions, has her hands full. And not just because she’s overseeing the social network’s advertising division in the midst of the coronavirus lockdown—she has eight people in her New Jersey home. Plus six dogs.

“It’s crazy,” she said during a recent interview over Zoom, as she bounced on an exercise ball in her bedroom-turned-office.

Everson, like everyone else in the advertising and marketing industry, is adjusting to the new norm. She tells her team, “you can’t just take work and plop it into your home. You just can’t, it’s not practical. So you gotta think about your schedule differently. Think about breaks differently during the day.”

To that end, Adweek is starting a series called How I Keep My Balance, asking industry leaders how they’re shifting their processes during these times while staying positive and active. In the coming days, we’ll talk to executives at Bloomberg and The New York Times. If you are a media executive who wants to share their story, let us know.

This interview has been condensed and edited for clarity.

How has your schedule changed?
Everson: Here’s how I’m adapting to the new normal. I’ve changed my schedule. I’m not starting my calls, which I typically did when I commuted into New York, at 6:30 or 7 a.m. Now I’m getting up, I’m doing exercise on some apps that I downloaded. I’m doing a yoga thing and a plank challenge.

Which apps?
The plank challenge is free. It’s kind of clunky, if I’m being honest. It’s just called Plank Workout, but I like it a lot. And there’s Asana Rebel [a yoga app], and then I have a meditation app at night.

So, I talk about this very openly on my video. [Everson posts videos to the whole company.] I tell people that I tried for the first few days to take my entire work schedule and plop it into my home life. And I sat in this room, which is my bedroom, from 7 a.m. to about 9 p.m. I went down for water a couple of times. I didn’t even stop to eat because it was, like, no time.

And I was like, “This is absurd. What am I trying to prove? I’m working. Everyone’s working. This is dumb.” And I felt like everyone was trying to prove to me that they were working. So they were scheduling meetings to connect and show me that they’re on stuff. And I’m like, “OK, this is too much.” I’m talking openly about it.

Beyond the changing structure of the workday, what are you doing to decompress? Like, what TV shows are you watching?
I’ve got eight people in the house, and we come together at night. We’ve decided the first floor of my house has got to be sacred community space. It’s where we eat and it’s where we watch TV or play games.

I’m watching Homeland with my daughter. My mom, we’re trying to introduce her to Netflix and Hulu, so we’re starting with Handmaid’s Tale on Hulu, and we’re watching a documentary on HBO, McMillion$, which is good. So we’ve got a few things that we’re exploring.

My mom—and when my dad was alive—would have the news on all day long, and I’ve sort of put a moratorium on it. I don’t want the TV news on all day long because it’s gonna make everybody’s anxiety level peak. The TV’s off unless there’s a really important press conference or something that we feel like we need to tune into.

Any books?
I just finished an awesome book—and I had not read a book, like an actual normal book [in a very long time]. The last time I read normal books was when my dad died. I got a gazillion grief books. And I got sick with the flu in February and I read a book called Signs, which really helped me. But I read Daisy Jones & The Six. Loved it.

What are you cooking?
So that’s a fun thing. We’re doing a combination of supporting local businesses. For lunch, we order in from a local business, Tinga, a Mexican restaurant.

But tonight [this interview was conducted in late March], we’re having meatballs. Last night, we did chicken. As the crisis started up and we have dinners, we’re trying to eat as a family, not ordering in as much but really cooking.

What else?
I’m taking walks with my dogs. I have four of them, so we go outside. I’ve never seen more neighbors than now. I think there’s going to be a lot of silver linings, things that come out of this. I hope that we will, as a society, think about our time and work a little differently coming out of this, and not just go right back to the way we were. That would be sad; that would be like we didn’t learn anything from this.

But I’m going to do my best to try to keep some of these new habits that I’m just starting to form. You know, think about my job. I haven’t sat down with my family for dinner during the week, maybe once a week, typically. The fact that we’re sitting as a family every night, that’s a big deal.