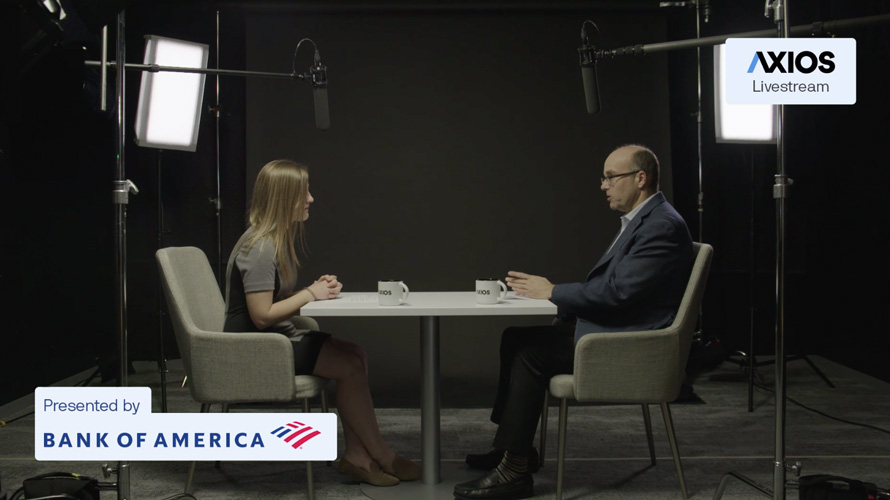 Mid-last week, as the novel coronavirus spread in the U.S. and workforces throughout the country began sending their staffs to work virtually, Axios’ leaders “paused for about a half a second,” said Kristin Burkhalter, vp of events at Axios, and then flew a million miles a minute to figure out what an event could look like without the usual variables that make an event an event, like in-person schmoozing.

What is usually done in six weeks was pulled together in a little over one, a hustle that led the media company to put on its first entirely virtual event Thursday, presented by Bank of America. Live from the news organization’s studio in Arlington, Va., Axios’ reporters hosted discussions related to the pandemic. (Only five people were allowed to occupy the studio at any given time.)

“The only thing you’re taking out is the catering,” Burkhalter said.

As the country stays home, Axios isn’t the only publisher left with brainstorming how best to maintain the momentum it had with an events business. Facing pressures to diversify revenue streams, media organizations have made deep investments in events, gatherings that have the potential to put high-profile industry leaders, sponsors and reporters in the same room.

In all, publishers are generating about $22 million in revenue from event registrations, or about $3 million per event, according to Bizzabo, an event software company that works with publishers like The Wall Street Journal, The Atlantic and CNBC. Publishers held more than 300 events, about seven per publisher, last year, according to data from Bizzabo. It remains to be seen how much revenue publishers stand to bring in from virtual events, compared to their in-person counterparts, particularly when there aren’t actual rooms to display branded signage or physical participants’ necks on which to hang branded lanyards. 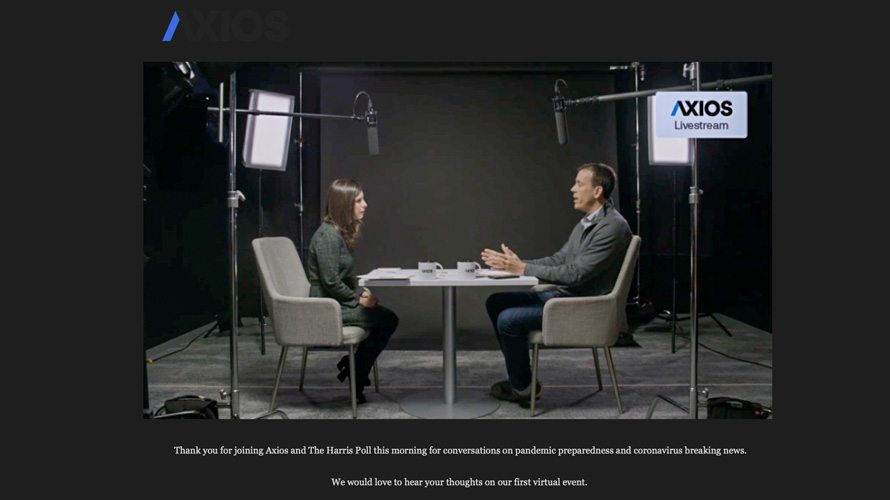 Axios made sure to email those who registered after the event ended.
Axios
“This may unlock new audiences and allow us to get our smart messaging out to a whole new audience pool,” Burkhalter said. “Yes, it’s not ideal that we are completely turning on a dime and changing our live events where there’s a really important element to have that in person engagement. We are primed right now with all the technology out there and with the fact that people are used to joining virtually.”

Ahead of the virtual event, Axios put a call out for questions over social media that could be asked during the 30-minute event. Afterward, it also sent an email notifying those who registered for the event to rewatch.

The Wall Street Journal will be turning its Health Forum, originally scheduled for next week in D.C. and, according to its website, featuring speakers like the president and CEO of CVS Health and the president of the American Medical Association, into a virtual event, said Suzi Watford, evp and CMO at the Journal.

It’s not clear if all sponsors listed on the website were still on board, and a spokesperson did not return a request for comment as to if they were. By the end of the week, at least one advertiser, AbbVie, dropped from the sponsor page on the event’s website.

Some other WSJ’s events scheduled for this spring have also been postponed, Watford said in a provided statement.

“WSJ events have always created a unique opportunity to bring our journalism to life and build strong member communities. Obviously we are rethinking how best to move forward now given the extreme importance of prioritizing the health and safety of our employees, attendees and speakers,” Watford said, later adding, “… We are starting to experiment with other ways to get factual news and information to attendees while providing moments of connection—which feels more critical now than ever before.”

Newer media organization Protocol (the tech site funded by Politico’s publisher) went live not even two months ago, which means the publisher is only just creating its own events arm instead of having to tear down (or even rethink) an existing one. It has held one in-person event, near when it was first launching in Davos, Switzerland, and had a SXSW event planned before that event was canceled. It also held its first virtual event, a meetup, this week, which was not sponsored.

“We’re doing these because our network is responding and asking for them. We’ll eventually figure out and have monetization on some of them,” said Tammy Wincup, president of Protocol. The site has a handful of other virtual events scheduled throughout this month and next, mostly conversations with reporters and top industry leaders.

As media organizations continue to experiment with virtual events, they should keep in mind that it’s a “whole new form of storytelling,” said John Pavlik, professor of journalism and media studies at Rutgers University.

“If media organizations really want to be successful at doing virtual events, they have to realize it’s a whole new medium and reinvent the kinds of events they can do to utilize the qualities of the online medium,” he said. “It’s a different kind of experience for people.”