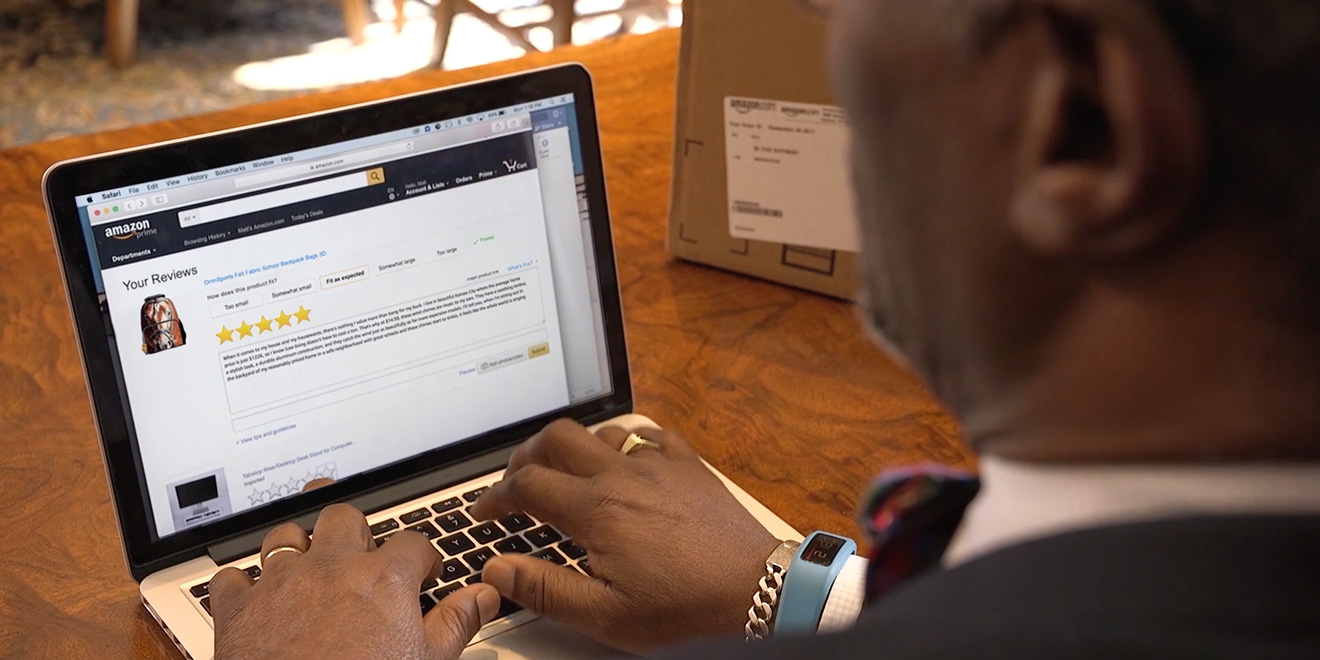 Inside those reviews, he’s snuck some talking points for Kansas City itself.

“10/10 would recommend this horse bag from OrrinSports,” says one glowing bit of praise about a felt children’s backpack. “The 3D-simulated animal face pattern is so realistic, it looks like the stallion is charging right at you if you were to look over your back and at a mirror at the same time.”

James proceeds to describe how he bought one disembodied horse-head bag for himself, and one for a bunch of art students in his hometown. He then segues into talking up the city’s general participation in the arts—third in the country—while imagining the potential to fill the equine satchel with googly eyes and other essentials.

The 5-star blitz was cooked up by local agency Barkley, which also did the copywriting for James. It cleverly works in various benefits Kansas City might offer an internet shipping giant. There’s a plug for the city’s high-speed Google Fiber infrastructure in feedback left on the Amazon page for Fiber One breakfast cereal (woven in between poop jokes). A toddler’s train engineer costume, meanwhile, serves as a vehicle to promote the city’s capacity for handling railroad freight. Wind chimes sing about low median home prices, and so on and so forth.

You can see loads of the reviews at kc5stars.com. (The agency says James purchased 1,000 items, but many of those were multiples of the same item. There are reviews for 108 different products on the kc5stars.com site.)

Mayor James also made some videos tied to some of the product purchases:

It’s a cute bit of propaganda, setting the city apart—at least in terms of amusement value—as it wades into the not-entirely-dignified fray of cities across the U.S. offering to rename themselves Amazon (see: Stonecrest, Ga.) and throwing tax incentives at the corporation (cough: Newark, N.J.) as they grovel for the 50,000 jobs it’s promising to bring wherever it lands.

Not everyone is that entertained by K.C.’s antics, though. In fact, some see the stunt as self-defeating.

“So you think that Amazon and its customers are going to like you more because you introduced bad data into their review system by posting a large number of 5-star reviews whether the product deserved them or not?” writes one commenter on the horse-face-backpack review. “If so, you don’t understand technology people much.”

Adds another commenter: “I totally agree. This is an insult to Amazon customers who use the reviews to determine if they are going to purchase a product. It shows a complete lack of respect for Amazon’s review system and its customers.”

Other commenters seem charmed by the cleverness of the idea.

Etiquette police, aside, the truth is Kansas City doesn’t appear to be a front-runner for the gig, according to research from firms like Moody and Everest Group—which have put out lists citing New York, Atlanta, Boston, Dallas, Washington D.C. and Chicago as more likely candidates, based on the size of the skilled labor base Amazon is anticipating.

Whether it’s even wise to lure the company in is a different question altogether. But the good news for Kansas City is that, even if it doesn’t stand a chance, it’ll always have this delightfully ridiculous campaign as a sort of tourism pitch, snuck onto the national stage.