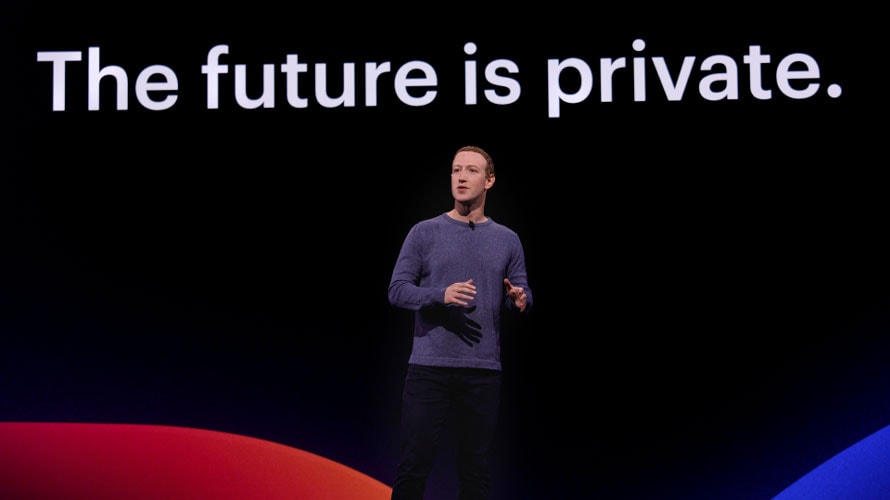 Facebook continued its tradition of using its F8 developers conference to reveal a plethora of new features, updates and redesigns, but privacy—both issues of the past and plans for the future—took up a good chunk of CEO Mark Zuckerberg’s keynote address.

Vice president of global marketing solutions Carolyn Everson said during an F8 press event at the social network’s offices in New York, “It has not been an easy 18 to 24 months: I’m not going to sugarcoat it. The cultural shift at Facebook has been the biggest one by far.”

Continuing the theme of the detailed note he wrote in early March about Facebook’s future being centered around private, encrypted services, Zuckerberg said during his keynote in San Jose, Calif., “Privacy gives us the freedom to be ourselves. The future is private. This is the next chapter for our services.”

He continued, “In addition to the digital town square, we also need a digital equivalent of the living room,” adding that the social network will focus on private interactions, encryption, reduced permanence, safety, interoperability and secure data storage, but admitting that he expected the company “to keep on unearthing old issues for a while.”

However, Zuckerberg’s attempt at humor fell flat. He said, “I know we don’t exactly have the strongest reputation on privacy right now, to put it lightly,” which drew crickets from F8 attendees and the ire of one privacy group.

Freedom From Facebook co-chair Sarah Miller said, “Mark Zuckerberg feigning concern over user privacy today at its F8 conference is laughable. It was a blatant effort to further lock in Facebook’s monopoly and prevent the public from seeing the damage its market power will continue to do to democracy. The Federal Trade Commission needs to wake up and smell the B.S.; Facebook will always protect its bottom line over its users. The FTC must step in and break up Facebook before it is too late.”

Perhaps the biggest news on the product front from Day One was a complete overhaul of Facebook’s flagship mobile applications and its desktop site.

The revamp began rolling out for iOS and Android Tuesday, with desktop to follow in the next few months. 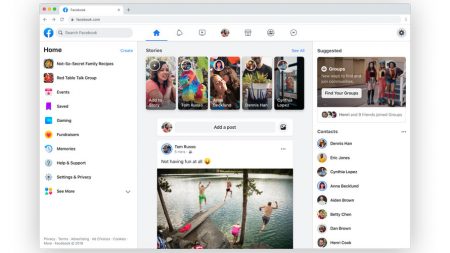 “The app isn’t even blue anymore,” Zuckerberg said, drawing a much more favorable reaction than he did with his privacy comment.

He said there have been four major versions of Facebook thus far, and this is the fifth, hence the name FB5. The new design is simpler and faster, and groups are placed at the heart of the experience with the aim of “making communities as central as friends.”

Zuckerberg said FB5 marks the biggest change to Facebook’s apps and website since it took its apps native five years ago, and even the Facebook icon received a touch up.

There are currently tens of millions of active groups on Facebook, and over 400 million people belong to a group they find to be meaningful.

FB5 includes a redesigned groups tab with a personalized feed of activity from groups a user belongs to, as well as a new discovery tool. 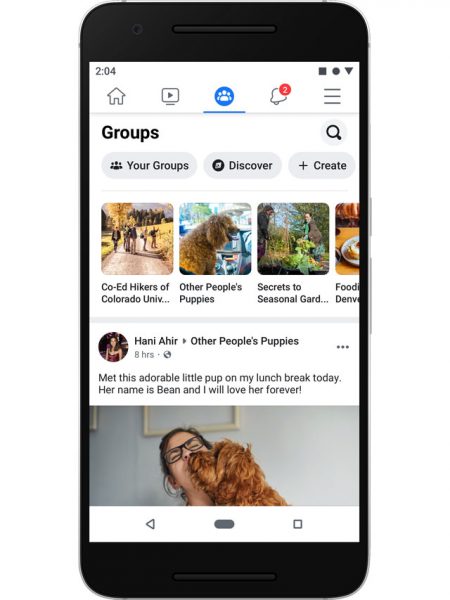 Relevant group recommendations will also appear in other areas throughout Facebook, including ecommerce destination Marketplace, local news feature Today In, video destination Facebook Watch and the social network’s gaming tab. More content from groups will appear in News Feed, and people will be able to share content directly to their groups from the News Feed. 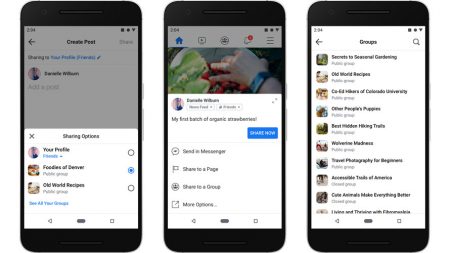 And new features will address the specific needs of certain types of groups, such as the ability to post anonymously in health support groups.

Other new features coming to Facebook will include the ability to ship Marketplace items anywhere in the continental U.S. and to pay for those purchases directly via Facebook, as well as a refreshed events tab.

Other highlights of Day One included:

Facebook Messenger will undergo an overhaul, as well. Project LightSpeed, set to roll out later in 2019, will bring users a faster, lighter app with several new features, as well as a new desktop app for Mac and Windows.

Fellow messaging app WhatsApp will get a business catalog feature in the coming months, giving people a way to see what businesses offer while chatting with them. Zuckerberg called this feature “especially important for all of the small businesses out there that don’t have a web presence.”

Instagram added the ability to shop directly from creators on its platform, as well as a donation sticker for Stories and a refreshed camera, which includes a Create Mode enabling users to start Stories with elements other than photos or videos.

Facebook Dating, which the social network first mentioned at F8 2018, was added in 14 more countries Tuesday, and a new Secret Crush feature enables people to discreetly look into whether there are any potential romantic connections among their friends.

The social network is testing a Meet New Friends opt-in feature that enables people to find friends in shared communities such as schools, workplaces or cities.

Facebook’s Portal video-calling device will be made available in Canada, with Europe to follow, and new features will be added, including end-to-end encryption for all calls.

Pre-orders are being accepted for all-in-one virtual reality gaming system Oculus Quest and new VR headset Oculus Rift S, both of which will ship May 21.

The new Oculus for Business will debut later this year, complete with a suite of tools to enable businesses to take advantage of VR.