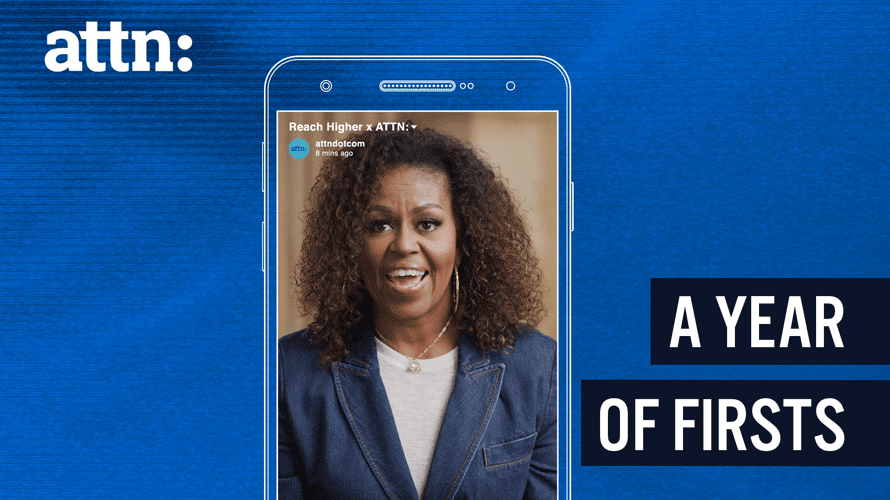 A Year of Firsts will share the stories of four first-year college students from across the country. - Credit by ATTN:

Michelle Obama and her Reach Higher initiative teamed up with ATTN: on a new IGTV series aimed at first-year college students across the U.S. called A Year of Firsts. The first episode will debut on IGTV in mid-January.

What's the first year of college REALLY like? ???? Join @attndotcom, @michelleobama, and four first-year college students for our new IGTV series with @reachhigher to find out! Episodes coming soon on IGTV.

ATTN: co-founder Matthew Segal said that the publisher has done a lot of work with the Obama family over the past two years, including creating short-form videos about the fellows and fellowship programs from their nonprofit Obama Foundation, as well as get-out-the-vote videos prior to the 2018 midterm elections with former President Barack Obama.

“All of this allowed us to have an interesting conversation with Michelle’s team about getting students to enroll in college,” he added.

Michelle Obama started Reach Higher during her tenure as first lady with the goal of inspiring students in the U.S. to continue their education past high school via professional training programs, community colleges, four-year colleges or the military.

Six-episode series A Year of Firsts will share the stories of four first-year college students from across the country as they deal with issues including academic stress, creating new friendships, financial struggles and physical and mental health challenges. The series will wrap in June as the school year comes to a close.

Segal said IGTV was the optimal platform for ATTN: and Reach Higher because they sought to create videos that were at least three minutes long, and videos in the main Instagram feed are limited to 60 seconds.

He cited a study that found that 65% of Gen Z respondents viewed Instagram as a major source for political news, adding that the average user spends 28 minutes per day on Instagram. As for other platforms, Segal said the demographics of TikTok and Snapchat trended a little bit younger than the age group Reach Higher was targeting.

ATTN: is no stranger to the political landscape, as it also introduced former vice president and current Democratic presidential candidate Joe Biden to IGTV via 10-episode series Here’s the Deal With Joe Biden, which debuted in September 2018 just three months after IGTV’s release.

“We film content in a premium way, vertically shot, thinking about best practices, retaining viewers and optimized for sound on/sound off,” Segal said. “We are seeing much higher sound-on viewing on IGTV.”

Michelle Obama said in a statement, “As a first-generation college student myself, I know how intimidating it can be to take that leap and pursue your educational dreams. That’s why I’m so proud of these students. By sharing their stories, they’re helping others see that the ups and downs of the first year of college are something everyone goes through, and they’re creating a supportive community for others facing similar challenges.”