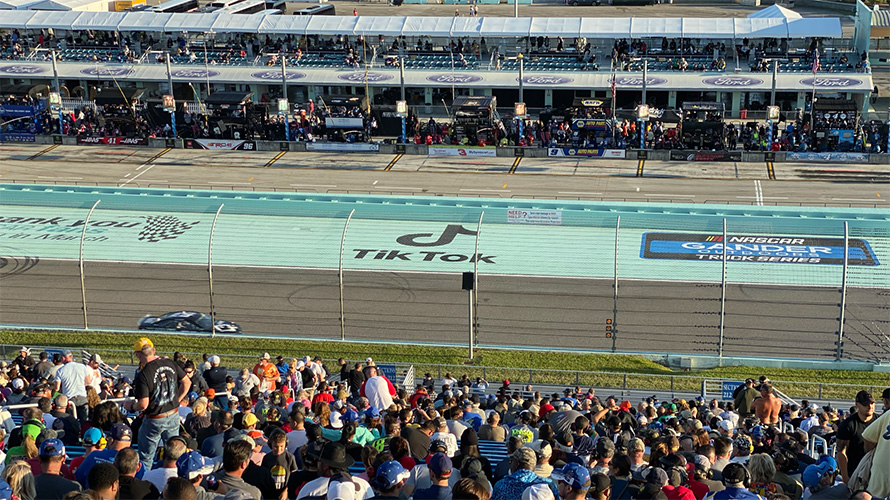 Nascar is often associated with the deafening sound of revving engines, but its entry onto popular video-sharing platform TikTok was rather quiet.

The Nascar TikTok channel debuted last October near the end of its racing season, with no promotion on other social platforms. Think of it as Nascar’s test lap, as the league tries to understand this new track.

Chris Littmann, director, social media content, Nascar, said his team spent months lurking on TikTok to learn how to understand the platform and approach in the right way, developing a vision for the type of content Nascar wanted to create. Meantime, in roughly three months, the channel roared past the 90,000-follower mark, and views of videos with the #nascar hashtag are currently at 245.7 million and counting.

“A part of me kicks myself that we didn’t do it at the beginning of 2019,” Littmann added. “I wanted to be respectful of my team’s time while they spend the weekend traveling or hunkered down in our Charlotte headquarters, and not just say, ‘Hey guys, here’s another platform, good luck.’”

Some of Nascar’s content on TikTok is repurposed from other platforms, while some are created exclusively for TikTok, and everything has been organic, thus far, with no entry into advertising.

“We’ve gotten walk-throughs of a lot of different paid products,” Littmann said. “The opportunities are similar to the early days of Snapchat, when attention in the application was less fragmented. We could see something like a promoted hashtag challenge for sports in the future. TikTok is very creative about ads blending in and feeling unobtrusive.”

Littmann said one of Nascar’s most popular videos on TikTok depicts a crew member who looks like he’s using the “People’s Elbow”—the signature move of Dwayne “The Rock” Johnson during his wrestling days—to knock the dents out of the back of a truck.

His team added World Wrestling Entertainment sounds that were already available on TikTok, followed by the sound of someone screaming, and then an audio clip from “Crazy” by Gnarls Barkley. The video has 114,600 likes to date.

And when driver Brad Keselowski came in a little too hot for a pitstop during a race at Talladega Superspeedway last April, spinning around and pitting backwards, the Nascar social team saw an opportunity.

The video they created with the content—which toggles between a Nascar employee parallel-parking his truck with quiet music followed by Keselowski roaring into pit row to much louder music—tallied 270,600 likes to date.

Nascar’s 2020 season kicks off with the Daytona 500 Feb. 16, and the league is still experimenting with its TikTok strategy, analyzing the results it has seen so far with an eye toward a more formal blueprint as the year progresses.