National Geographic ventured into uncharted territory last week, this time on Instagram, where it became the first brand to top 100 million followers. But the publisher’s success is more than organic. Its revenue from social advertising was up 80 percent in 2018 compared with the previous year.

Topping 100 million is a nice vanity number. It lets Nat Geo breathe the same air as soccer and pop music superstars as well as The Rock and the occasional Kardashian or Jenner. The company also tallied more than 42 billion impressions on Instagram in 2018, including both organic and sponsored content.

While Nat Geo would not break down specific numbers, citing its majority ownership by 21st Century Fox and Disney’s impending acquisition of Fox, National Geographic Media executive vice president and general manager David Miller did say, “80 percent is not an immaterial number. We’re not talking about going from $100 to $180. This is well over seven figures.”

The company credited its 130-plus photographers for its success on Instagram, saying that giving them complete control over the account and allowing them to post directly to the feed has helped Nat Geo “cultivate an entirely different level of authenticity.”

Aaron Huey said he was one of only about a dozen Nat Geo photographers who started using the Instagram account after its 2012 debut, and there was “lots of hesitancy” from his colleagues.

“So many things can only be told in Instagram,” Huey said. “There is obviously not enough space in the magazine. You might spend a year and a half to get eight, 10 or 12 published pictures, but in that same time period on Instagram, you can tell 30, 40 or 50 stories.”

That authenticity also carries over to Nat Geo’s partnerships with brands such as Samsung and Lego. Miller noted Nat Geo’s ability to bring 130 years of content to the table and said, “The assets we have available because of our relationships with photographers are a core competitive advantage. We can bring images to people that most other brands and social accounts don’t have the ability to do.”

He added that Nat Geo focuses on understanding advertisers’ key performance indicators and helping them tell their stories, but the key is making sure the integration is natural. “Pure advertising or no contextual relevance in ads will lead us down a path where we’ll lose the trust of our fans,” Miller said.

For example, posts sponsored by Samsung mention that the images were captured with Samsung devices, but the remainder of the captions are devoted to the images themselves, and not the electronics-maker. 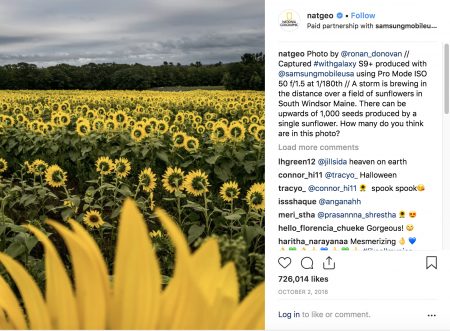 Other than mentioning that the image was captured with a Samsung Galaxy S9+, the caption stayed true to Nat Geo form
National Geographic

Meanwhile, Lego sponsored a post of a mountain climber, weaving its narrative into the caption as follows: “Climbing mountains is a puzzle … it’s stacking piece upon piece.”

Does 'stacking piece upon piece' remind you of Lego?
National Geographic

The company also helps “purpose-driven brands” tie in with events that fit well with their initiatives, which Stella Artois did for World Water Day.

Miller said Nat Geo works closely with photographers when their assets are used in campaigns, ensuring the fit is there and enlisting their help with captions. The company will also partner with photographers and commission projects if it doesn’t have access to suitable assets.

The emergence of Instagram Stories factored in to Nat Geo’s strategy. Miller pointed out that while hyperlinks can’t be added to captions for single images, “stories allow us to drive people directly to other websites or more robust brand experiences.”

On the creative side, Huey said he and his colleagues used to post every day. He did that during a 90-day assignment in the Himalayas in 2013 and 2014. But Stories let them easily break up that content.

“Instagram has completely changed how we do work in the world,” Huey said.