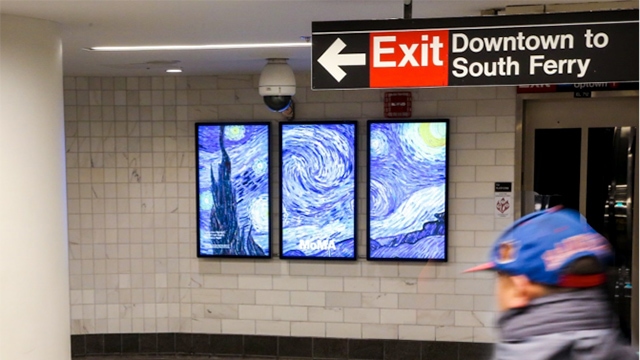 A new program from Outfront brings art to subway stations. - Credit by Outfront

One of the biggest outdoor media companies is adorning subway stations with more than just advertising.

Outfront Media announced a partnership on Monday that will feature iconic works from the Museum of Modern Art on digital screens in public transit stations and within some train cars across the New York MTA, Metro North Railroad and Long Island Railroad. The deal is part of a new program meant to explore ways that Outfront can add more editorial content to its digital billboards in major metro areas across the country, such as Boston, Washington, D.C., and the San Francisco Bay Area.

The museum will curate a new selection of artworks for the billboards each month, including paintings, sculptures, animation and video. The inaugural collection includes Vincent van Gogh’s The Starry Night and James Turrell’s Meeting. MoMA is not paying Outfront for the deal, and placements won’t be specifically targeted—although Outfront said it is considering the possibility for content deals in the future.

Outdoor advertising has traditionally been unique among mass media in that the advertising is the main attraction—there are no news articles, TV shows or other content around which to advertise. But Outfront Chief Product Experience Officer Jason Kuperman said that could change as digital programming and more advanced targeting make it easier to deliver a more nuanced experience to each screen placement.

“We figured as we move into faster, vaster deployments of digital out-of-home, we have an opportunity to mix a little bit and to start including content with the advertising to increase the attention that the advertising earns from audiences,” Kuperman said. “We’re looking across a typical programming spectrum across everything from art, sports and entertainment to news and fiction, non-fiction—all kinds of content types.”

While most outdoor companies have dabbled in simple pieces of feed content like weather forecasts, sports scores and horoscopes, Kuperman said Outfront is hoping to experiment with much more complex formats like native content, sponsored visuals and more in-depth, unpaid editorial.

“What we’re trying to do with the deployments is provide content that is a little more unique and can surprise and delight,” he said.

But the project isn’t just about drawing more eyeballs to screens in the short-term. Digital out-of-home industry figures like to tout their product as the only digital medium that can’t be avoided with an ad blocker, but people may start to feel overwhelmed and tune out as screens proliferate their daily lives. Kuperman is hoping more engaging models of content and ad delivery can help mitigate that effect.

“We feel like we have a profound responsibility that as we put digital in all these places that people are going to encounter it, that we keep an eye on the experience we are creating,” Kuperman said.