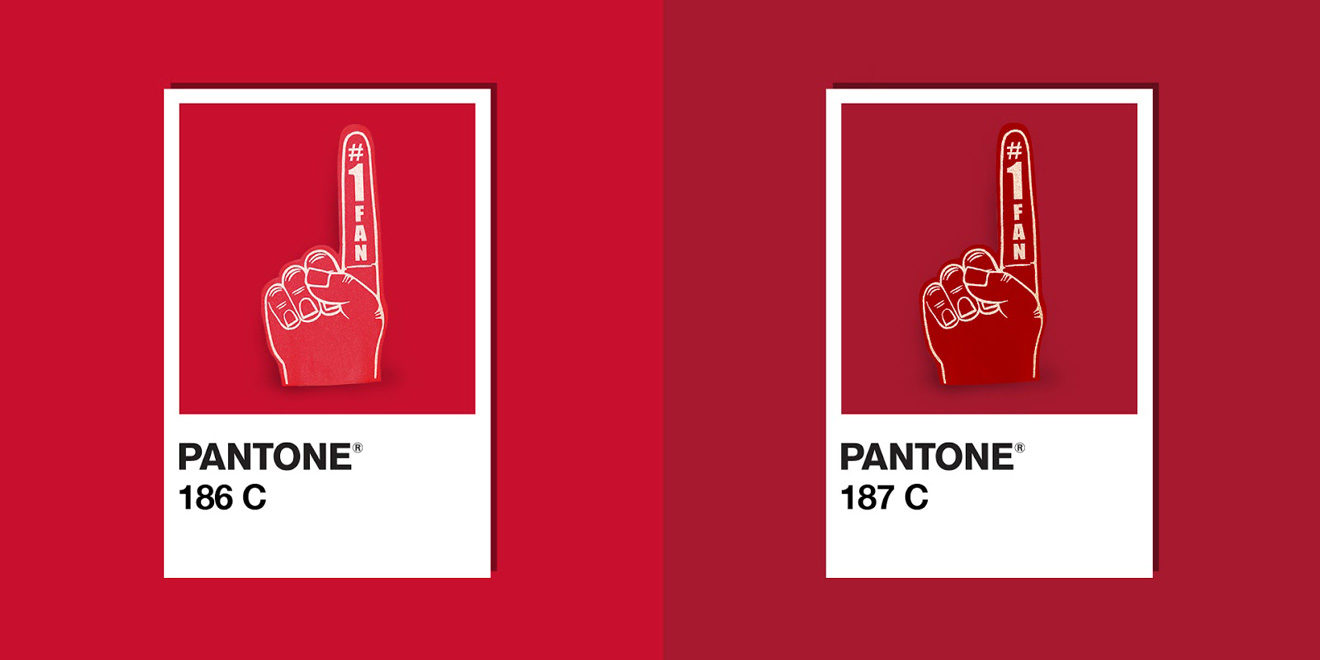 The red colors of the Kansas City Chiefs and San Francisco 49ers are next to each other in Pantone's color code system.
Pantone
Share
By Ian Zelaya
|
January 30, 2020
Share

Pantone is making its Super Bowl debut by offering color commentary during the game—literally.

The color standards company will launch a social media campaign providing insights and commentary during Sunday’s championship game between the Kansas City Chiefs and San Francisco 49ers. The campaign celebrates the fact that for the first time in the Super Bowl’s 54-year history, both teams wear red as their primary color: specifically, Pantone 186 C for the Chiefs and Pantone 187 C for the 49ers.

Using the hashtag #BigGameColorCommentary, the company plans relate its color system codes and general color knowledge to everything from play-by-plays and Super Bowl facts to popular game day food and, of course, Super Bowl ads. For example, the company might mention Pantone 3945 C in regards to a yellow flag or Pantone 1585 C for Cheetos’ ad. The company initially considered commenting on Mr. Peanut’s funeral but chose other ads as Planters hit pause on the campaign in light of Kobe Bryant’s death.

Pantone partnered with agency of record Huge for its first Super Bowl initiative, titled “Big Game Color Commentary,” which will take over the company’s Twitter account and Instagram Stories Sunday. Jason Musante, chief creative officer, Huge, said Pantone saw the red vs. red matchup as an ideal opportunity to play on the role of sports commentators and analyze the game through the lens of the Pantone color system.

“Pantone sees this as a natural and authoritative way to join one of the biggest marketing moments of the year,” Musante said. “This adds a fun, participatory element that shines a light on a brand that’s well known within creative communities, and leverages the game to spread their message to people not as familiar.”

Pantone and its Pantone Color Institute, a consulting service that predicts global color trends and advises companies on color in brand identity and products, regularly partner with professional and college sports franchises to create custom colors and ensure color consistency across all franchise products.

Musante added that Pantone hopes the campaign will help more consumers understand how impactful the company is in the sports industry.

“They make sure the color of the 49er jersey I wear is the same color as the jersey on the field. Pantone is why we wear the correct color of our teams,” he said.

Since 2000, Pantone has inserted itself into the cultural conversation with its annual announcement of Color of the Year, which influences marketing decisions and product development in numerous industries. The company announced Classic Blue as its 2020 Color of the Year with an immersive event. Pantone has also partnered with brands to help create their consumer experiences including LG, Marriott and the Macallan.

Ian is an experiential marketing reporter at Adweek, where he covers brand activations and experiential trends.