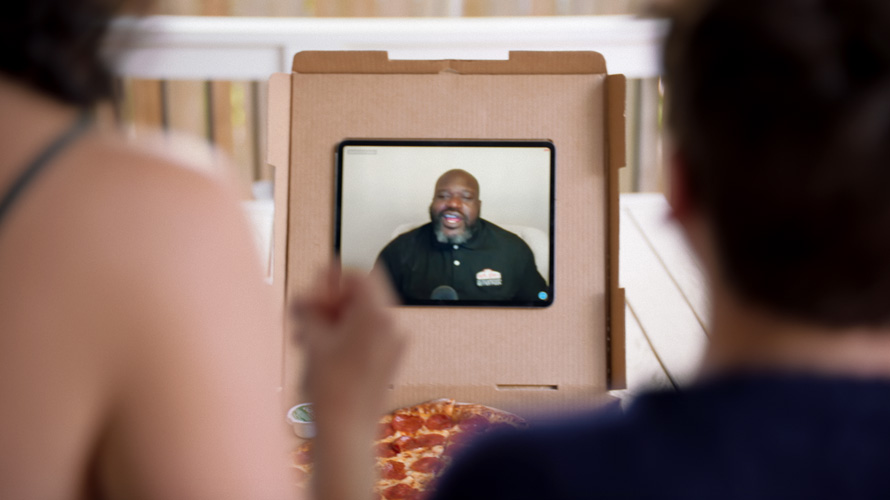 For the new spot, Shaq went inside the pizza box. - Credit by Papa John's

Shaquille O’Neal is making his mark on the menu of Papa John’s.

His new item—which the chain has been teasing on its website—is an extra large pepperoni pizza with extra cheese and extra pepperoni, named the Shaq-a-Roni.

The pizza launches today, and for every Shaq-a-Roni purchased Papa John’s is donating $1 to the Papa John’s Foundation, which supports community organizations that address social injustice issues.

“It was important to me for the Shaq-a-Roni to be bigger than just pizza,” said O’Neal in a statement.

Papa John’s also released a 60-second spot to promote the new pizza. O’Neal had hoped to deliver the first few in person, the ad explains, but the coronavirus pandemic meant he had to settle for a video conferencing with pizza recipients through the pizza box instead.

Speaking from a screen mounted on the inside of the box, O’Neal explained to a few lucky families that $1 from each pizza would be going toward community support, Covid-19 relief efforts and the fight against racial injustice.

Papa John's
The foundation supports charities like the Boys and Girls Clubs of America; the Association of American Colleges and Universities’ Truth, Racial Healing and Transformation Campus Centers; Bennett College, a historically black liberal arts college in Greensboro, N.C.; and Lean Into Louisville, an organization dedicated to confronting the history of discrimination and injustice in Papa John’s hometown of Louisville, Ky.

“From the Papa John’s Foundation to the efforts of our local franchisees and team members, Papa John’s is committed to supporting our communities, especially during this challenging time in our country,” said Rob Lynch, president and CEO of Papa John’s, in a statement.

Lynch added that the new campaign is a combination of “all the best ingredients for coming together in support of our neighbors—a Shaq-sized pizza, topped with extra ingredients, with a donation from every purchase going back into our communities.”

The brand is also rolling out an exclusive AR experience on Snapchat, which users can access by pointing their phone’s camera at the Shaq-a-Roni pizza box to reveal a 3D surprise. That’ll be followed up by more AR features on Papa John’s social channels next month.

O’Neal was brought on to help reinvent the Papa John’s brand last year after company’s founder, John Schnatter, was pushed out over racist comments. The former basketball star is now the pizza chain’s first Black board member, and signed an endorsement contract with Papa John’s worth $8.25 million. He’s also the partial owner of nine Papa John’s stores in Atlanta.