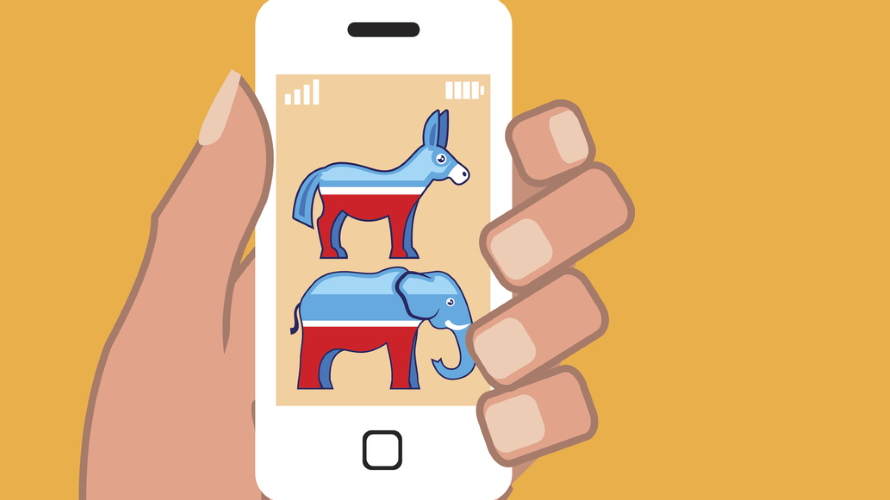 76% of Democrats had mentioned Black Lives Matter or #BlackLivesMatter since Jan. 1, 2015, versus just 10% of Republicans - Credit by anton_novik/iStock

The explosion in social media use in recent years has not bypassed Congress, as a new study from Pew Research Center found that the typical, median member currently tweets 81% more often than in 2016, has nearly three times as many followers and sees over six times as many retweets, while on Facebook, 48% more posts are produced and followers and shares are up roughly 50%. 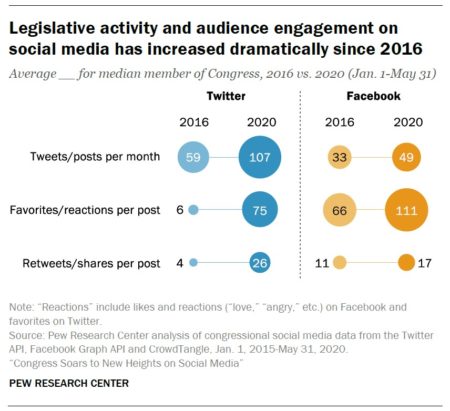 Pew Research Center
The think tank collected every tweet and Facebook post from every official and unofficial account maintained by every voting member of the House of Representatives and Senate between Jan. 1, 2015, and May 31 of this year, encompassing more than 3.3 million tweets from 1,362 accounts and almost 1.5 million Facebook posts from 1,388 accounts.

Researchers used the Facebook Graph API (application-programming interface), the Twitter API and CrowdTangle to download the posts, and analyzed them via a variety of methods, including training machine learning models.

Pew found that members of the 116th Congress as a whole maintain over 2,000 active official, campaign and personal accounts on Twitter and Facebook, not counting institutional accounts that periodically change hands, such as committee chair or leadership accounts.

They total nearly 250 million followers and produce over 100,000 tweets and Facebook posts in an average month, garnering tens of millions of favorites, reactions, retweets and shares.

Broken down by party, the typical Democrat has over 17,000 more followers on Twitter and tweets 130 times per month, versus 78 for Republicans, with Pew noting that the differences are much smaller on Facebook.

On the topic of engagement, the 10% of members with the most followers on Twitter and Facebook accounted for more than three-quarters of favorites, reactions, retweets and shares. 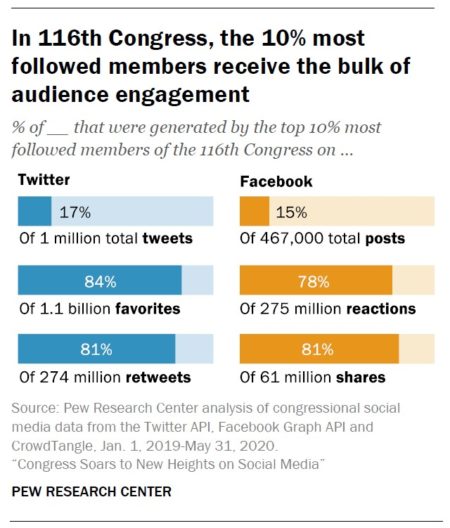 Certain words and phrases were practically adopted by parties, as Pew found that “equal pay” was used by 96% of Democrats, versus just 13% of Republicans, while “pro-growth” and “bureaucrats” were each used by 85% of Republicans, but by just 12% and 18%, respectively, of Democrats.

Pew wrote, “There have been striking ebbs and flows in the ways congressional social media use has unfolded over time during the study period. At the level of the typical lawmaker, engagement with posts from Democrats was at its peak during the early months of the Trump administration, and during heightened political moments such as the congressional sit-in to demand progress on gun control legislation on June 22, 2016. Meanwhile, recent boosts in Republican lawmaker engagement have coincided with events such as the Trump impeachment trial.”

Going into further detail, Pew found that the single greatest period of increased audience engagement for average Republican lawmakers occurred Dec. 17 and 18, 2019, when the House of Representatives impeached President Donald Trump, adding that favorites on tweets increased sevenfold compared with Dec. 16, retweets jumped eightfold, and reactions and shares for Facebook posts shot up 158% and 281%, respectively.

And when House Democrats staged their “no bill, no break” sit-in June 22, 2016, to demand progress on gun-control legislation, the typical Democrat’s average tweet saw over 12 times as many favorites and retweets as the day before, while reactions and shares of Facebook posts were up by more than eight times and 11 times, respectively.

Other events that caused engagement surges for Democrats included the Charlottesville protests in August 2017, the House passing the American Health Care Act in May 2017 and the U.S. Supreme Court upholding key components of the Affordable Care Act in June 2015.

Pew said the largest spike for Democrats during the first five months of this year happened during Trump’s State of the Union address Feb. 4.

The think tank also did a deep dive into usage of Black Lives Matter and #BlackLivesMatter by members of Congress.

Pew found that there were more total mentions of the phrase and the hashtag between May 25—when George Floyd was killed by a white police officer in Minneapolis during an arrest—and June 14 than in the five years prior.

According to Pew, 236 members of the 116th Congress, or 45%, mentioned Black Lives Matter on Twitter or Facebook at some point since Jan. 1, 2015, and roughly one-half of them did so for the first time during the three weeks following Floyd’s death.

Party lines were drawn here, as well, as 76% of Democrats had mentioned Black Lives Matter or #BlackLivesMatter since Jan. 1, 2015, with about one-half of them doing so for the first time during the three-week period mentioned above. Meanwhile, just 10% of Republicans had mentioned the phrase or hashtag at any point in the past five years.

Asian, Black and Hispanic legislators account for 21% of congressional seats but produced 43% of Black Lives Matter posts from May 25 through June 14, with Black members accounting for 25% of all posts mentioning the phrase or hashtag, despite holding just 10% of seats.

During that same time period, “police brutality” was mentioned by approximately three-quarters of Democrats but just 13% of Republicans, and there were similar trends for terms such as “Breonna Taylor” and “racial injustice.”

The gap was not as wide for mentions of Floyd, as 98% of Democrats did so, compared with 75% of Republicans.

So, what were Republicans posting about? “Assistance programs” (related to Covid-19), “happy birthday” (Trump’s birthday was June 14) and Memorial Day, according to Pew.

The think tank wrote, “These findings speak to the ways in which Democratic and Republican lawmakers have wittingly or unwittingly carved out different collective approaches to social media communications. Because Democrats post more content on these platforms and have a larger number of high-follower accounts, the bulk of all audience engagement with lawmakers on social media goes to Democrats as a collective. Republican lawmakers tend to be less active posters and have fewer of these highly successful accounts, but their posts tend to receive more audience engagement at the level of individual members.”