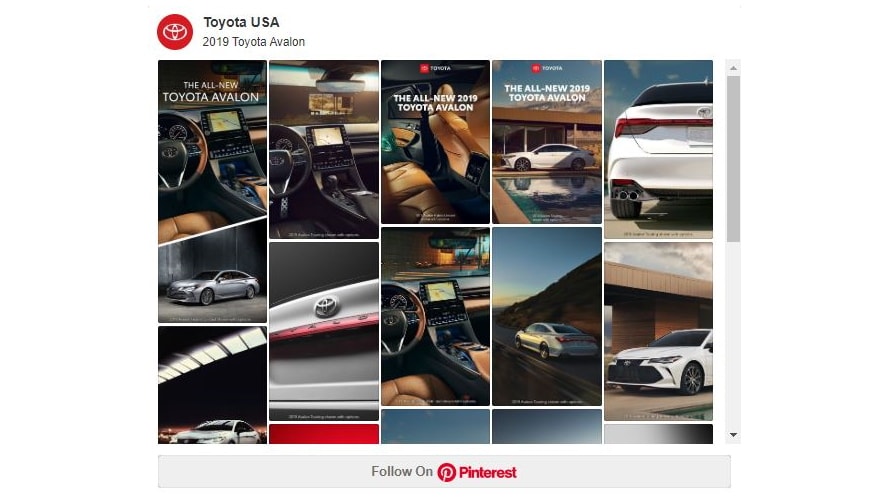 You might think that people use Pinterest to search for things like crafts, recipes and fashion tips, and not while shopping for cars. But according to a study by Oracle Data Cloud, you would be incorrect.

ODC analyzed aggregated new vehicle registration data using Polk Audience Measurement Solutions from IHS Markit, and it found that Pinterest users were 28% more likely to buy a new vehicle within the first 90 days of its release than people who don’t use Pinterest.

Pinterest said it reaches one-half of U.S. adults who plan to buy a car within the next six months, and more than 6 million people engage with car-related content on its platform, providing an opportunity for auto brands to reach an interested audience.

The company added that 57% of Pinners who Pin about automotive subjects weekly use Pinterest to discover auto-related products during their path to purchase, and 62% made purchases based on seeing content from brands on Pinterest.

Toyota North America used a promoted video campaign on Pinterest when it debuted its new Avalon, and it reached an average view-through rate of 53% for those videos.

Nancy Inouye, national media manager for the automaker, said in a Pinterest blog post, “The strategic mix of various ad types and visually impactful creative made this the strongest-performing Pinterest campaign to date. We were also thrilled with the higher-than-benchmark results.”

ODC group vice president of brand partnerships Joe Kyriakoza added in the blog post, “People who use Pinterest tend to be trailblazers for the latest products. We’ve seen that come through in multiple rounds of research over the years, whether it’s a study about grocery shopping or, in this case, buying new cars.”