Telling individual stories in the face of unyielding mass casualty 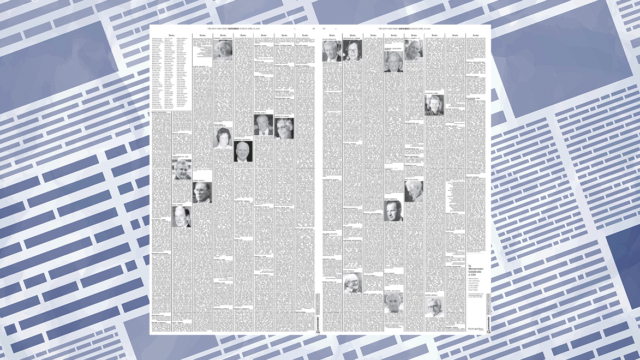 Emilia Pontarelli, the matriarch of Tony’s Italian Deli, an institution in Chicago’s Edison Park neighborhood, was 93 when she died last month of Covid-19.

But her life had many twists and turns before then: As a young girl in Italy, Pontarelli challenged a Nazi soldier who stole her pet goat for dinner. In her 90s, Pontarelli arm wrestled her son-in-law to show how strong she still was.

Pontarelli’s story, how she lived and died—her last words to her family were communicated over FaceTime—was told by a woman who had more than once shopped at Tony’s.

“I knew that this was a place that thousands of people rely on for good food,” said Maureen O’Donnell, the obituary writer for the Chicago Sun-Times. “What I didn’t know was she was the kitchen wizard behind the recipes—that the things I was buying belonged to a woman I was ultimately going to write about.”

O’Donnell took readers into the last days of Pontarelli’s life, detailing what happened when she got sick: how the priest delivered his benediction by proxy, how Emilia eventually lost her energy to speak. These details tell an intimate story of the pandemic: how people ail, how they die, how their families cope even as the crisis continues.

O’Donnell isn’t alone in showing this side of the coronavirus, as America’s obituary writers go to work in newsrooms across the country to provide accurate accounts of individuals’ lives. The journalists who do this work are seen, and see themselves, as storytellers able to convey ideas of community and shared humanity. It’s a crucial burden right now, at a time when we are physically separated from one another—even the ones we love.

“Obituaries are a history of a community, and they tell the story of all the threads that tie us together—and they also tell how we’re all connected,” O’Donnell said. “An obituary can kind of knit a community together, whether it’s a small community newspaper or a big city newspaper. You’re sharing a history of the town.”

As the coronavirus pandemic ravages the world, the casualties are mounting, crowding the pages of print newspapers. There are only so many obituary writers and far too many dead, so not everyone gets a reported obituary. Everyone can, however, pay to put a loved one’s name in the paper. On Sunday, The Boston Globe printed 16 pages of death notices—which are paid obituaries, written by families or funeral homes and submitted to the newspaper. The Hartford Courant printed 12 pages of notices in one day; The Star-Ledger in New Jersey printed nine pages; New Orleans’ Times-Picayune and The New Haven Register each printed eight.

“In 40 years of being a journalist, I’ve never seen anything like this,” O’Donnell said.

In recent weeks, news outlets of all sizes have been overwhelmed by the body count. From the three-person community newspaper to the obituary desk of The New York Times, news outlets are trying to bring humanity back to a crisis all too often defined by numbers.

Obituaries are a long-standing tradition. Humans have been publicly recording deaths at least since ancient Rome: The Acta Diurna—stone message boards that were posted daily—served as a place to announce births, marriages and deaths. In 17th-century Britain, newsbooks—a predecessor to the modern newspaper—announced the deaths of aristocrats and other famous individuals.

Death notices and obituaries became a sizable part of American media culture in the early 1800s, accelerated by the advent of the penny press, cheap newspapers that more closely covered local happenings, Janice Hume writes in her book Obituaries in American Culture. In the 1850s, the introduction of the telegraph hastened the reporting process and gave newspapers the ability to cover deaths in far-off places.

@ScottNover
Scott Nover is a platforms reporter at Adweek, covering social media companies and their influence.