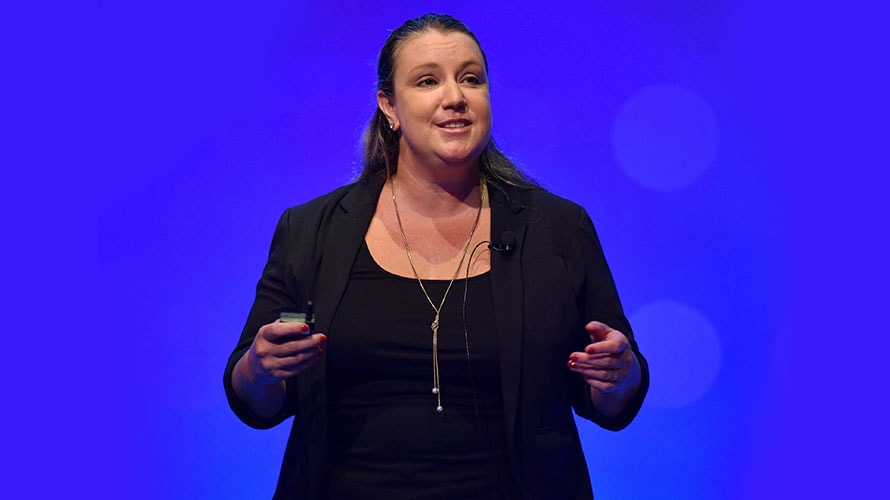 When Los Angeles-based Snap Inc. began the search to replace Chief Strategy Officer Imran Khan, who left in November to start his own venture capital firm, the 8-year-old social platform/digital camera company was navigating growing pains both self-inflicted and market-driven.

The company was facing an exodus of top-level executives, having lost nearly a dozen since the middle of 2017. Meanwhile, it had struggled to grow its user base to meet Wall Street expectations—while fighting off comparisons to faster-growing social platforms like Facebook, Google and even Twitter. And then CEO Evan Spiegel met Jeremi Gorman.

At the time, Gorman was overseeing advertising sales for Amazon, helping the e-commerce giant grow its ads business from $4 billion to $10 billion between 2017 and 2019, and a 20-year industry veteran, having spent the last six at the world’s largest company. In other words, she knows her way around a sales team.

Spiegel was deep in the interview process when a friend suggested he talk to Gorman, touting her as someone able to scale an advertising business. After their first meeting in Snap’s office in Los Angeles, Gorman sent Spiegel a list of ways Snap should change. (He said Gorman pointed out that Snap shouldn’t try and scale both self-serve and larger brand advertisers at the same time, for example.) Not only did Spiegel hire Gorman in October; he also decided to split the role into two: chief business officer and chief strategy officer.

Snap isn’t the only tech company to reevaluate its upper ranks. Facebook and Google both went through their own struggles before bringing seasoned veterans on board to win the trust of both Wall Street and Madison Avenue. For Facebook, that meant stealing Sheryl Sandberg from Google and Carolyn Everson from Microsoft; for Google’s earlier days, that meant signing Eric Schmidt. Like those companies, Snap’s move signals that it too is growing up.

Advertising, we know, is a personal, if not personable, business. As part of the company’s overhaul of its ad sales structure, a new team of executives, led by Gorman, is being deployed to rub elbows with marketers and agencies in ways that, perhaps unsurprisingly, mimic a publisher’s blueprint, shifting a sales-strategy focus away from regional to a set of nine different verticals based on industry.

Gorman said the company is also making other changes to its ads business, such as dedicating a team to focus on the six largest ad agencies, another to focus on emerging brands and a third intent on teaching advertisers about Snap’s self-serve programmatic buying.

Over the past year, Snap’s ads business has shifted to focus increasingly on performance-based metrics rather than reach. But in an effort to scale the company’s self-service ads business—another move straight out of the social-platform playbook—Spiegel said the focus ended up leaving larger brand advertisers to languish. It’s an issue Gorman pointed out during the interview process, he noted.

“We are so grateful to benefit from Jeremi’s brilliance, experience and positivity,” he said. “Jeremi hit the ground running and took decisive action that brought our team together and inspired everyone to grow our business.”

Gorman joined Spiegel on the company’s fourth-quarter earning’s call to talk about the ads business over the past three months and where things are heading in 2019. The move was similar to what others have done, such as when Twitter introduced former chief operating officer Adam Bain, or Facebook brought on Caroline Everson, or Google brought on Tim Armstrong. Snap is betting that Gorman will follow in her peers’ footsteps, helping a struggling ads business turn around. However, there’s still a question as to whether Gorman can direct change from the inside.

One analyst put it this way: “How can there be an adult in the room if nobody can tell Spiegel what to do?”

Others seem to think Gorman’s already making an impact. Just this week, a longtime Snapchat skeptic at BTIG upgraded Snap’s stock to “buy,” prompting shares to rise 10 percent. The gain is thanks in part to a better discovery section, better user stickiness—and better management.

“With a significant number of senior executive hires over the past few months and a clearer strategic road map, we can feel the improved morale and momentum internally,” wrote BTIG media and tech analyst Richard Greenfield. “We also have heard repeatedly positive industry feedback on Jeremi Gorman, Snapchat’s chief business officer, with brands/advertisers viewing it as a meaningful step up in management quality. Still a lot of work for Snapchat to do, but we are encouraged by the direction.”