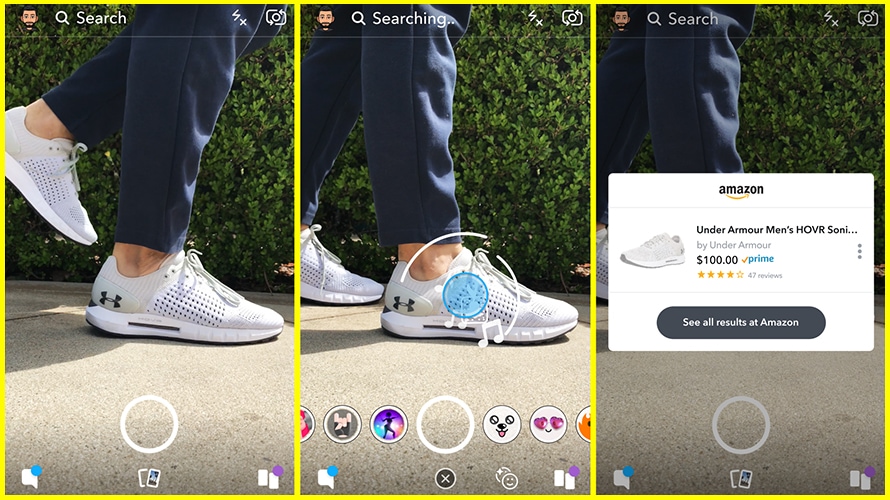 The idea is to turn the camera into a type of cursor. - Credit by Snapchat

Snapchat is rolling out a new tool to let users identify objects in real life and then buy them on Amazon.

The companies are announcing a partnership for a “visual search” feature, which will let users point Snapchat’s camera app at items to find them within the ecommerce giant’s inventory.

The idea, according to Snap, is to turn the camera into a type of cursor that makes it easier for identifying products and buying them on the spot. When the app recognizes an item or a barcode, an Amazon card will appear within Snapchat that will then lead to Amazon’s app or website.

While the tool debuts today, only a small number of users will see it at first. The company didn’t say when it might expand the test to a broader user base. (It’s also unclear how many of Amazon’s products are part of the test, but the first to use the technology include Under Armour for its HOVR shoe and CoverGirl for its clean matte liquid makeup.)

The news is just one of several ecommerce updates added by Snapchat this year. In June, the company introduced “Shoppable Snap” ads, which followed up the app’s shippable augmented reality lenses earlier in the year.

While visual search by itself isn’t new, the weight of Amazon as a brand—along with its massive inventory of products—opens up new territory for using Snapchat at a time when user growth is declining. And in the ongoing competition between Snap and its main rival Facebook, a deal with Amazon is a boost to Snap’s ecommerce plans.