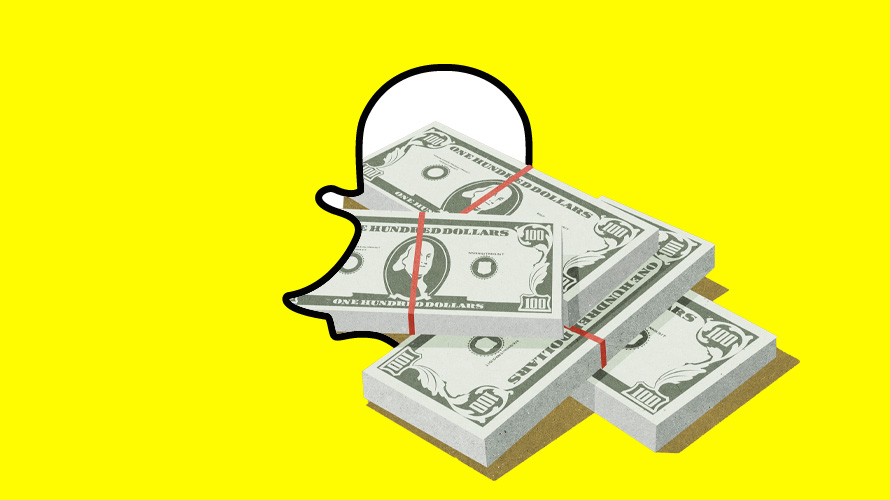 Snapchat finished the first quarter of 2020 with 229 million average daily active users, up 20% compared with the year-ago period, and the growth was across the board.

Parent company Snap Inc. said in its earnings release that DAUs rose versus both the first quarter of 2019 and the fourth quarter of 2019 in North America, Europe and the rest of the world, and on both iOS and Android, with an average of 4 billion Snaps created each day during the recently concluded period. 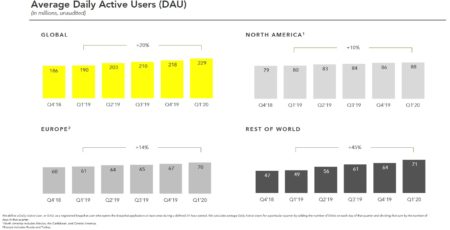 Chief business officer Jeremi Gorman said in her prepared remarks, “The global outbreak of Covid-19 has dramatically shifted the ways brands are thinking about reaching new audiences. While friends and families are physically separated from each other and their regular routines, Snapchatters are coming together virtually to maintain their friendships through visual communication, self-expression and storytelling.”

Chief financial officer Derek Andersen downplayed the effects of the coronavirus pandemic on Snapchat’s DAU numbers, saying in his prepared remarks, “While we observed higher engagement in the final weeks of the quarter, as many in our community sought to stay connected and entertained from home, this had little impact on our first-quarter result, as we calculate this metric using a daily average.”

On the financial side, Snap Inc. posted its first-ever quarter of positive operating cash flow, tallying $6 million and marking a year-over-year improvement of $72 million.

Co-founder and CEO Evan Spiegel said in his prepared remarks, “While many advertising budgets declined due to Covid-19, we experienced high revenue growth rates in the first two months of the quarter, which offset our lower growth in March. These high growth rates in the beginning of the quarter reflect our investments in our audience, ad products and optimization and give us confidence in our ability to grow revenue over the long term.”

Snap said money committed from advertisers via upfronts doubled in 2020 compared with 2019, adding that direct-response advertising has nearly doubled its share of the company’s total revenue over the past two years, now representing more than one-half of that total.

Spiegel said, “In the short-term, we are shifting sales resources and pulling forward some investments in direct-response to better serve the advertisers who are trying to reach our audience during this time. For example, we can help movie studios pivot to digital releases by supporting them with a suite of products designed to track titles over a dynamic and flexible release window.”

Gorman added, “We had the opportunity to work closely with Adidas to adapt a new campaign for Snapchat in response to the growing number of stay-at-home orders moving through Europe. With this in mind, Adidas booked a national filter across the U.K. and Germany. They complemented this with audience filters and commercials across other markets to encourage Snapchatters to stay home and to offer them creative, fit and fun ways to stay active during this period. Our team worked quickly with Adidas to help create their #HomeTeam campaign within 24 hours, with the filter being viewed more than 14 million times across the U.K. and Germany. Our large audience, creative formats and advanced measurement tools provide a significant opportunity for brands such as Adidas to reach Snapchatters during these challenging and unprecedented times.”

She also mentioned the company’s hiring of Hulu senior vice president of advertising sales Peter Naylor, who will join Snap in early May as vp of the Americas.

The company said more than 60 shows reached monthly audiences of 10 million or more viewers during the first quarter, up from 50 in the fourth quarter of 2019, and it singled out one of its new Snap Originals, Nikita Unfiltered, saying that more than 20 million users have watched it since its debut last month.

Spiegel said, “In addition to news and information, Discover now includes programming that celebrates the doctors, teachers, store employees and others in our community who are sharing their experiences from the front lines. This includes uplifting content like Will From Home, in which Will Smith shares his own shelter-in-place experience along with his friends, which garnered over 15 million viewers in its first three episodes.”

The company said over 75% of its DAUs engage with augmented reality every day on average, and it provided some data on its Lens Studio tools.

Spiegel said, “Additionally, as people turn to videoconferencing and livestreaming to work and hang out together, we have seen more than a 30 times increase in the daily downloads of Snap Camera, a desktop app that allows people to add our suite of lenses to whichever videoconferencing service they use.”

Snapchat added more than 120 partner app integrations with its Snap Kit during the quarter, and the number of Snapchatters using Snap Kit on a monthly basis was up 75% from the fourth quarter of 2019.

Finally, the company provided more color about the coronavirus pandemic.

Snap said communications with friends via its platform was up by more than 30% in the last week of March versus the last week of January, and that number reached over 50% in more heavily impacted areas.

The app rolled out a lens in 11 languages and 33 countries for World Health Day to raise money for the Covid-19 Solidarity Response Fund, and it has published over 700 editions on Discovery featuring Covid-19 coverage from content partners, in-house news teams and agencies like the Centers for Disease Control and Prevention and the World Health Organization.

Spiegel said, “We closed our first office in January and continued to close offices as Covid-19 spread around the globe. Our team has rallied around maintaining business continuity during this critical time, and I am in awe of how quickly our team adapted to the circumstances and continued to execute against our ongoing opportunities. We are monitoring the current situation daily and are working toward a best-case scenario for a rapid recovery, while also preparing for a worst-case scenario.”

The company’s financial performance during the first quarter of 2020 drew positive reactions from the industry.

eMarketer principal analyst Debra Aho Williamson said, “As we expected, Snapchat showed strong momentum in usage in the first quarter. Some of the boost likely came in March, when the coronavirus pandemic forced millions of people around the world to shelter at home … Snap’s revenue picture was much brighter than many analysts expected, considering that the global pandemic hit ad budgets hard toward the end of the quarter. If advertisers did cut budgets for Snapchat advertising, they may not have done so in large numbers before the end of the quarter. I believe the second quarter will be a much more important quarter to watch.”

Socialbakers CEO Yuval Ben-Itzhak added, “Snap’s strong first-quarter earnings come as a pleasant surprise. As the U.S. market really only saw the impact of the Covid-19 pandemic late during the first quarter, Snap is likely not to have seen such a great impact on its ad revenue. It will be the second quarter when they feel the true impact on their business.”

He continued, “Snap isn’t usually seen as the first option for brands to spend their big ad budgets, as it’s perceived as more of an experimental platform. As a result, the platform is more vulnerable to budget cuts than other social media platforms. Given the decline in ad spend we are seeing across social media platforms in the wake of the coronavirus crisis, Snap needs to continue to focus on maintaining its user base while attracting ad spend in what’s proving to be a difficult economy.”