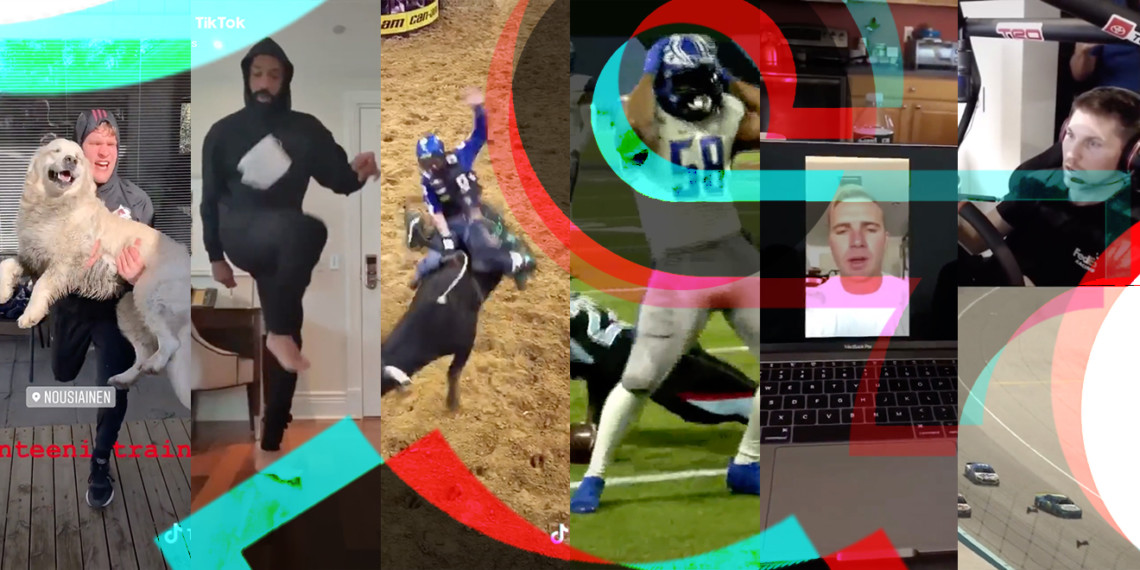 Leagues and athletes are relying on social media more than ever to connect with fans and using TikTok to make the best of a bad situation. - Credit by Photo Illustration: Dianna McDougall; Sources: TikTok

“And at guard … in his rookie season … from Murray State University … Ja Morant!”

Morant, like so many professional athletes, is just making the best of a bad situation. The NBA season, along with that of every major sports league, is postponed indefinitely due to the novel coronavirus outbreak.

With their jobs on hold, athletes are relying on social media to connect with fans. In addition to Morant, TikTok’s new entrants in this time of social isolation include Los Angeles Angels outfielder Mike Trout, Philadelphia 76ers guard Matisse Thybulle and Chelsea F.C. midfielder Christian Pulisic, joining a growing list of prominent athletes like LeBron James, Tom Brady and JuJu Smith-Schuster who have been on the platform for some time now.

Long before the pandemic, the major American sports leagues started cultivating their presence on TikTok, the emerging social video app owned by the Chinese firm ByteDance. Now, many of those leagues, along with their teams and athletes, are rerouting their social media strategies and rethinking TikTok during an outbreak that promises to render their sports dormant for the foreseeable future. As critic Amanda Hess wrote in The New York Times, “the visual grammar of TikTok was developed by teenagers messing around alone in their childhood bedrooms,” so during the coronavirus crisis, the platform feels “oddly unchanged.”

During this time of physical isolation for players and fans, athletes, their jobs rendered impossible by an invisible plague, are acting a lot like those teenagers, shedding nervous energy and, for now, connecting with fans from the safety of their own homes. The leagues, in turn, are playing the role of stage parents, keeping their wards busy during an inexplicably weird moment in time.

The NBA season was cancelled after Utah Jazz center Rudy Gobert tested positive for COVID-19, the disease caused by the coronavirus, just two days after he mocked the league’s precautions by touching every reporter’s microphone and recorder at the end of a press conference. Just a few days ago, Gobert recorded a video urging fans to wash their hands and avoid unnecessary contact with others. “I wish I would’ve taken this thing more seriously, and I hope everyone else is going to do so because we can do it together,” Gobert said.

That too, you can find on TikTok.

A message from Magic Johnson

A new platform for sports

Without sports on television, sports leagues are just brands, and athletes are just social media influencers.

Despite the reliance on their actual sports for highlights and news, the leagues are fairly well prepared to handle their cadres of stay-at-home athletes. In interviews with Adweek in the weeks before the outbreak shut down much of the United States, executives at most of the major sports leagues emphasized the importance of getting away from highlights on social media and focusing on human-interest stories.

“The human aspects of human stories are the ones that always perform best,” said Sean Dennison, social media director of the NHL. “And TikTok really lends itself well to that.” The NHL has a go-to philosophy for social media internally known as “humans over highlights,” favoring funny, interesting or heartwarming stories that resonate with everyone—even people who don’t watch or care about hockey. Some of the league’s most popular TikToks involve players giving pucks to fans. While more highlight-focused content often gets hundreds of thousands of views, the puck exchanges consistently rake in millions.

The NFL calls its version of this strategy “helmets off.” The league organizes its social media content, according to Ian Trombetta, svp of social and influencer marketing for the NFL, around four verticals: video games, music, fitness and fashion.

“Those actually mirror our players and their interests as well,” Trombetta said.

And the lifestyle push helps leagues expand their reach beyond their established fan base. The NFL brought Charli D’Amelio, the second most popular creator on TikTok with 41 million followers, and her TikTok-famous family to the Super Bowl to create content around the game, making videos with halftime show performer Jennifer Lopez as well as Jackson Mahomes, brother of Chiefs quarterback Patrick Mahomes and a popular presence on TikTok.

“For us, it was great because here we are reaching a more casual audience, a younger audience and building that interest in the Super Bowl and the halftime show,” Trombetta said. “It just really worked for everyone involved.”

Soooo much fun doing the ##JLoSuperBowlChallenge with @charlidamelio!!!!! See you all tomorrow at ##SuperBowlLIV ????❤️

With 10.1 million followers, the NBA isn’t just the most followed sports league on TikTok—it’s the most followed brand on the platform. The NBA TikTok is full of highlights but also relies heavily on in-arena entertainment that fans tuning into a live broadcast might not see.

“Our mascot content performs best,” said Bob Carney, svp, social and digital content at the NBA. “We even created the hashtag #MascotMonday to highlight mascot content on a regular basis. The hashtag is home to some of our more light-hearted content such as pregame dances, funny bloopers and many other moments that usually can only be seen in-arena.” (Chicago Bulls mascot Benny the Bull alone has 2.2 million TikTok followers.)

(Adweek’s interview with Major League Baseball, which was scheduled for what turned out to be the day after the baseball season was postponed, never came to fruition. After the MLB season was delayed, the league declined to comment for this piece.) 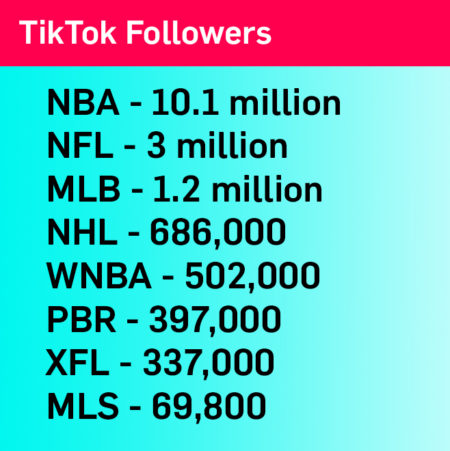