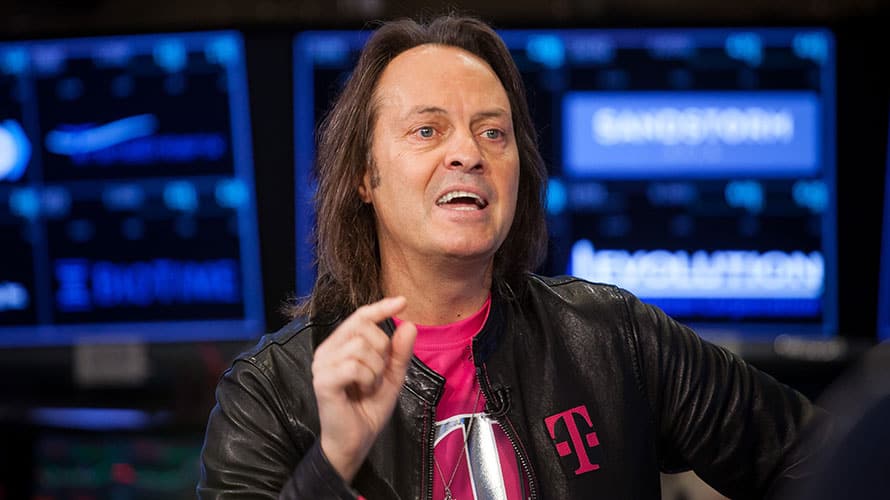 Sprint and T-Mobile are calling on regulators to approve their merger in the interest of better 5G service—and America.

The carriers argued in a 700-page Federal Communication Commission filing this week that their joint resources would allow them to more quickly build a robust 5G network, benefiting consumers and helping the country catch up to China and South Korea in the global race to implement the new generation of wireless service. Antitrust authorities will decide if those supposed benefits are enough to outweigh any potential ill effects of reducing the number of major wireless carriers to just three big companies.

The advent of 5G service is expected to boost data transfer speeds by 50 to 100 times those of current networks and lay the foundation for a sprawling ecosystem of connected devices and tech infrastructure projects. But studies show that the United States is trailing overseas competitors in 5G implementation—a race that could decide whether Silicon Valley or Chinese tech giants like Alibaba and Tencent will control the market for new 5G-enabled technology.

“If we don’t take decisive, positive action, we risk ceding global leadership in both 5G and the entire next wave of technology to a country other than America,” T-Mobile CEO John Legere said in a blog post announcing the filing.

First agreed upon in April, the marriage of T-Mobile and Sprint would bring their combined customer base to around 127 million—just behind Verizon’s 151 million and AT&T’s 144 million, according to Strategy Analytics.

But the real power of the deal will stem from each carrier’s respective broadband spectrum rights (the regulated wavelengths at which each wireless company is allowed to transmit data) according to Information Technology and Innovation Foundation (IFIT) telecom policy analyst Doug Brake.

Verizon and AT&T are building their 5G infrastructures on a short-range wave spectrum that requires more physical equipment and works best in urban areas. But the deal would give T-Mobile and Sprint a potent mix of bandwidths that would allow them to build a more expansive 5G network in a shorter time, Brake said.

“It would allow them to leapfrog over the capabilities of both AT&T and Verizon,” Brake said.

Despite recent strong growth, however, neither company currently has the scale to build out 5G in a timely manner on their own, according to Gartner analyst Mark Hung. The resources required to complete the transition are expected to dwarf what was needed for the previous upgrade to 4G, he said.

“The transition to 5G will be very resource-intensive, from both a technology and financial perspective,” Hung said in an email. “It will be a significant undertaking for any mobile operator, even those who are on a solid financial footing. For the smaller players, the move to 5G will either take longer or require a pooling of resources.”

American regulators account for one criterion when determining whether or not a potential deal violates competition laws: net consumer welfare. That cost-benefit equation is broad enough to incorporate any number of factors, including arguments about the country’s relative economic standing and the boon of a broader 5G network.

Still, despite a recent wave of consolidation in the media and telecom industry, analysts say the two carriers will face an uphill battle pleading their case to the FCC and the Justice Department.

“I generally believe that the company’s claims around 5G will be met with a great deal of skepticism from an antitrust perspective,” said Jefferies analyst Scott Goldman. “While there is no question the combination could make for a more robust 5G network, I suspect regulators will look closely at all the 5G public statements made by T-Mobile and Sprint as well as the respective internal 5G plans in making their determination.”

The recent relative success that each company has experienced could also work against them.

“The timing’s kind of poor because T-Mobile has been dominating postpaid net adds for many quarters, and Sprint has actually turned a corner where they’ve been positive,” said Counterpoint Research telecom analyst Jeff Fieldhack. “They’re a bit stronger today than they were two years ago.”

The companies do have some points working in their favor, like a generally business-friendly administration that recently approved AT&T’s blockbuster acquisition of Time Warner despite concerns about vertical integration.

Their argument about America’s global position could also resonate with a government that recently talked of nationalizing 5G tech to compete with China. President Donald Trump even blocked Singapore-based Broadcom’s proposed takeover of U.S. telecom equipment maker Qualcomm on “national security” grounds, widely interpreted to mean that it would hurt America’s place in the 5G race.

“They’re going to try to really cater to the administration with … how important it is for the nation to lead other countries in 5G,” Fieldhack said. “I still don’t think that will be first and foremost in the eyes of the regulators.”

Brake said it could ultimately come down to how authorities decide to define the 5G market.

“If you see 5G as a true convergence bringing together broadband, media and video under one umbrella, then you see carriers competing with cable, competing with traditional video products,” Brake said. “But if you look at it as just wireless players, then you have just a four-to-three merger.”