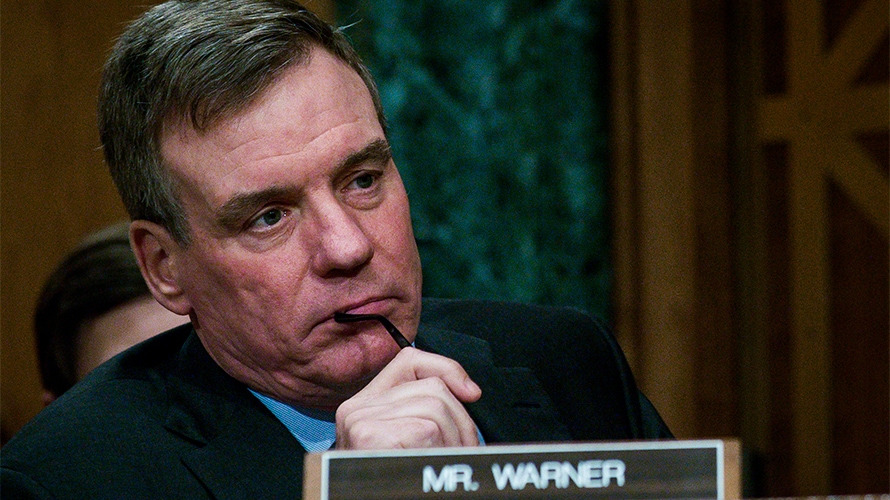 On Wednesday, Facebook’s Sheryl Sandberg and Twitter’s Jack Dorsey will sit in front of the 15 members of the Senate Intelligence Committee to discuss their companies’ role in the 2016 election and their efforts to prevent the dissemination of misinformation in November’s midterm election. The committee also invited Google, but instead of sending a C-level executive, the search giant offered to send its lawyer, Kent Walker. The committee said thanks, but no thanks. If you can’t send someone who can be held accountable, don’t send anyone at all.

It’s with this backdrop that we spoke to the committee’s vice chairman and top Democrat, Senator Mark Warner (D-Va.) on Thursday. We explored three main themes: the hearing, GDPR, and the new media wars of the telecom industry, from which Sen. Warner has received $805,894 over his career.

Adweek: You’ve got your hearings coming up on Wednesday, and I wanted to get your quick take of Google. Are they taking this seriously?

Sen. Warner: They’re not taking it seriously enough to send a senior executive. And this is no disrespect to Kent Walker, but we had those lawyers back in November and I think that most of the attention has been on Facebook and Twitter in the past, but there are issues around YouTube. You know, obviously I don’t agree with President Trump’s critiques of search, but there are other concerns.

Google has not answered a lot of bipartisan questions that a number of senators were raising: what are you doing building a search engine for Chinese users that’s going to allow Chinese government censorship?

I guess they decided, rather, to have an empty chair for the world to see than to actually step up and be part of the solution. We tried to convey to them this is not going to be a gotcha hearing. This is not going to be, ‘let’s look what happened when we missed items in 2016.’

This is going to be a hearing that focuses on:

Now, we know that’s easier to say than to do. But I’d love to hear the response on something like that. 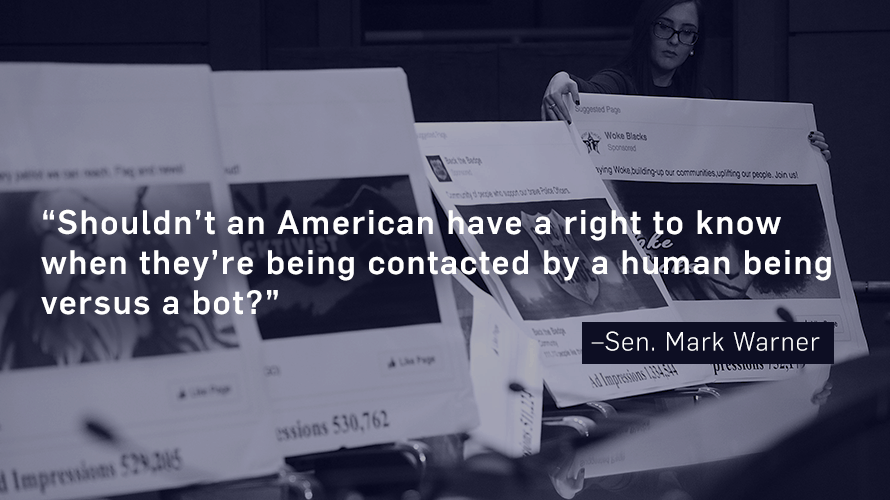 I’d also like to hear, and the other area at least I want to get into, and this is the next iteration of where the debate’s headed is, if you look back at 2016 campaign, the Russian active measures broke into two categories.

There were cyber activities, where they went after Hillary and [John] Podesta’s emails and weaponized information, and when they attacked 21 states’ electoral systems.

And then there was a misinformation/disinformation campaign where they created fake accounts on Facebook and Twitter and others. What I’m trying to look ahead and, frankly, this is an area that I think is also a problem with digital advertising and a problem in the markets—what happens when you combine a cyber attack with a misinformation attack?

So [you are] going to open up a message, if it’s got your personal financial information or other data in there, that says, ‘Gosh, this person must know who I am.’

And then you open that message, and what I’m really afraid of is not simply getting some fake account with a written message, but [being] greeted by a livestream video of a political figure or a business figure that’s saying whatever. But that fake video is being created by the same guy who might be the cyber hacker and in many ways the ramifications on that, because of what it would create in real-time activity, might even be more problematic for the markets than even for politics. 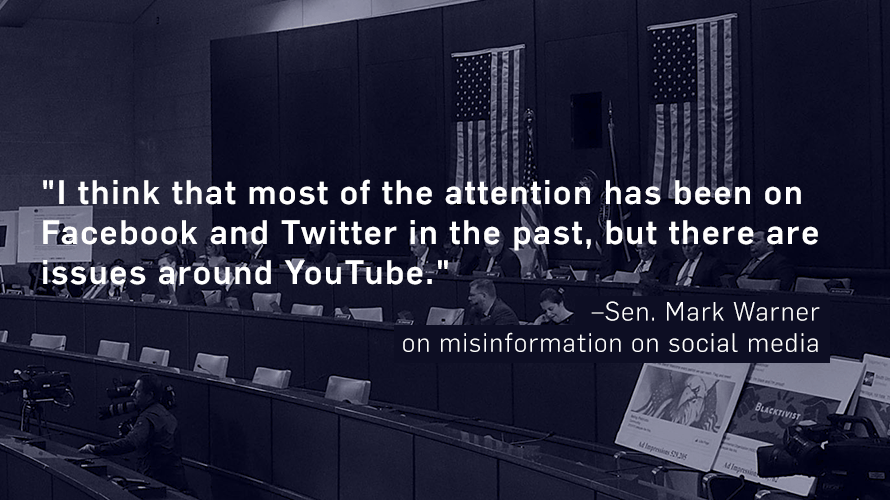 So how does this square with the Honest Ads Act?
When we started this, and I was just learning this, I thought that maybe the biggest problem was the nondisclosure around political advertising. The thing we’ve learned: paid political advertising is a tiny, tiny piece. The challenge here is not paid political advertising. Although there should be disclosure, the problem is somebody creating a fake account, creating a set of followers and then magnifying those followers with bot traffic and turning an account that is about Texas football into a political account and it all being driven by somebody who says they’re from Lubbock, Texas, but it’s actually some Russian agent out in St. Petersburg.

A lot of this is predicated on data collection. So with regulations on data and data collection, especially for those that rely on user consent, it can really only work when the collector, in this case, let’s say Google or Facebook intends to follow the rules. So how are you able to enforce these limitations on what can and can’t be collected?

Respectfully, I will disagree with your premise. I will say that manipulation on data collection is one area and obviously Cambridge Analytica is an example of that. But what are the things that people have talked about—and it might be a good idea, but I’d love to hear the reaction: should you only have first person? Can you only grant use of your data to one party? So should you have an ability to prohibit all companies without subsequent expressive approval, sharing your data with any other entity? And so there are certain limitations on data collection that ought to be discussed.

The data collection issues that are present grapple with the problem of the earlier example I gave of misinformation and cyber. If somebody has broken in and got 150 million Americans personal financial data from Equifax and then they’re using a fake identity to convey a message, that’s not, in many ways, necessarily the social media platforms’ fault because they didn’t authorize the collection today but somebody stole them. 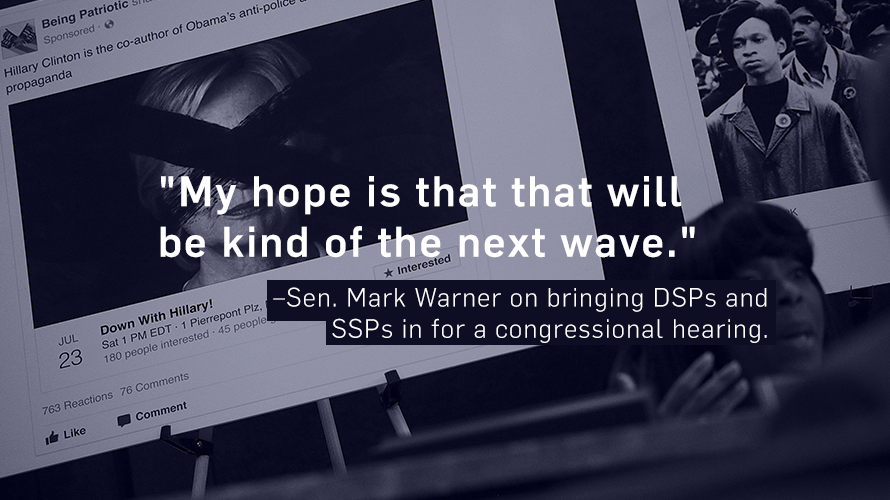 So then why not have some of these SSPs [supply-side platforms] and DSPs sit alongside Facebook and Google?

I think that’s a very fair question. My hope is that that will be kind of the next wave. And when we had the hearing back on Aug. 1, [Graphika CEO] John Kelly was saying—and it never got as much attention as I thought, but it was like to me, holy heck—the volume of traffic on the far left and far right in this country, that it’s 25- to 30-to-one bots or foreign entities (not all the bots are created by foreign entities but bots or foreign fake accounts) over actual Americans.

And that’s stunning because if that much additional traffic is created by not Americans, that would mean that many of these stories that may be appearing on your news feed are not because that many Americans actually clicked on them, but [because] somebody is manipulating the system. And that goes into all of the questions about digital advertising and the manipulation in digital advertising. I know there’s been some discussions there, but I think it’s hugely problematic as well.

One of the things that comes up a lot is GDPR. Should there be a federal GDPR-like law?

I think there are parts of GDPR that go too far.

I think there are parts of GDPR that I don’t think would be right for our country. I’m going to be anxious to see how that continues to play out. You know what we’re three months in, and this is why, when I did my paper there were a lot of techies who said, ‘This is an interesting idea’; and then you have The Wall Street Journal saying, ‘This could be the end of American innovation.’

I have no interest in regulating the internet. I got no interest in slowing American innovation, particularly because since it’s a global market, you don’t want to replace some of the American companies with Alibaba, Baidu, and Tencent.

So I’m trying to say: What are the appropriate guard rules, and that’s why I’ve tried to put my paper into authentication and misrepresentation—got to find a better word in there—privacy and competition, because there’s other problems too that says, some of the companies have got so much aggregated data, how does anybody ever break in?

And I’m interested in some of the data portability issues, for example. But data portability without interoperability doesn’t completely solve the problem. But that’s [where] I’m trying to move all this debate. How do we move the debate to things that will allow innovation, keep Americans’ trust in what they’re seeing, or at least give them a caution sign that says, ‘Hey, before you believe this or before you accept that as a human being, you should maybe at least be aware of this kind of factoid.’

A lot of this focuses on Facebook and Google; and Twitter, to an extent. One of the things that I’ve been really curious about, especially when it comes to all of these issues from privacy and data and distribution of misinformation, is the underpinning technology of the telecoms. You’ve got AT&T and Verizon building out these massive media companies. It seems that the telecom industry is starting to inch toward the platforms. And I’m curious about how, when thinking about regulation, can you make sure that what you’re trying to do with Facebook and Google doesn’t get co-opted by telecoms that have significant lobbying power?

That’s a great question and it’s one you could argue that has been around the question of the net neutrality battle.

But the idea is that what everybody tries to act like they’re just providing, [is] the equivalent of—and I’m an old telephone guy—dumb pipes; and [the telecom is saying,] ‘We’re the common carrier’, or the platform is saying, ‘We’re just the public square.’

Increasingly, as you see that as 50 percent of Americans get their news from Facebook and you do look at some of the algorithms that drive—I don’t think they [platforms] are biased of conservative or liberal. I mean, I think they’re biased towards, if you continue to do conservative news questions, you’re just going to get more of the same and countervailing view. And the same thing on the left.

I need to think more about this question you’ve got on telecoms versus social media platforms.

One of the differences, though is that AT&T and Verizon are controlling the production, distribution and exhibition of content.

All these large enterprises are merging distribution and content in ways that I don’t think we’ve fully thought through. I don’t know the right answer, but I’m hoping to ask the right questions.

Well to that end, based off of the previous hearings with Facebook, how do you get your colleagues who don’t have that background to understand this stuff?

[laughs] Let me try to be politically correct in my answer. What I’m trying to say to people for this hearing is it’s not going to be about the Internet 101. I think the committee has had a number of hearings. We’ve got a number of briefings. I hope we’re going to be moving the debate forward about how we get to some solutions. But your question is a valid one and we’ll have to do the follow up later.