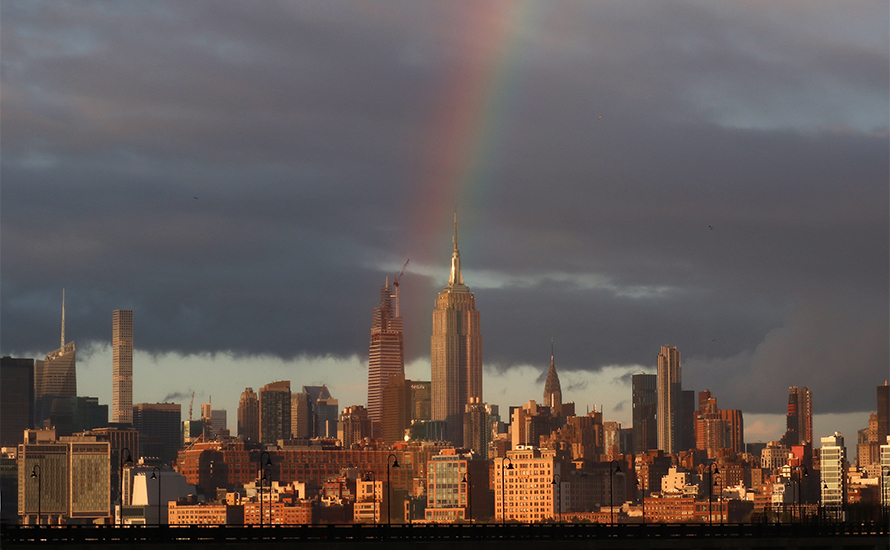 A rainbow was spotted over Manhattan Monday, April 13 after a day of strong storms. - Credit by Gary Hershorn — Getty Images

Every day, in the Age of Coronavirus, is Tuesday.

Mondays give us the blues. Wednesday is Hump Day. Thursday is the pre-weekend, leading into Friday, Saturday and Sunday. Tuesday has no flavor, no personality, no meaning. The only thing it has going for it is that it’s one day closer to the weekend. And that it’s not Monday. Imagine the claim to fame as not a positive, but a non-negative.

With society ground to a halt, each of us is living our own version of Groundhog Day—except when you get the word that you’ve been laid off or furloughed.

On Tuesday, many in media were on one of two ends of a hard conversation: You were either told your job was no longer, or you had to inform someone that their life is getting flipped upside down. No matter which end of the conversation you were on, it’s tough.

Fortune reportedly laid off 35 people. The company, like many media companies, has been hit hard from loss of revenue on the advertising and events fronts. It’s a particularly cruel twist as the 90-year-old company, which was bought in 2018 by billionaire Chatchaval Jiaravanon for $150 million, had recently undergone a months-long redesign for both print and digital.

CNBC reported that Vox Media, parent to SBNation, Recode, New York Magazine and The Verge, among other properties, was preparing to furlough about 100 staffers. In an email to staff obtained by Adweek, the company’s CEO Jim Bankoff expressed disappointment that discussions about furloughs was leaked, adding: “Consistent with my note last week, our goal is to prepare the company to weather the downturn, and its uncertain depth, while minimizing impact to our employees by trying to avoid layoffs and ensure health care benefits are protected in this difficult time.”

The L.A. Times, which expects to lose half of its ad revenue this year, also placed workers on furlough. According to the L.A. Times Guild, the furloughs are on the business side of the house, bucking the conventional mode of putting journalists on the frontlines of layoffs and furloughs.

An internal memo from the @latimes' Chris Argentieri is even more apocalyptic:

"Due to the unexpected effects of COVID-19, our advertising revenue has ***nearly been eliminated***."https://t.co/woFkwduCm0

And, finally, while not a media layoff or furlough story, we see perhaps something more devastating to the industry. Amazon is cutting commission rates from affiliate links. Many large outlets like BuzzFeed, Vox Media and the New York Times, to everyday blogs and individual writers earn significant revenue from affiliate links. CNBC reported that rates are being slashed for a variety of categories. Baby products, for example, saw commission rates of 4.5% slide to 3%. Furniture rates drop from 8% to 3%.

And this was just media on Tuesday, a day that usually has no defining characteristic. For those affected yesterday, Tuesday was a dark day. But with dark, the saying goes, comes light. And there are pockets of light.

Axios, for example, rolled out an app Wednesday. Bloomberg started a new entertainment vertical. Here at Adweek, we’re introducing a podcast today on issues around D&I, we’re recommitting to our executive mentorship program and we’re four weeks in to producing a daily livestream on the challenges and opportunities facing our industry. Others have created a microloan service for journalists, and industry groups are banding together to help those in need.

Some media companies are still hiring. The Washington Post, for example, typically has 55-65 job openings, according to the company’s head of HR Wayne Connell. It currently has 58 openings.

If you’re in media and have been laid off or furloughed due to the coronavirus, we want to hear from you. We created MediaTogether as a place for folks to tell their stories, and connect with our audience. Because while we are currently in the middle of a storm and the winds continue to shift, we will come out of this. We will push on through the day, the week. We will get back to a routine, where Tuesday means it’s just the day before Wednesday.