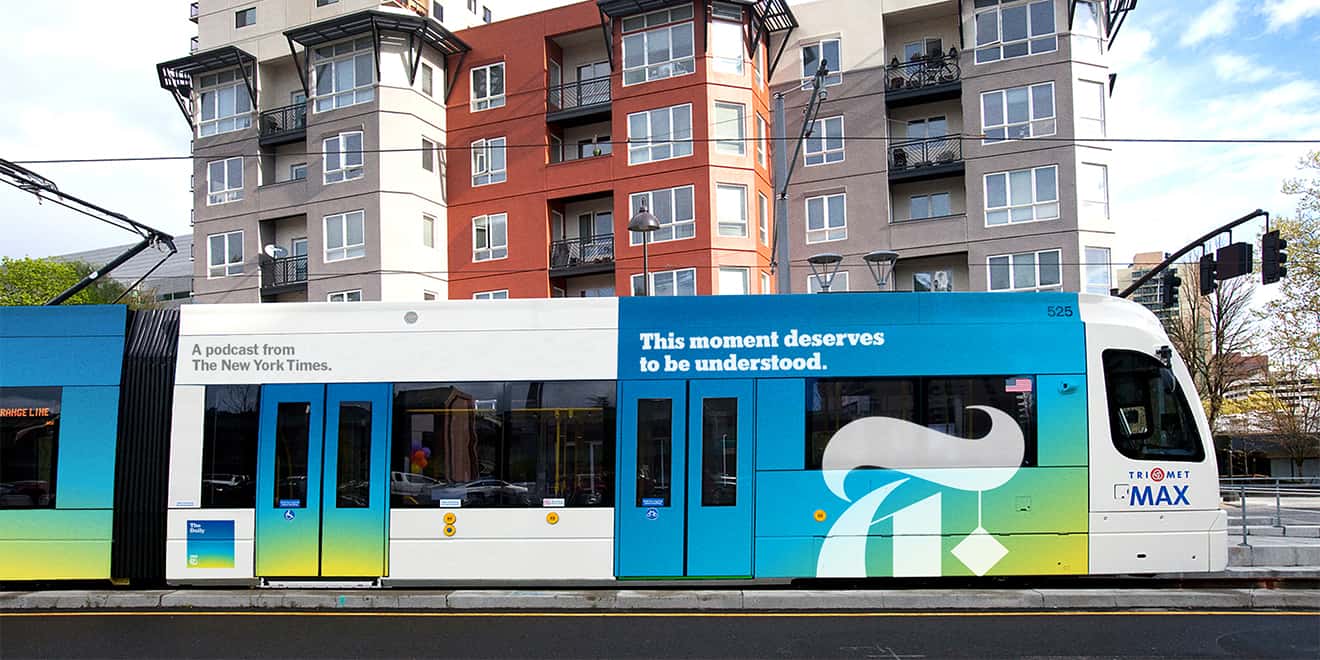 With endless programming to choose from, countless ways to consume media and never-ending social distractions, The New York Times has broken through the noise to win over consumer attention. The Daily, its first daily news podcast, which showcases the NYT’s reporting and reporting process, established a new way of storytelling by showing the journalism behind the publisher’s biggest stories.

The 160-plus-year-old newspaper has not only created a brand for consumers to add to their routine but a whole new revenue stream in The Daily. Podcast listening has crept up over the years, reaching 51% of Americans last year, according to Pew Research Center.

“Bringing a fresh perspective from what the industry was used to has allowed The Daily to revolutionize the way they are selling the show itself to both listeners and media buyers across the country,” said Sean King, evp of Veritone One.

Feeding off the energy after Donald Trump was inaugurated, the NYT saw a need for a daily news podcast to “let real people talk and listen to the country,” said Lisa Tobin, executive producer for audio at the NYT. The trouble was: Where does one even start?

“It was a blank slate,” Tobin said. “What should The New York Times sound like? It was an extremely open-ended question.”

Some Times desks had created their own one-off podcasts before, like The Book Review, but the NYT had never made a concerted effort to launch an audio team and strategy. The Daily changed that. 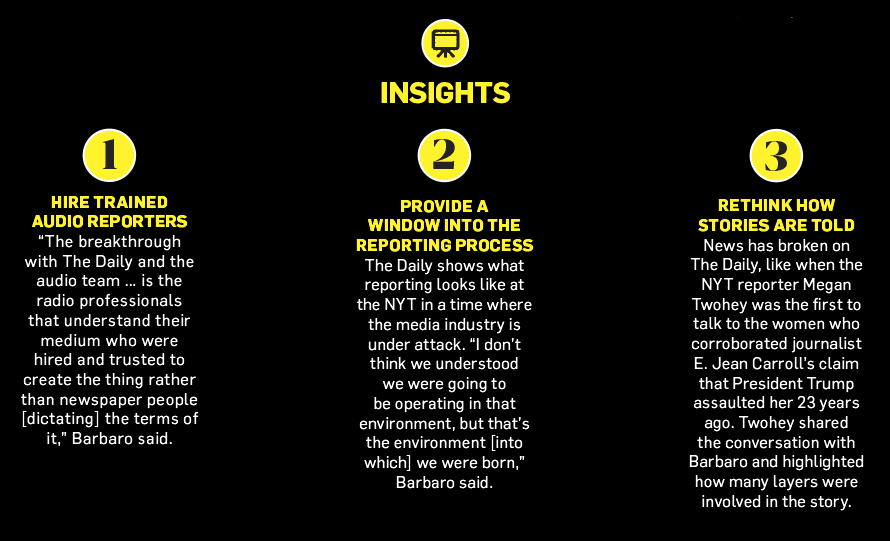 The team began hiring staffers with deep experience in audio production and grew a team that paved the way for other NYT podcasts and—as one of the first daily news podcasts—for the industry. After The Daily went live, Vox Media released its own daily explanatory news podcast called Today, Explained, and The Washington Post created Post Reports.

The Daily team narrowed the show’s focus under the same three prompts: Is there a question to be answered? Is there a big idea to be explored? Is there a story to be told? The style of each episode, which focuses on a particular story or topic, usually involves a beat reporter walking the listener and host Michael Barbaro through the news and what went into covering that story.

Barbaro usually sticks to the same format with each episode since the podcast first dropped in 2017—“From The New York Times, I’m Michael Barbaro. This is The Daily.” He joined the NYT in 2005 and had been on the national politics beat before taking on the podcast.

“We realized our colleagues are not just great storytellers in print,” Barbaro said. “There’s just something really special about hearing a reporter talk about how they thought about the story and what they learned along the way.”

The Daily was released on Apple and made available on the NYT’s website and additional podcast providers, then expanded onto radio stations, such as WBEZ and KCRW, under a partnership agreement with American Public Media. It grew further when the NYT developed its first marketing campaign for the brand in July last year and has resulted in spinoff series, such as the recently announced The Latest, which covers developments around the impeachment inquiry against President Trump.

Recently, the show reached a milestone of more than 1 billion downloads.

“The Daily is a monster hit with an astonishingly valuable audience,” Mark Thompson, president and CEO of the NYT, told investors this month in the same earnings call where he announced that the NYT’s digital ad revenue was $54.7 million, a main driver in audio ad revenue.

The Daily is carried on over 200 radio stations throughout the nation, and inspired a show on FX (and streaming on Hulu) called The Weekly. The NYT has also released other news-based podcasts, including Caliphate, a series based on reporting about the Islamic State.

“Much like the evolution of audiobooks, The New York Times is fulfilling the reader experience but in a format that is on-demand and hands-free for the time-challenged, multitasking decision-maker,” said Laura Perritte, vp of client and media services at media agency Centro. 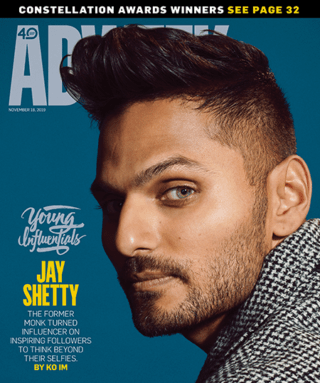 Click for more from this issue
This story first appeared in the Nov. 18, 2019, issue of Adweek magazine. Click here to subscribe.
@SaraJerde sara.jerde@adweek.com Sara Jerde is publishing editor at Adweek, where she covers traditional and digital publishers’ business models. She also oversees political coverage ahead of the 2020 election.