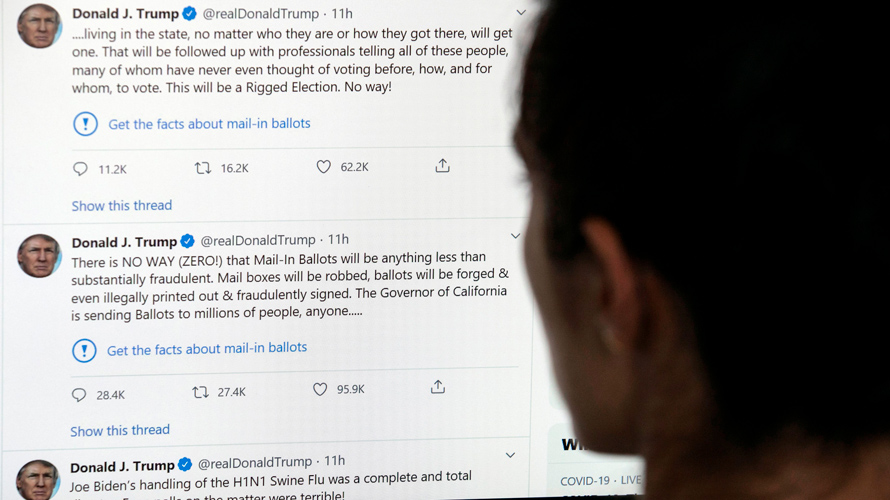 President Donald Trump is not happy with Twitter, usually his favorite social media platform. On Tuesday night, he accused Twitter of “interfering” with the 2020 presidential election and “stifling free speech” by placing a fact-check label on two of his tweets.

It’s the first label Twitter has put on one of the president’s tweets, and the most aggressive action the company has taken after years of being hands-off about its most notorious user.

Many Twitter users had expressed consternation with the platform Tuesday for allowing Trump to tweet unfounded murder allegations against MSNBC host and former Congressman Joe Scarborough. But that was not the controversy Twitter moved to address.

Twitter’s unprecedented action came against two tweets about mail-in ballots, labeling them as misleading under a new initiative that started rolling out in February to combat misinformation. The labels link to a page curated either by Twitter’s own staff or “external trusted sources” with additional information about the content of the tweet.

“These tweets … contain potentially misleading information about voting processes and have been labeled to provide additional context around mail-in ballots. This decision is in line with the approach we shared earlier this month,” a company spokesperson told Adweek. The spokesperson declined to comment further when asked about the president’s complaints.

Until now, Twitter has tried to avoid wading too much into politics, despite being the president’s communication tool of choice. The platform even went so far as to ban all political advertising (though, as brand marketers suggested at the time, such ads represented only a small part of its business).

However, Twitter is a private company and can do what it wants with speech on its platform. It can put any label on the president’s tweets or otherwise warn users that his words words may be misleading. It can even delete them.

“If there is a First Amendment issue here at all, it’s the issue of threatening the use of presidential authority to compel a private platform to speak or to refrain from speaking,” said Frank LoMonte, director of the Brechner Center for Freedom of Information at the University of Florida. “Nobody has a ‘free speech right’ to insist on using a non-governmental platform to convey his message.”

Twitter can also ban users who may be in violation of its code of conduct, such as conspiracy theorist Alex Jones of Infowars, who was banned in 2018 after he livestreamed himself insulting a CNN reporter on Twitter-owned Periscope, and former Breitbart editor Milo Yiannopoulos, who got the boot in 2016 for harassing actress Leslie Jones.

Trump has run afoul of the First Amendment on Twitter

The Knight First Amendment Institute at Columbia University has taken Trump to court over his own First Amendment abuses on Twitter—and won. The Second Circuit Court of Appeals ruled in July that the president could not block his critics on Twitter because his account is considered to be a public forum created by the government, and therefore he can’t grant or deny access based on individuals’ viewpoints.

“The First Amendment only applies to actions by the government,” said Katie Fallow, senior staff attorney at the Knight Institute. “So it violates the First Amendment when the president blocks people on Twitter, but not if a private person does the blocking. And Twitter is not a government entity, so the First Amendment doesn’t apply to Twitter’s decision to flag content or even ban users.”

Flagging Trump’s tweets, she adds, is not tantamount to censorship. None of the president’s tweets have been deleted. “All it does is give Twitter’s own view of the merits of his tweets,” she said. “Generally, the view is that the answer to harmful speech is more speech, not censorship.”

Judge Barrington D. Parker said something very similar in his ruling against Trump in this case. “In resolving this appeal, we remind the litigants and the public that if the First Amendment means anything, it means that the best response to disfavored speech on matters of public concern is more speech, not less.”

In recent months, tech companies have come under increased political scrutiny about the role they play in American society. The DOJ could be weeks away from suing Google over antitrust concerns, and talk of breaking up large tech companies like Google, Facebook and Amazon has been a consistent talking point from Sen. Elizabeth Warren and prominent Democrats.

And while the president can’t block people from reading his Twitter posts, lawmakers have tried to discourage the platform from labeling or otherwise censoring it. Recently, some members of Congress have proposed changes to Section 230 of the Communications Decency Act, the cornerstone of internet regulations that protects online platforms from liability for user-generated content. One bill from Sen. Josh Hawley (R-Mo.) specifically grants Section 230 protections for platforms that “provide content moderation that is politically neutral,” a conditionality that many see as an unconstitutional viewpoint-based regulation.

But, Trump’s not-so-veiled threats to regulate Twitter are vague, political and fairly empty: In reality, there’s little he can legally do to punish the platform.

“It goes without saying that the federal government has zero authority over the content of what a social media platform chooses to publish,” LoMonte said, noting that the FCC has some very limited control over federally licensed broadcasters, but beyond that cannot control publisher content.

The Knight Institute’s executive director, Jameel Jaffer, put out a statement saying that it is “disturbing that the president misunderstands the First Amendment so fundamentally.” He said the only First Amendment issue at hand “arises from the president’s threat to punish Twitter in some way for fact-checking his statements.”

A strange boast about advertising

The Washington Post posited that Parscale’s advertising efforts on Facebook could be the reason Trump was elected. “The campaign poured money into Facebook, sending thousands of versions of tweaked ads to maximize response,” national correspondent Phillip Bump wrote in 2017. “Then it won the presidency by a margin narrow enough that Parscale (and Facebook) can justifiably take credit.”

After Twitter placed fact-checking labels on Trump’s tweets, Parscale issued a statement accusing the social media platform of interfering with the election out of “clear political bias.”

“Partnering with the biased fake news media ‘fact checkers’ is only a smokescreen Twitter is using to try to lend their obvious political tactics some false credibility,” Parscale said on Tuesday.

He further claimed the campaign had “pulled” its Twitter advertising months ago, when in actuality the platform had banned all political ads in October. However, Twitter didn’t put a fact-check label on that statement.

Parscale also didn’t mention the value he previously saw in advertising on Twitter. At the time the platform banned political ads, he derided that decision, saying it “walked away from hundreds of millions of dollars in potential revenue” and called it an attempt to “silence conservatives.”

Despite repeated criticisms of the platform, Trump is still incredibly active from his @realDonaldTrump account, tweeting constantly to his 80.3 million followers.

Twitter faced widespread outcry on Tuesday after users demanded the platform take action over a separate series of tweets about Scarborough, in which the president posted unfounded allegations that the MSNBC host and former congressman had murdered a former staffer, Lori Klausutis.

“Please delete these tweets,” Timothy J. Klausutis begged Twitter CEO Jack Dorsey in a letter dated last week, which was later amplified by Kara Swisher in her New York Times column, where she urged Twitter to equally apply its rules—which cover individuals and brands on the platform—to the president.

However, Twitter has not taken any action against those tweets so far.

“We are deeply sorry about the pain these statements, and the attention they are drawing, are causing the family,” a Twitter spokesperson said in a statement. “We’ve been working to expand existing product features and policies so we can more effectively address things like this going forward, and we hope to have those changes in place shortly.”