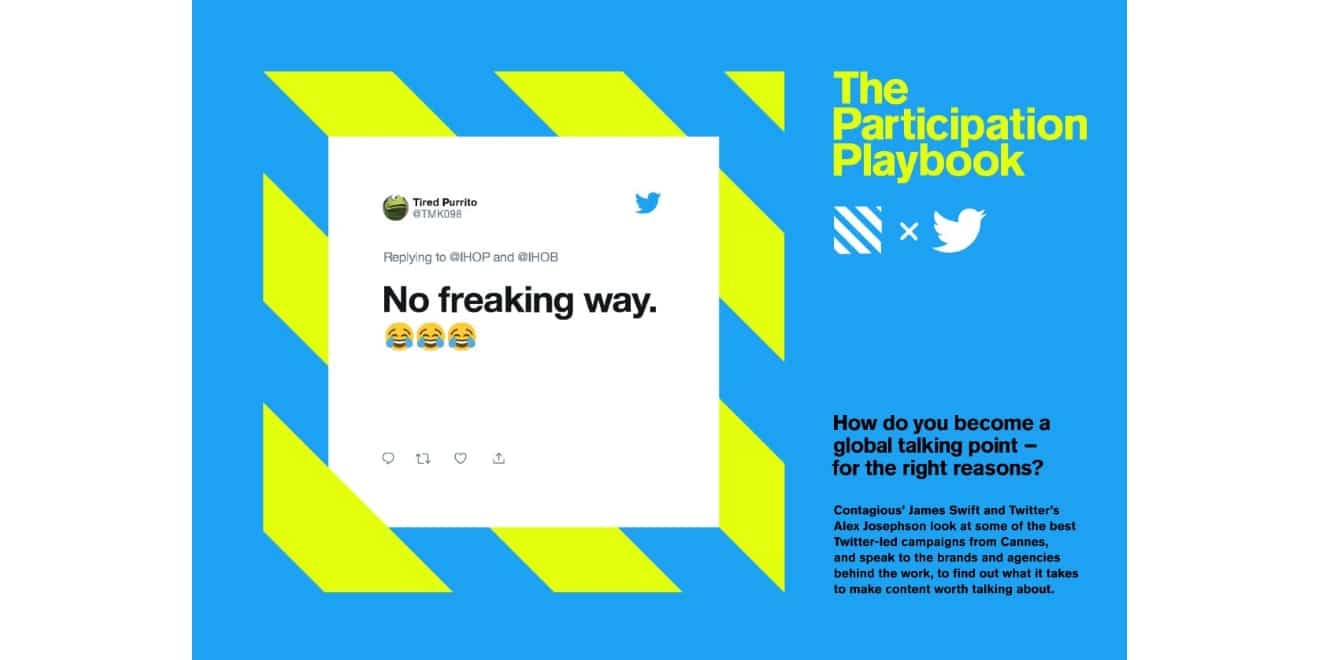 Twitter and Contagious studied 1,856 Twitter-centric entries submitted at Cannes between 2014 and 2018 - Credit by Twitter/Contagious

Twitter said nearly one-half of the Grand Prix- and Gold-winning campaigns at last year’s Cannes Lions International Festival of Creativity included the social network, so it teamed up with intelligence provider Contagious to study 1,856 Twitter-centric entries submitted at Cannes between 2014 and 2018.

The two companies said they identified six “pillars” that defined the type of work consumers want to engage with, share and elevate, and they then spoke with some of the brands and agencies behind that work and developed The Participation Playbook, a report they introduced on the main stage at Cannes earlier this month.

Twitter head of global brand strategy Alex Josephson said in an email, “Cannes Lions is the epicenter of creativity in advertising. Today, creativity remains the most important aspect of any ad campaign or marketing effort. Nielsen reports that the creative in a campaign accounts for 47% of any sales attributes achieved. Much of our industry has fallen victim to the guilty pleasure of buying turnkey cheap reach and relying on antiquated measurement systems to determine the ‘success’ of a campaign, but marketers who are falling victim to this behavior are turning a blind eye to the importance of getting people to care about their brands for genuine reasons—and building true brand equity.”

The six pillars follow, along with campaigns that illustrate them.

Take out your AirPods

Twitter and Contagious said that anywhere people go to talk, brands should go to listen, adding that the social network is a valuable resource for marketers wanting to know what is on the minds of their audiences.

A good example of this is The Blank Edition, from Lebanese newspaper An-Nahar and Impact BBDO Dubai, which won a Grand Prix in the print and publishing category, marking the first Cannes Grand Prix award for the Middle East and North Africa region.

Contagious senior writer James Swift wrote, “From an advertising perspective, I think this campaign is an interesting example of how Twitter has encouraged new ideas in old media. Brands now seem more willing to try innovative outdoor and print ideas because they know they have a chance of finding a much bigger—and more interested—audience on Twitter. But, more generally, I like how The Blank Edition facilitates the same dynamic that helped Twitter first make its mark on culture, by giving people a forum to voice their frustrations with those in power.”

Twitter and Contagious said creating content is one thing, but brands that really make an impact become conduits for communication, adding that people will share content if it tells someone that they know how they’re feeling or they know something about who they are, or it implies some other sort of insider knowledge or status.

They highlighted Dream Crazy, from Nike and Wieden + Kennedy, which took home the inaugural Grand Prix in the new Entertainment for Sport Lions.

Josephson wrote, “Nike kicked off this campaign with a single tweet, followed by a full campaign and full-length film featuring Colin Kaepernick—not just on Twitter, but on every platform, website and medium around the world. But it saw twice as many views on Twitter in the first 24-hours than any other platform. The campaign’s power comes from Nike’s ability to connect to the conversation around Kaepernick as this underdog figure that people were rooting for and make him the face of this brand message that could live outside of the context of the brand and be universally resonant and empowering to any consumer.”

Get beyond first impressions

First, impressions were key for brands and agencies, and then engagements became the favored metric, but Twitter and Contagious wrote, “What will you measure or how will you define success next time you create something on Twitter? If all you can think of is retweets and comments, then you’re likely thinking too small.”

They put the spotlight on The Day IHOP Flipped the Script, from IHOP and Droga5, which won a Silver PR Lion.

Josephson wrote, “Last summer, when IHOP posted a tweet teasing that it would be changing its name to IHOb, the conversation on Twitter erupted, generating over 1 million tweets about the campaign in 10 days. But one of my favorite things about Twitter is that people come to the platform to talk about what’s happening, and what’s talked about on the platform can drive real-world results for brands. We want our brand partners to reach for those real-world outcomes, as well. In this case, the campaign didn’t just inspire reactions on the platform, but it paid off in real sales: IHOP was selling half a million burgers per week at its peak. And as reported by YouGov, three months after the end of the campaign, unaided ad awareness for IHOP was still 50% higher than it had been prior to the campaign.”

The two companies said some of the biggest successes on Twitter came from ideas “that were unburdened by great expectations,” and not everything a brand does must “spread to the far corners of the platform and break out into culture.”

They highlighted Bagelgate, from Kraft Heinz Philadelphia Cream Cheese and Droga5, which won the Gold for Mobile.

Josephson wrote, “Droga5 and Kraft Heinz struck a nerve amongst bagel lovers on Twitter with Bagelgate, joining the conversation and calling attention to the fact that Apple’s and Unicode’s bagel emoji lacked cream cheese. Positioned as an injustice to bagel eaters everywhere, the activation drove conversation and outrage that inspired Apple and Unicode to actually change the ‘naked’ bagel emoji to a bagel-with-cream-cheese emoji. Something as small as an emoji can drive significant conversation with and engagement from your audience.”

Brands that spoke with Twitter and Contagious said letting corporate tones or jargon leak into their messaging was the fastest way to spoil conversations.

Josephson wrote, “The reputation Wendy’s has built on Twitter is due in large part to the conversational, funny, human voice it has created. With Keeping Fortnite Fresh, Wendy’s demonstrated once again how well it can flex to a voice that its core audience wants to be in conversation with. People were heavily engaged and enthralled by its authentic ‘gamer’ tone of voice. Even competitive dining brands were tweeting at them in awe.”

Remember: No one cares

Havas reported in its 2019 Meaningful Brands survey that people would not care if 77% of brands disappeared tomorrow, and Twitter and Contagious said this indifference was the starting point for effective work, singling out All In Promo from Noblex and David Buenos Aires, which won the Gold for Creative Effectiveness.

Josephson wrote, “Argentinian electronics brand Noblex announced an interesting promise to its Twitter followers: If Argentina didn’t qualify for 2018 FIFA World Cup Russia, Argentinians who had purchased 4K TV sets would get full refunds. It sold out of the TV sets online and extended its #AllInPromo campaign event when Argentina was in real jeopardy of not qualifying for the World Cup. At the campaign’s end, Noblex made $11 million in online TV sales, and Argentina qualified for the World Cup. Here, Noblex managed to tie its brand to something it knew people were passionate about. That, in turn, gave an entire nation of people a reason to care about and root for their brand alongside the country’s football team.”