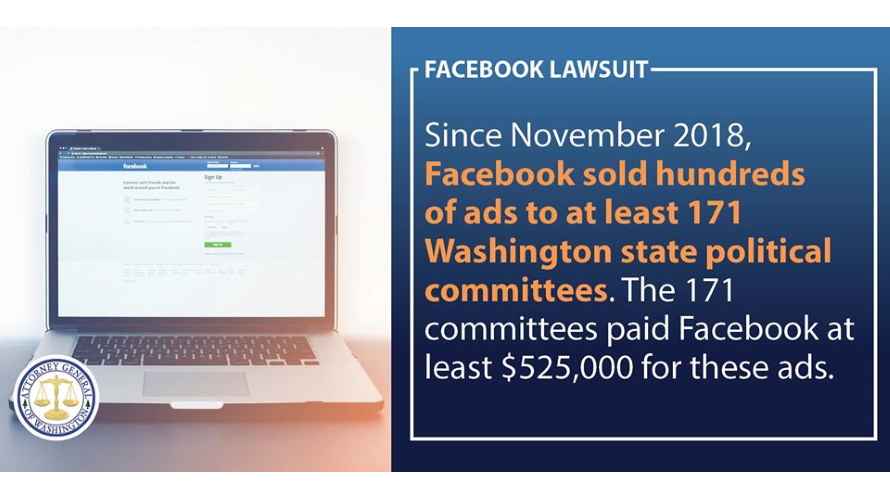 Ferguson filed a similar suit against the social network in June 2018, and it was resolved that December, when Facebook paid a $200,000 penalty and $38,000 to reimburse the state’s legal costs and fees.

According to Ferguson’s office, even though Facebook decided on its own at the end of 2018 to stop accepting ads related to state or local elected officials, candidates, elections or ballot initiatives, this has not been the case.

Ferguson cited reports by blog The Stranger and The Seattle Times that Facebook has continued to sell ads to political committees in the state.

His office wrote, “Since November 2018, Facebook sold hundreds of ads to at least 171 Washington state political committees. The 171 committees paid Facebook at least $525,000 for these ads. Facebook ran these ads without maintaining the legally required information, as our transparency laws require.”

Facebook called the dispute an ongoing legal matter, saying that it has worked closely with local authorities and will continue to do so.

The social network added that its policy banning ads that are targeted to Washington state and reference local elected officials, candidates, elections or ballot initiatives is still in place, and it took steps to bolster enforcement of that policy.

The Washington state Public Disclosure Commission adopted specific rules for digital political advertisers last November, requiring Facebook and other platforms to maintain information on political ads so that it is available for public inspection.

That information includes: the name of the candidate or measure being supported or opposed; the dates the ads ran; the name and address of the sponsor behind the ads; the total cost of the ads; who paid; and the method of payment used.

Ferguson’s office said that while Facebook makes information about political ads in Washington state and elsewhere publicly available via its Ad Library, the information shared by the social network does not meet all of the requirements laid out by the state.

The suit against Facebook seeks the imposition of a civil penalty, an injunction requiring the social network to comply with the PDC requirements and reimbursement of the state’s legal costs and fees.

Ferguson concluded, “Whether you’re a tech giant or a small newspaper, those who sell political ads must follow our campaign finance law. Washingtonians have a right to know who’s behind the ads seeking to influence their vote.”