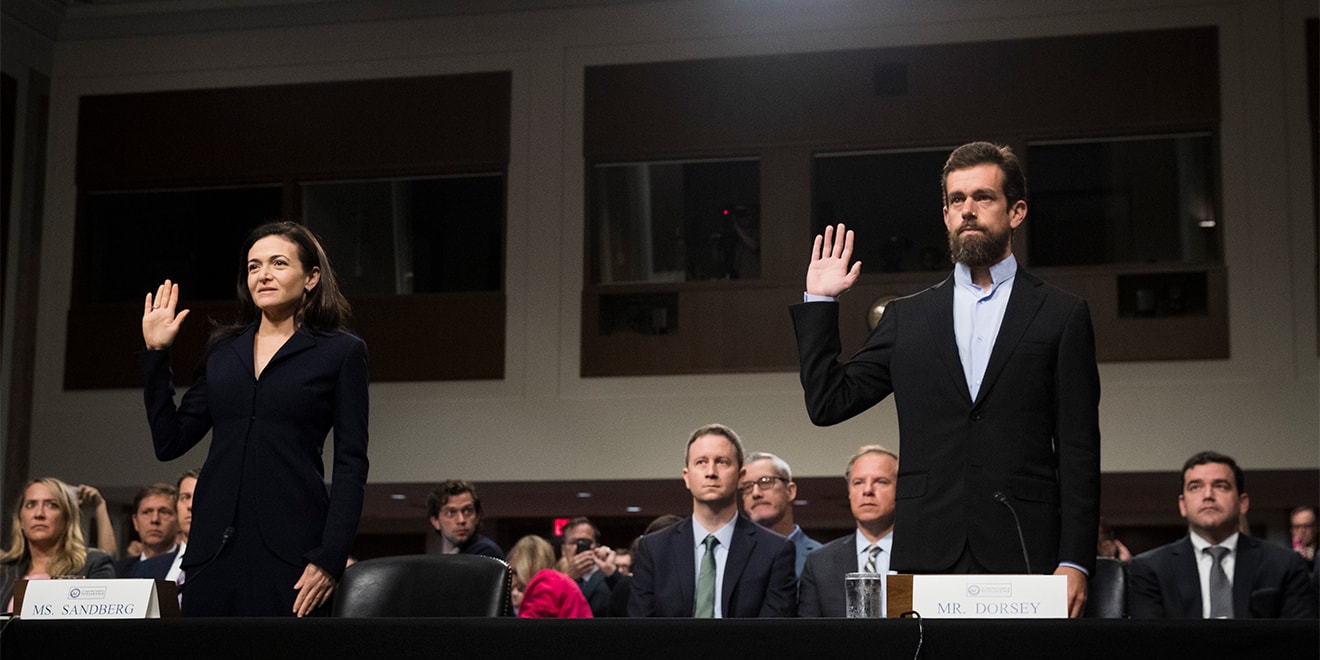 Sheryl Sandberg and Jack Dorsey testified in front of the Senate Intelligence Committee on Wednesday.

Facebook chief operating officer Sheryl Sandberg and Twitter CEO Jack Dorsey appeared before the Senate Intelligence Committee Wednesday morning to answer a range of questions about the social media companies’ policies, their handling of disinformation and how they were addressing bots and other “bad actors” on the platforms. Representatives for Google did not attend after declining to send a high-ranking executive.

The questions from both Republicans and Democrats ranged from tedious to contentious. Executives discussed and defended their companies’ data privacy rules, their responses to disinformation campaigns and their approaches toward removing hate speech. Several lawmakers, including Sen. Mark Warner (D-Virginia), the Senate committee’s vice chairman, said regulation was coming.

Here are some of the major takeaways from Sandberg’s and Dorsey’s comments during Wednesday’s panels.

Both Sandberg and Dorsey conceded Wednesday that bots constituted a major problem that their platforms were still struggling to address. Sandberg said that while Facebook’s rules prohibiting fake accounts were clear-cut, the company had more trouble identifying them.

Both platforms are still relying heavily on third-party groups and individuals to handle the vast disinformation issues rather than taking an in-house approach.

Dorsey, whose answers throughout the day were less rehearsed than Sandberg’s, said he believed it was “useful” to label certain accounts as automated, but said the benefits of that were limited to how accurately Twitter’s systems are able to identify those accounts. He also suggested that Twitter’s imperfect ability to identify bots could lead some users to believe that accounts not labeled as bots were human-run.

One obstacle to identifying and removing bots is that sophisticated actors can script a bot’s actions to make it appear human-like, Dorsey said. Dorsey said Twitter challenges between 8 million and 10 million suspicious accounts every week to prove they’re human and prevents another 500,000 every day from logging in to the platform.

Among the senators concerned with bots and foreign interference was Susan Collins (R-Maine), who was targeted by the Russia-linked Internet Research Agency. She said tech companies like Facebook and Twitter need to do a better job of informing users who are targeted by bots or disinformation campaigns, a point that both Sandberg and Dorsey agreed with.

Combating disinformation falls to outside actors

In the morning hearing, Sandberg highlighted Facebook’s partnerships with third-party fact-checking organizations as the best way to handle disinformation. Dorsey said that Twitter needed to do a better job of amplifying verified journalists on the platform who debunk false information.

During testimony highlighting the benefits of collaborating with researchers, Sandberg pointed out that a private security firm helped identify Iranian actors in the most recent revelation of foreign interference.

The testimony showed that both platforms are still relying heavily on third-party groups and individuals to handle the vast disinformation issues rather than taking an in-house approach. Dorsey said relying on its own users to report violations was a “matter of scale” and conceded that the platform needed to do more to combat harassment. But the details of what “more” will look like in practice remained unclear.

Sen. Kamala Harris (D-California) and Sandberg had a tense exchange during which Harris asked Sandberg about policies against hate speech on the platform. She referenced a 2017 ProPublica report that found that groups like black children could be disparaged on Facebook because they were not counted as a “protected class.”

Sandberg said that Facebook had since changed what she said was a “badly written policy.” In an email to Adweek, a Facebook spokesperson said the original definition was “too narrow” and that the platform’s community guidelines now take more ambiguous attacks against different groups of people into consideration when enforcing its rules.

All eyes are on targeted advertising practices

From Republicans and Democrats alike, it’s clear there’s an appetite for regulations that will affect how the social media platforms operate.

Several lawmakers expressed skepticism in the companies’ usage of personal information to provide advertisers with targeting capabilities. While both Sandberg and Dorsey reinforced their companies’ commitment to user privacy—and both emphasized that the data users share on the social media sites belong to the users themselves—there was a deep focus on targeted advertising capabilities that have spread political disinformation.

Sandberg said that misleading or discriminatory ads had “no place on Facebook,” but she declined to provide information about what Facebook was doing to prevent it.

Sen. Warner repeatedly asked whether the platforms would be more transparent about data value that users provide to Facebook and Twitter, questions that Sandberg and Dorsey did not directly answer.

Immediately following Wednesday morning’s panel, the Department of Justice announced in a statement that it would begin working with state attorney generals to look into allegations that the platforms “may be stifling competition and intentionally stifling the free exchange of ideas on their platforms.”

On Wednesday afternoon, Dorsey appeared before the House Committee on Energy and Commerce, where members of both parties yet again asked questions about Twitter’s alleged conservative bias. Conservative lawmakers have repeatedly expressed concern that conservative voices have been censored. Twitter has denied these claims, and Democratic lawmakers criticized the line of questioning about so-called conservative bias as a political tactic aimed at stirring up Republican support in the upcoming midterms. While regulation wasn’t a major focus of discussion in the morning, several members brought it up in the afternoon. For example, Rep. Peter Welch (D-Vermont) said a “fundamental question” for the committee is whether public officials should pass laws to protect people from hate speech and false information. He asked if the “rules of the road” should be decided on a company-by-company basis or by Congress.

From Republicans and Democrats alike, it’s clear there’s an appetite for regulations that will affect how the social media platforms operate. Warner already introduced the Honest Ads Act, which would require disclosures for online political advertising. Other legislation, such as the CONSENT Act proposed by Sen. Edward Markey (D-Mass.) would require consumers to provide consent before tech companies can collect and use their data. There could also be future interest in a federal version of California’s new data protection law that passed in June and is scheduled to go into effect in 2019.

@kelseymsutton kelsey.sutton@adweek.com Kelsey Sutton is the streaming editor at Adweek, where she covers the business of streaming television.
@martyswant martin.swant@adweek.com Marty Swant is a former technology staff writer for Adweek.