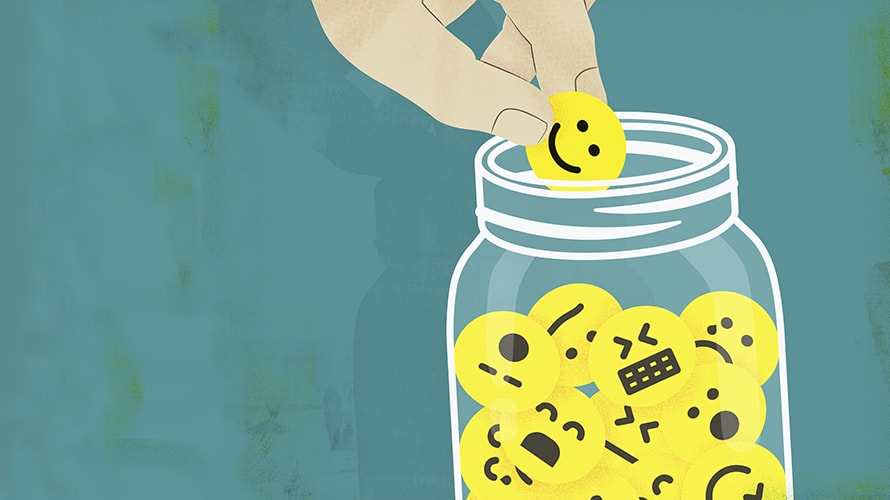 There's a new way to reach a target audience beyond age and gender demographics. - Credit by Getty Images

As marketers increasingly look for new ways to reach their target audience beyond age and gender demographics, publishers such as The New York Times are rolling out a surprise new offering: advertising based on emotions.

The New York Times predicts how its stories make a reader feel (opinion and news) using machine learning and insight garnered from asking readers how they felt after reading its content. The publisher then sells ad space around those stories based on those indicated emotions. For example, the Times scores an article based on how likely it is to make the reader feel self-confident.

While the Times discussed emotion-based advertising during last month’s NewFronts presentation, the company has already been offering it for a year. They aren’t the only ones, either: USA Today rolled out something similar that predicted what tone the piece would take based on keywords back in 2017, and The Daily Beast is testing an offering that predicts what state of mind readers are in when consuming content on the site.

Buyers seem to be split on the idea. While some consider it to be yet one more data point to target a specific audience, skeptics call it just another type of contextual advertising touted as a shiny new metric that’s a bit too abstract to rely on.

One thing that everyone does seem to agree on is that buying a particular emotion shouldn’t be a brand’s only campaign strategy. Even the Times concedes that its offering is usually sold as part of a broader package.

Bre Rossetti, svp, communications strategy at Havas Media Group, said that relying only on this metric would be “really shortsighted.” But at least with this option, buyers can now go to publishers and ask to be in these targeted areas on their site, adding another layer to campaigns in a time when advertisers want to be in brand-safe environments. 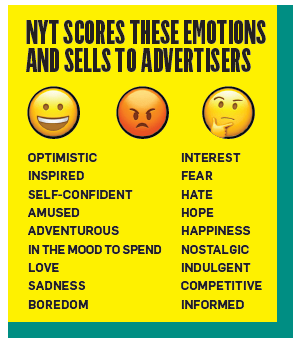 This gives buyers another level of security that their advertisements will appear alongside appropriate content. “There are different levers we can pull now, and it’s creating a better relationship between media owners and media agencies,” Rossetti said.

The Times’ 18 emotions that are “for sale” out of the 30 it scores include adventurous, in the mood to spend, sadness and self-confident, the last of which is popular with socially responsible brands targeting women. It’s a list of options that purposely isn’t too expansive, said Allison Murphy, svp of ad innovation. “Brands don’t necessarily want 5,000 emotions to choose from,” she added, nor are they interested in duplicated feelings like happiness versus ecstatic.

When USA Today launched its program, execs first assumed readers would skew more toward uplifting, positive news. They quickly realized, however, that readers “don’t really discriminate” and read everything. “This gives us an opportunity to target them when they are in the right contextual environment and the right state of mind,” said USA Today’s Kelly Andresen, svp and head of GET Creative, the company’s content studio.

The offering allows one more variable to reach that targeted audience, Andresen said. With brand storytelling, theoretically, this could be one more metric to align content that’s relevant to the brand’s message, said Sabrina Jordan, group media director, GSD&M.

Some buyers think this strategy could be a step toward a more brand-safe environment, too. “As everyone whitelists, it’s another safety barrier to protect what’s around news content,” said John Wagner, group director, published media for PHD.

Taking note of these offerings, The Daily Beast has waded into testing that predicts where its users are spending their time and how frequently they are coming back to get a better picture of what their consumption habits are like on the site to give their behavior a bit more context.

“Instead of trying to guess emotions, it’s understanding the type of advertising messages that are going to resonate with their behavior on The Daily Beast,” said Daily Beast CRO Mia Libby.

Jordan said she wasn’t quite convinced that targeting emotions was anything different than “contextual targeting, which has been around since the dawn of digital advertising. Is this potentially going to drive a lift? For our clients, especially as we look at media metrics, the jury’s out.”

Murphy noted that given the Times’ output of about 2,000 articles every week, advertisers don’t have trouble finding a story that theoretically makes readers feel the emotion that they’re looking to target. However, this could be a barrier for a smaller publisher with fewer stories published each day, Murphy said.

As the Times waits to see whether the offering gains traction, it will continue expanding into this direction of “ad innovation,” Murphy said, prioritizing transparent products for consumers. “We have to build new things. Sometimes it will work—and sometimes it won’t.” 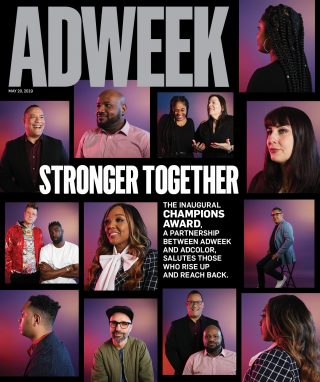 Click for more from this issue
This story first appeared in the May 20, 2019, issue of Adweek magazine. Click here to subscribe.
@SaraJerde sara.jerde@adweek.com Sara Jerde is publishing editor at Adweek, where she covers traditional and digital publishers’ business models. She also oversees political coverage ahead of the 2020 election.