The glow in the dark cover will come to life when the lights are down. - Credit by Yuliya Kim

Subscribers to Country Living will be treated to a glow-in-the-dark issue this month.

With a special UV coating to make the cover glow, subscribers will have one cover in the light and another that will reveal itself in the dark, which is a partnership with Go RVing.

In the light, a family appears around a campfire. When the lights go off, a mason jar with fireflies appears as does the saying, “Away we glow.” 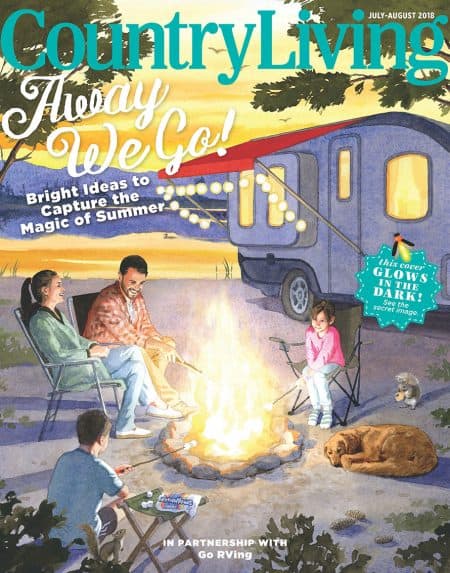 The Country Living cover looks different to subscribers when the lights are up.

“When the glow-in-the-dark mockups first arrived in our editorial office in Birmingham, the staff gathered in the prop closet, turned out the lights and collectively squealed when the firefly image appeared,” Rachel Hardage Barrett, editor-in-chief of Country Living, said in an email to Adweek. “I love picturing our subscribers enjoying the same sort of excitement with their kids when the magazine arrives.”

The magazine will be sent to subscribers, which account for 96 percent of the magazine’s total audience of 10.6 million, a spokesperson for the magazine said. The cover on newsstands will feature watermelons and the 101 Joys of Summer.

Go RVing also has a two-page ad spread inside and an ad on the back of the magazine. Country Living declined to give the cost.

“It gives us a lot of exposure and it’s certainly a very unique cover for us,” said Karen Redfern, vp of brand marketing and communications for Go RVing.

This is the third consecutive year Go RVing worked with Country Living on a high-impact cover unit. Last year, the magazine featured a die-cut steering wheel, and the year before, a map of the United States that could be peeled open.

“It seems like every year it gets a little more sophisticated,” Redfern said.