The below post is part of our 2014 Social TV Year-in-Review guest post series and is written by SnapStream CEO Rakesh Agrawal.

Social TV: Will This Ugly Duckling Grow Into a Beautiful Swan?

It all starts with the product.

And today, the combination of TV and social networking is, at best, an awkward one.  Tapping into the social conversation around a TV show, interacting with a TV show and sharing TV moments are all terribly disjoint experiences.  All this friction equals opportunity for companies who can build products and features that simplify social TV — both for consumers and for advertisers and content creators.

Let’s dive into one consumer scenario of “social TV”, to see why I call it an ugly duckling:

1) I turn on my TV with my remote control(s) (Note: my focus is social + TV, I won’t even get into how complex this simple step still is!)

2) Perhaps I’m looking for something to watch… so I flip through channels, until I find something good.

3) OK, now I’m watching TV!  I find myself thinking, “What are other people saying about this show I’m watching?” So I load up Twitter on my phone.

4) Hmmm. What hashtag or keyword will tap into the conversation about this TV show?  Maybe the official hashtag is on the screen (like on The View below)? If not, I have to try some different searches until I find the right one. 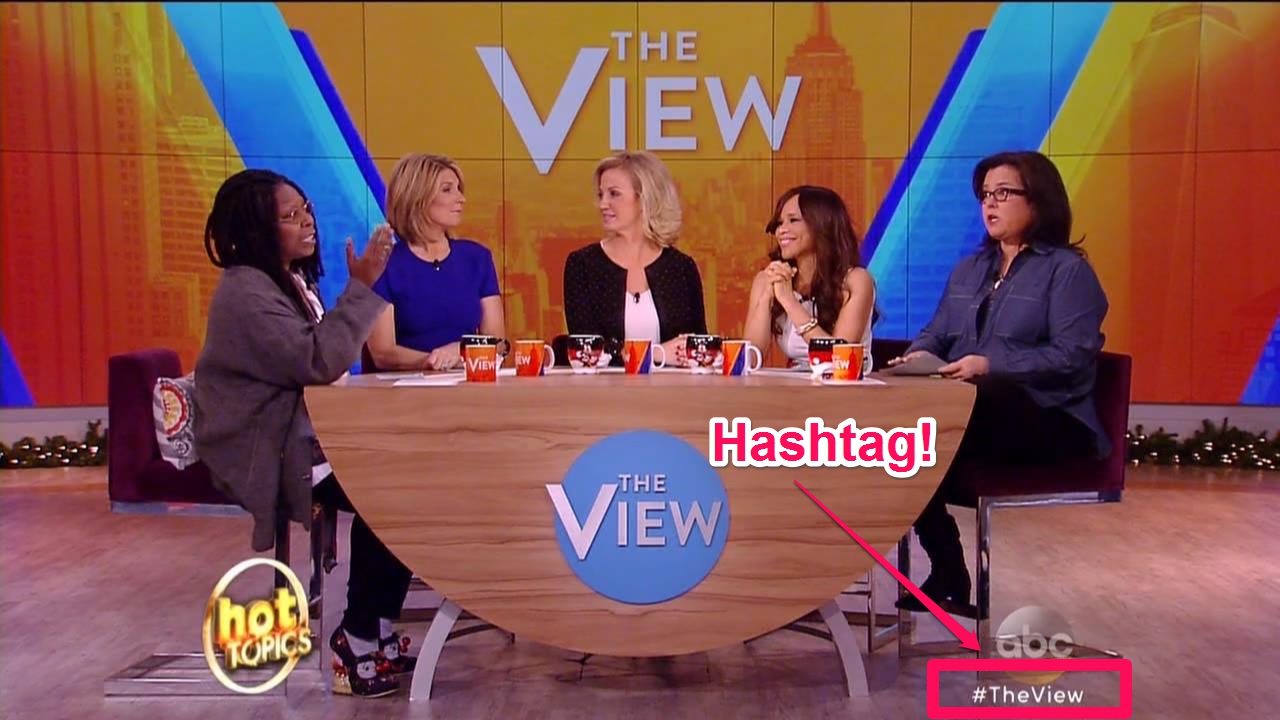 What? I have to type in a hashtag?

5) OK, got it… my second screen is now active!  I swipe up and down through the feed.  I favorite posts that capture my sentiments (“high five!”).  Reply to posts I disagree with.  Maybe I post my own thoughts (with the right hashtag!).

6) I just realized that my post would be best expressed with a picture or a video.  So I take a picture of the screen and use that in my post.  Or record a Vine and post that to Twitter.

If you don’t see it from the walkthrough above, let me be clear: this is all way too complex!  Most people won’t even bother.

And in spite of this, TV shows gets millions of Tweets and Facebook posts.

How could this all be simpler and better?  Let me count the ways:

1. Why isn’t there a way to see the top TV shows being watched right now so it’s easier to find something interesting?  Like the way Amazon shows best sellers.

3. Sharing a moment of TV?  It should be as easy as sharing a NYTimes link on Twitter or Facebook.  TV is still too ephemeral.

4. Wouldn’t it be great if, when I send a tweet out about a show, it didn’t feel like I was putting a message in a bottle and throwing it into the ocean?  I’d love it if a show could more effortlessly see every tweet about their show (with context) and then reply to each one.

I believe that all of these things, and more, will happen.  I believe that we will see products that deeply intertwine traditional television and social networks.  And I also think all this friction means that we’ve only begun to see what will eventually TV and Twitter merge.

On the consumer side of things, here are some of the attempts I saw to bring together traditional TV and social networks:

– Comcast began integrating Twitter signals into the program guide on their X1 set-top box.  This begins to chip away at the TV discovery problem using social networking. I have this on my home cable service, and it’s a good start, but I know more can be done here. 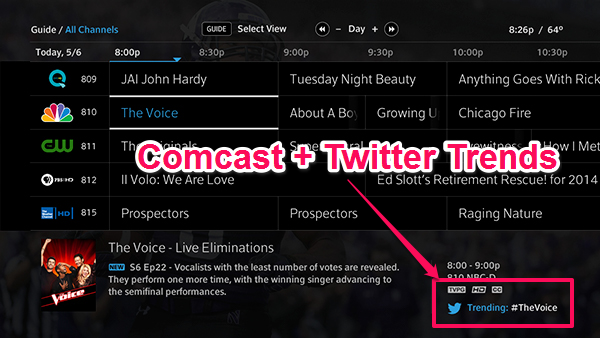 – Whipclip and Clippit both launched at the end of 2014, Whipclip with $20M in funding!  Both want to make it easier for consumers create and share TV clips in real-time.

– Twitter did an amazing job creating feeds during the World Cup.  Here’s what it looks like when you don’t have to go hunting for the conversation: 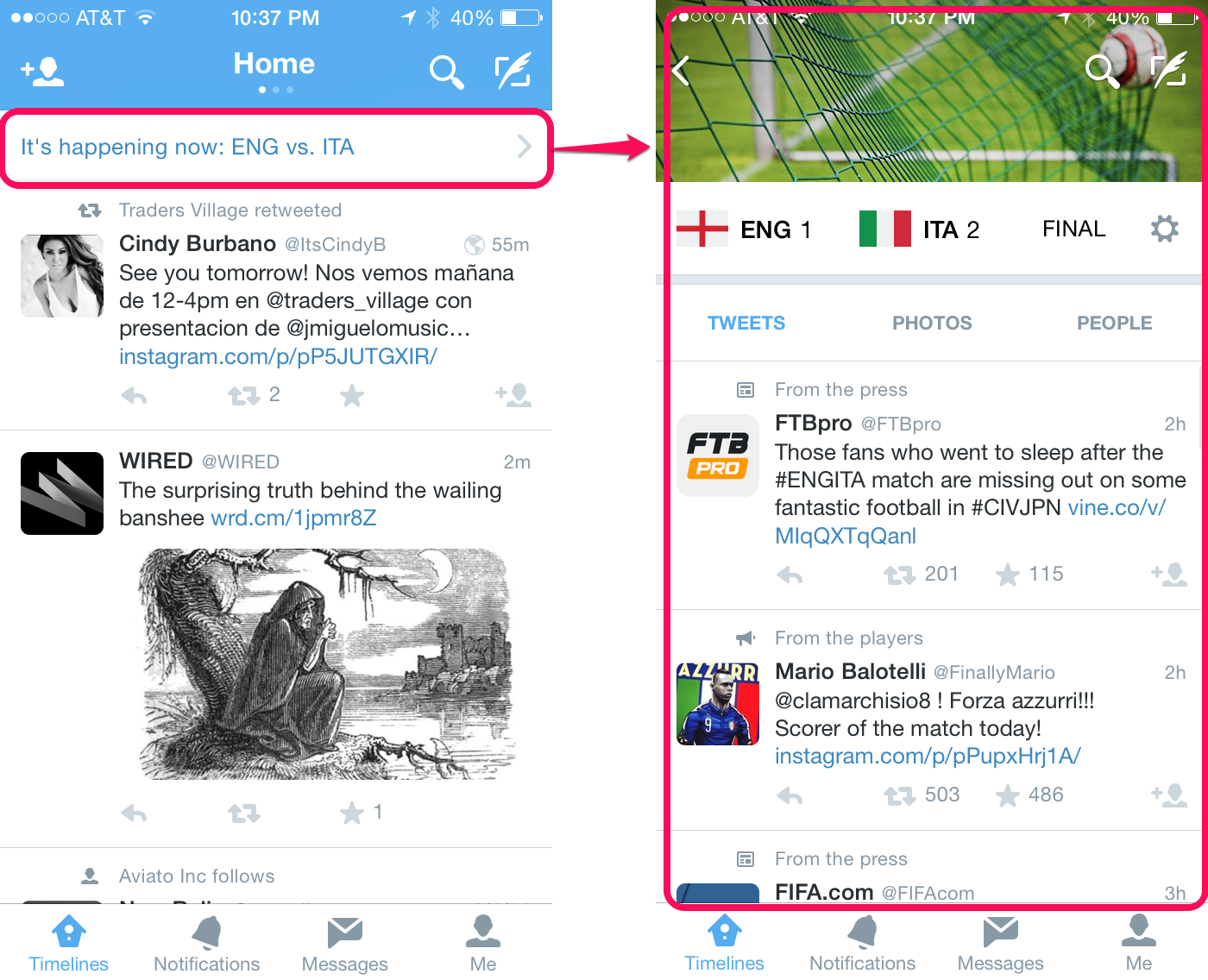 – SnapStream (my company) integrated social into its DVR appliance: We now allow advertisers and content creators to see Twitter conversations about any TV show side-by-side with the TV show. One example: 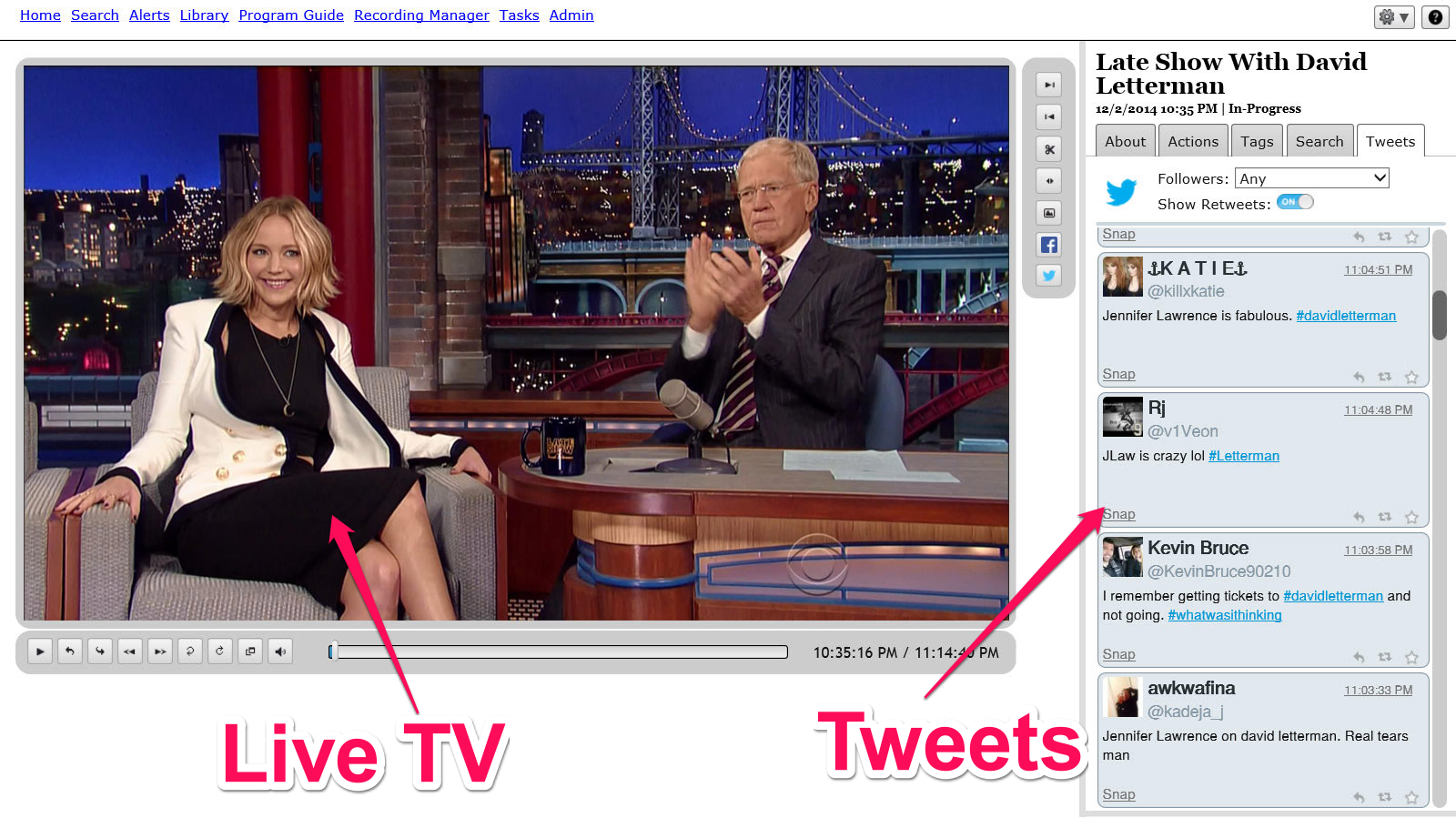 And what’s coming in 2015 that could advance the TV + social experience?

– Native Videos on Twitter: At their recent analyst day, Twitter made it clear that native video (beyond support for 6-second Vine videos) was coming soon — specifically in Q1 2015.  This will take friction out of the process of watching videos on Twitter and increase Twitter’s ability to drive video views.

– Twitter Curated Events: Also at Twitter’s analyst day, they talked about doing what they did for World Cup for more events worldwide.  Making the process of joining a conversation around an event or TV show is essential to social TV moving ahead.

– Facebook TV Content Recognition: Facebook announced automatic content recognition for TV shows in May of 2014 but I don’t think this ever shipped. Look for this in 2015.  This feature also promises to make it easier for users to participate in the conversation around TV shows.

– SnapStream: We’re going to continue our focus on building an essential enterprise tool for social TV.  One example of what we’re working on: Linking Facebook public pages to corresponding activity on television (like we do for Twitter today).

These are just a few of the things that I see on the horizon.  I still think it’s early days for social + TV and I see a lot of opportunity to combine social and traditional TV together in ways that are simple and intuitive.  I think we’ll look back on what is considered “social TV” today and laugh as how primitive it was.